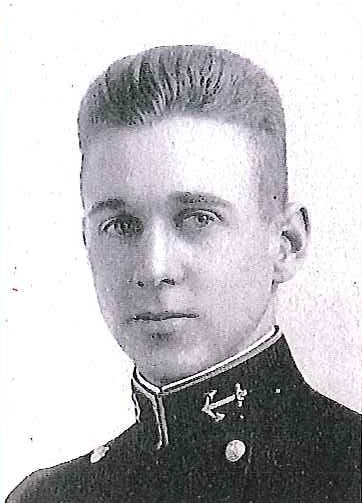 Francis Wyse Benson was born in Pikesville, Maryland, a suburb of Baltimore on April 21, 1895, son of the late Admiral William S. Benson USN, and Mrs (Mary Augusta Wyse) Benson. He attended public schools of New York City and Portsmouth, Virginia; Parochial School in Charleston, South Carolina; and Gilman’s School in Baltimore and St. Johns College, Annapolis, Maryland. He entered the US Naval Academy in June 1912 and as a Midshipman was a member of varsity gymnastics team and played class soccer and lacrosse. He was graduated and commissioned Ensign in March 1917, shortly before the United States entered World War I, and subsequently attained the rank of Captain to date from June 20, 1942. He was transferred to the Retired List of the Navy on July 1, 1950, and advanced to the rank of Rear Admiral on the basis of combat citations.

Following graduation from the Naval Academy in March 1917, he joined USS New York, and served as a junior officer in that battleship until September 15, 1918. The New York operated during part of World War I with the British Grand Fleet as Flagship of Commander Division 9, Battle Force, Atlantic Fleet. Detached from the New York he served the last month of the war in USS Nebraska on North Atlantic convoy duty. After the Armistice, that vessel was engaged in transporting American troops from Brest, France, to the United States, and was decommissioned early in 1919.

His next ship was the destroyer Ludlow, in which he served as Engineer Officer until 1920 where he rejoined the New York for further sea duty until 1923. He subsequently served briefly in the Office of Naval Communications, Navy Department, Washington, DC, and aboard USS Mervine on the cruise to Australia and New Zealand, with the Fleet in 1925, and after the Nicaraguan revolution until 1928. After duty as Instructor of Electrical Engineering and Physics at the Naval Academy, he joined USS Trenton, serving first as her First Lieutenant, and later as Gunnery Officer.

After a tour of duty at the Naval Gun Factory, Washington, DC, he received his first command, the destroyer Twiggs, in 1935. He was transferred a year later to command of USS Dale. In February 1938 he became a member of the Board of Inspection and Survey for the West Coast, and in June 1939 was ordered to duty as Senior Aide to the Commandant of the Eleventh District, at San Diego, California. From July 1940 until August of the next year he served as Executive Officer of USS Milwaukee, operating first in the Pacific, and later in the South Atlantic, where after a special mission to the vicinity of the Azores, she was attached to the South Atlantic Neutrality Patrol Force.

In August 1941 he was ordered to supervise the conversion of SS President Hayes from luxury liner to the combat troop transport. Eight days after the Japanese Attack on Pearl Harbor the Hayes went into commission with Rear Admiral Benson as her first Navy Captain, from December 15, 1941 until July 1943. During that period of command, the Hayes plied between Honolulu and the West Coast, evacuating women and children from Hawaii; training Marines in amphibious warfare, and transporting them to Guadalcanal. On August 8, 1942 she disgorged more Marines on juxtaposed Tulagi Island, and for that landing, August 7-8, 1942, her Commanding Officer was commanded by the Secretary of the Navy.

He was later awarded a Gold Star in lieu of the Second Legion of Merit with Combat “V” for outstanding services “during operations against enemy Japanese forces in the Solomon Islands Area from August 1942 through June 1943. After directing his ship in repulsing a fierce attack by Japanese aircraft on August 8, 1942…..(he) capably commanded the President Hayes in eight subsequent voyages into the dangerous waters of Solomon Islands to deliver reinforcements and cargo to American forces….warded off a Japanese air attack on his vessel near Guadalcanal on February 17, 1943, and another off Rendova on June 30….avoided submarine attacks by skillful maneuvering on three occasions and twice come under the fire of enemy shore batteries….”

Relieved of command of Hayes in July 1943 after that Navy transport had made twelve trips to Guadalcanal, subject to repeated air attacks, Rear Admiral Benson became Deputy Chief of Staff to the Commander Amphibious Force, Seventh Fleet. From January to November 1944 he served as Assistant Chief of Staff and Operations Officer, and as such helped to plan and to activate the invasions of Lae, Finschavon, Arawe, Cape Gloucester, Saidor, the Admiralty Islands, Hollandia, Biak, Noemfour, Sansofor, Morotai, and Leyte.

For “exceptionally meritorious conduct….while serving on the Staff of Commander, Seventh Amphibious Force, during operations against enemy Japanese forces from July 1943 until October 1944….” he was awarded the Legion of Merit. The citation continues in part: “Working under difficult conditions with a limited number of personnel and ships….(he) rendered valuable services during the landings at Sansofor, Dutch New Guinea and Leyte, Philippine Islands….contributed materially to the success of the operations against the enemy….”

Two days before the landings, October 20, 1944, on Leyte Island, he commanded an American force which assaulted and captured Homonhon Island. There, as Harbor Control Officer, he controlled the traffic of vessels of the main assault force, which soon after surged ashore on Leyte, and for three years devoted himself to pushing the Japanese back to their home islands. On Februrary 11, 1945 he reported for dutyas Assistant Chief of Staff for Personnel to the Commandant, Eleventh Naval District. He received a second Letter of Commendation from the Secretary of Navy for outstanding services in that capacity from February 17, 1945 until January 11, 1946.

Rear Admiral Benson continued to serve in that assignment until relieved of all active duty pending his retirement on July 1, 1950.