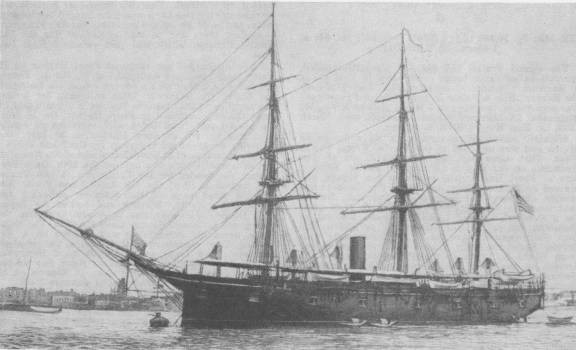 The capital city of New Jersey and of Mercer County. It is located at the head of navigation on the Delaware River about 28 miles northeast of Philadelphia.

The first Trenton, a wooden-hulled steam frigate, was laid down by the New York Navy Yard, Brooklyn, N.Y. in 1875; launched on New Year's Day 1876; sponsored by Miss Katherine M. Parker; and commissioned on 14 February 1877, Capt. John Lee Davis in command.

Trenton departed New York on 8 March 1877 and reached Villefranche, France, on 18 April. The following day, Rear Adm. John L. Worden broke his flag in her, and she became flagship of the European Station. A week after the American warship reached the Mediterranean, Russia declared war on Turkey. Consequently, Trenton and the other ships of the squadron alternated tours of duty in the eastern Mediterranean protecting United States citizens and other foreign nationals resident in or visiting Turkish possessions. On 9 May, she departed Villefranche for Smyrna, Turkey, and, but for a run to Salonika from 9 to 13 June with Marion, remained there until 25 August when the flagship left the eastern Mediterranean behind to return to Villefranche. Next, Trenton visited Marseilles for two weeks in mid-September; then steamed back to Villefranche on the 18th and remained there until Christmas Day when she put to sea to return to the eastern Mediterranean. Reentering Smyrna on the second day of 1878, she showed the flag there until 16 March when she sailed for Piraeus, the port-city for Athens, Greece. On 2 April, she got underway again for Villefranche, touching at La Spezia and Leghorn in Italy en route.

On 17 July 1878, she headed for Gibraltar and, on the 24th, exited the Mediterranean. She cruised north, visited Lisbon, Portugal; Cherbourg, France; and Yarmouth, England; and then returned to the Mediterranean, reaching Villefranche in mid-October. Trenton resumed her cruises between Mediterranean ports, adding Genoa, Naples, and Tangiers to her itinerary in the spring of 1879. In June, she again headed out through the Straits of Gibraltar to visit Portsmouth, England; Terneuzen, Holland; Antwerp, Belgium; and Copenhagen, Denmark. She was back at Villefranche late in September. In mid-November, she sailed to Gibraltar and waited there until 7 December for Constellation to arrive with Trenton's replacement crew. The warship remained in the western Mediterranean until early April 1880.

On the 3rd, she headed east once more. After stops at Naples and at Alexandria, Egypt, the warship began cruising the Aegean again. She visited Smyrna, Tenedos, and Chamak Kelessi in Turkey as well as Piraeus before returning to Villefranche on 25 May. After a visit to Marseilles on 7 June, the flagship left the Mediterranean for the third time during this deployment and made another cruise to English, Belgian, and Dutch ports.

Trenton returned to the western Mediterranean in August and operated there until 7 September 1881 when she sailed for the United States. She arrived in Hampton Roads on 12 October and, three days later, moved up the York River for the Yorktown Centennial Celebration. On 22 October, the warship departed Yorktown and the following day arrived in the New York Navy Yard, where she was decommissioned on 9 November.

Reactivated on 18 September 1883, Trenton departed New York in November for duty on the Asiatic Station. Steaming via the Mediterranean, the Suez Canal, Ceylon, and Singapore, she arrived at Hong Kong on 1 May 1884 to begin two years of cruising in the Far East. She visited ports in China, Korea, and Japan, carrying out various displomatic missions. On occasion, Trenton sent landing parties ashore in China and Korea to protect American nationals and other foreigners during periods of internal unrest. The warship completed this tour of duty in the spring of 1886; departed Yokohama, Japan, on 9 May; retraced her voyage back across the Indian Ocean, through the Suez Canal and the Mediterranean Sea, and across the Atlantic to reach Hampton Roads on 2 September. She entered the Norfolk Navy Yard , Portsmouth, Va., on 9 September and was decommissioned for repairs on the 17th.

On 16 May 1887, she was placed in commission once again. On 25 July, she exited Hampton Roads and headed south for Brazil. En route, Trenton stopped at St. Vincent in the Windward Islands and entered Rio de Janeiro on 10 September for a fortnight visit. After touching at St. Thomas on the return voyage, she dropped anchor in New York harbor on 3 November.

Almost three months later, on 30 January 1888, Trenton sailed for the Pacific. The voyage took her more than a year to complete, for she had to steam around Cape Horn at the southern end of South America. After stops at Panama and Tahiti, the warship reached Apia, Samoa, on 10 March 1889 and joined other units of the Pacific Squadron. Six days later, while still at anchor in Apia harbor, Trenton was wrecked by a hurricane. Before abandoning ship, however, her crew assisted in the rescue of Vandalia's ship's company. Trenton was declared a total loss, and her name was stricken from the Navy list on 13 April 1891. 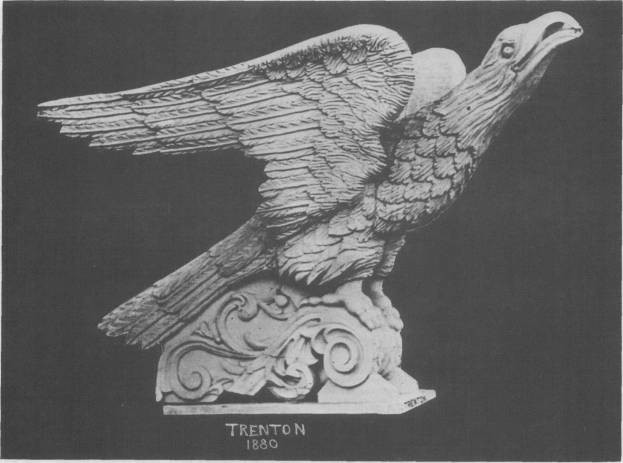 Caption: Trenton's eagle figurehead. The national eagle was a popular motif in the decoration of American warships.