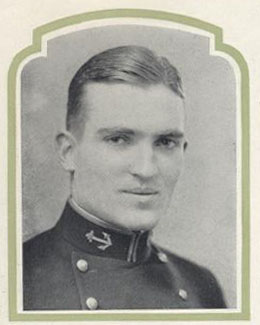 Halle Charles Allen, Jr., was born on 29 October 1904, in Denver, Colorado, the son of Halle C. Allen, Sr., and Mrs. (Grace White) Allen. He attended Hillsboro High School, Tampa, Florida, and the Marion Institute, Marion, Alabama, before his appointment to the US Naval Academy at Annapolis, Maryland, from Florida in 1923. While a Midshipman, he participated in soccer, swimming, and track, and was a Company Commander and Regimental Secretary. He was captain of the swimming team (1926-27); was a National Collegiate Champion, (1925-26), and an Intercollegiate Champion (1926-27). Graduated and commissioned Ensign on 2 June 1927, he attained the rank of Captain, to date from 20 March 1945.

Following graduation from the Academy in 1927, he was assigned to the USS Mississippi, attached to Battle Division FOUR, Battle Fleet. In March 1928 he returned to the Naval Academy for five months' duty in connection with the Olympic trials, and upon completion of the assignment reported again to the USS Mississippi for service until May 1931. He was aboard the USS Alden operating with Destroyer Division SIXTEEN, Battle Force, and Battle Force Destroyer, successively, between June 1931 and March 1934, interspersed with duty with the Navy Olympic Squad at the Naval Academy from February to June 1932. In March 1934 he transferred from the Alden to the USS Simpson, also serving with Battle Force Destroyers, for a two months' assignment.

He returned to the United States in June 1934 for instruction in applied communications at the Postgraduate School, Annapolis, Maryland. Completing the course in May 1936, he joined the USS Augusta, flagship of the Commander in Chief, US Asiatic Fleet. Detached from that cruiser in May 1939, he reported aboard the USS Enterprise. Between July 1940 and August 1943 he was assigned to the Bureau of Navigation, Navy Department, Washington, DC. For "outstanding service as Officer in Charge, School Assignment Section, Enlisted Distribution Division, Bureau of Naval Personnel, from October 1, 1940 until August 16, 1943..." he received a Letter of Commendation with authority to wear the Commendation Ribbon from the Secretary.

After brief temporary duty under instruction at the West Coast Sound School, Key West, Florida, in August 1943, he reported for fitting out duty in the USS Haraden, at the Boston (Massachusetts) Navy Yard, and upon her commissioning on 15 September 1943, assumed command. While commanding that destroyer he participated in the occupation of Kwajalein and Majuro Atolls and Eniwetok; the capture and occupation of Saipan; and the Leyte landings. Relieved of command of the Haraden in November 1944, he served as Communication Officer on the Staff of Commander Amphibious Group SEVEN until September 1945. He received a facsimile of, and Ribbon for, the Navy Unit Commendation to the USS Mount McKinley, awarded the officers and men who served on board that vessel during the period September 1944 to May 1945. He was personally awarded the Bronze Star Medal, with Combat "V", for "meritorious service as Communication Officer on the staff of Commander Amphibious Group SEVEN, during operations against enemy Japanese forces at Lingayen Gulf and on the Kerama Retto from November 1944 to May 1945..." The citation states further: "Displaying exceptional ability and resourceful judgment, (he) ably supervised the numerous and involved functions of the communications section of the command and maintained adequate and efficient communications between the forces ashore and afloat..."

Following temporary duty with Commander Service Force, Pacific, he reported in October 1946 to the Commander Service Division ONE HUNDRED AND FOUR. He continued in that staff duty until February 1946, when he was transferred to duty as Deputy Commander Service Squadron TEN, with additional duty as Chief of Staff and Aide. He remained in that capacity for two months, then reported for duty on the staff of Commander SEVENTH Fleet.

Between January and August 1947 he served with the US Naval Forces Western Pacific, and thereafter until December 1949 was attached to the Fleet Operational Readiness Division, Office of the Chief of Naval Operations, Navy Department, Washington, DC. From October to December 1949 he had additional duty as US Naval Aide and United Nations Representative. He next had duty as Commander Destroyer Division NINE, with additional duty in command of Destroyer Division NINETY-ONE. "For exceptionally meritorious conduct...(in that command) attached to the Japanese-Korean Support Group, and later Korea TWO Blockade Group, in operations against enemy aggressor forces in the Korean Area from 25 June to 20 October 1950..." he was awarded the Legion of Merit with Combat Distinguishing "V." He had also been awarded the Silver Star Medal by the War Department (General Order 49, dated 10/27/50), stating in part: Captain Halle C. Allen, Jr., USN...Commander Destroyer Squadron NINE, Joint Task Force SEVEN, United Nations Command, distinguished himself by conspicuous gallantry in the Inchon-Seoul operations during the period 15 September to 21 September 1950..."

In January 1951 he returned to the Office of the Chief of Naval Operations, where he served until March 1953 as Assistant Director, Programs and Budget, General Planning Group. From March 1953 to April 1954 he commanded the USS Juneau, an anti-aircraft light cruiser of the Atlantic Fleet. Since that time he had had duty on the Staff of Commander in Chief Allied Forces, Southern Europe, at Headquarters in Naples, Italy.

In 1938 he married Miss Eileen Hutchins of Shanghai, China, at Tsingtao, China.