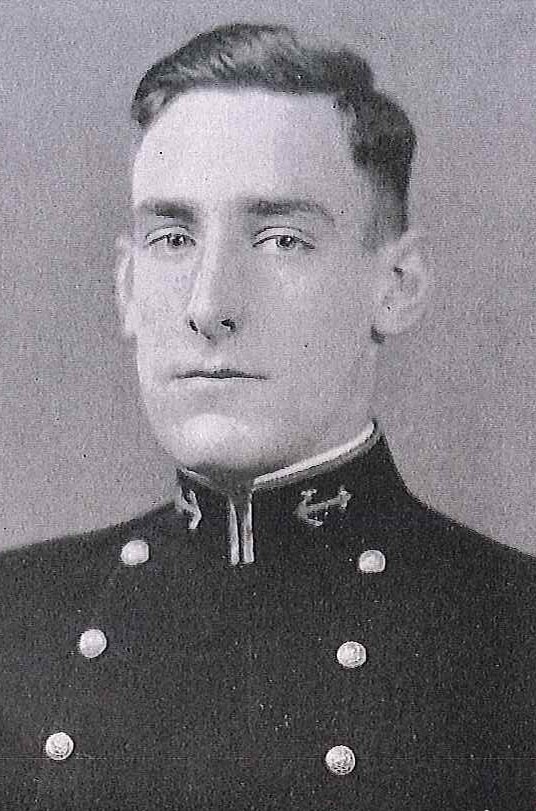 Captain Fitzgerald was born April 7, 1906 in Garrison, Maryland son of Charles Galt Fitzgerald and Mrs. (Muriel Tuckerman) Fitzgerald, both deceased. He attended St. James School, Hagerstown, Maryland, and Tome School, Port Deposit, Maryland, before entering the US Naval Academy in June 1925 by appointment of Senator T.H Carroway of Maryland. While a Midshipman he participated in intramural football and swimming. He was a member of the Plebe Crew in 1925 and managed the Crew his First Class year. He was graduated with the Class of 1929 and commissioned Ensign, advancing through the grades to the rank of Captain in May 1947. He reverted to his permanent rank of Commander on January 1, 1948, but his subsequent selection for Captain was confirmed April 21, 1949.

After accepting commission as Ensign on June 6, 1929, Captain Fitzgerald was assigned to USS Detriot and served as Watch and Division Officer of that cruiser until January 1931, when he was ordered to the Naval Air Station, Pensacola, Florida, for flight training. He was designated Naval Aviator on December 5, 1931 and he remained there for further instruction in aviation until February 1932. He served for a short time at Naval Air Station, Naval Operations Base, Hampton Roads, Virginia, and in June 1932 reported to Aircraft, Scouting Force, for three years of flying duty. He was then assigned to Naval Air Station, Naval Operating Base, Norfolk, Virginia, reporting in June 1935, and serving until June 1937.

Duty in connection with fitting out USS Enterprise (CV-6) preceded duty aboard that aircraft carrier after she was commissioned until June 1940. During the following year Captain Fitzgerald served with Patrol Squadron 33 as Flight Officer and was transferred in July 1941 to Patrol Squadron 32. In March 1942, he returned t the Naval Air Station, Norfolk, Virginia, for a year as Assistant Operations Officer, and later Operations Officer. Duty in connection with fitting out USS Intrepid, preceded duty aboard that carrier as Air Officer from her commissioning until November 1944. From the Intrepid he participated in the assault of the Marshalls (Roi-Namur); the assault on Palau air strikes on Mindanao, Leyte, Luzon, Formosa; assault on Leyte; Second Battle of the Philippine Sea; and the air strikes on Truk. His ship was torpedoed in the latter engagement.

Captain Fitzgerald returned to the United States and reported to the Naval Air Station, New Orleans, Louisiana, assuming command in January 1945. The following September he was ordered to USS Yorktown as Executive Officer. He served aboard that carrier until December 1946, and in January 1947 reported to the Armed Forces Staff College, Norfolk, Virginia for instruction until June of that year. In July 1947 he became Aviation Officer on the staff of Commander, Training Command, US Atlantic Fleet, in which duty he served until November 1948.

Captain Fitzgerald assumed command of USS Timbailier, in December 1948. He is now under orders to report to Bureau of Aeronautics, Navy Department, Washington, DC in November 1949.

Captain Fitzgerald is a member of the Green Spring Valley Hunt Club of Garrison, Maryland.