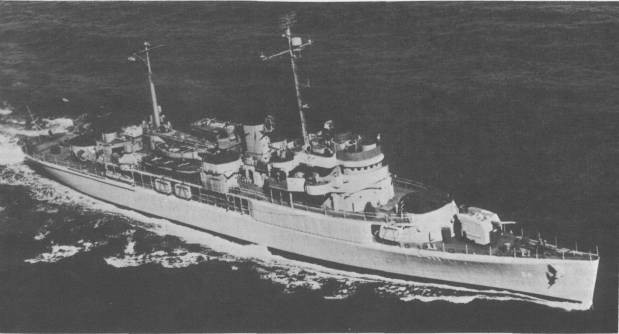 Caption: Timbalier (AVP-54) about 1946, in the overall haze-gray color scheme first applied to many naval ships near the end of World War II. Small bow numbers were retained for some time after the war ended.

A bay on the coast of Louisiana near New Orleans.

Timbalier departed the Seattle area on 20 June and reached San Francisco two days later. Shifting to Alameda, the seaplane tender loaded stores and airplane spare parts before heading for San Diego on 26 June. She conducted trials and shakedown off the west coast through 27 July, when the ship steamed south for Panama. She transited the canal on 3 August and proceeded up the coast to New York.

Timbalier remained at the New York Naval Shipyard into the autumn. She got underway on 8 November, put into Norfolk the next day, and remained in the vicinity of Hampton Roads into December.

On the 3d, Timbalier got underway from Hampton Roads and proceeded to San Juan, Puerto Rico, where she arrived on 7 December and reported for duty to the Commander, Fleet Air Wing (FAW) 11. Based at Trinidad, the seaplane tender operated in the Caribbean and off the east coast of the United States, tending the Martin P5M Mariners of FAW 11 until late 1954.

Timbalier was decommissioned on 15 November 1954 and placed in the Atlantic Reserve Fleet. Her name was struck from the Navy list on 1 May 1960, and the seaplane tender was subsequently sold on 20 December 1960 to Panagiotis Kokkinos, of Piraeus, Greece.