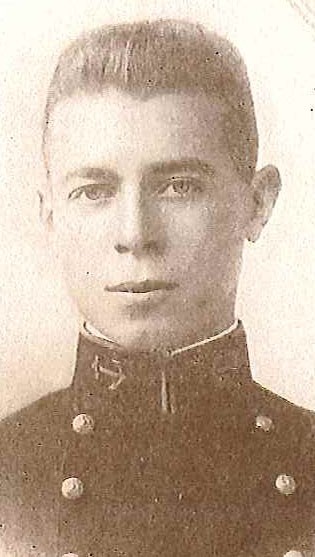 Lieutenant Commander Carpenter, born in Hopbottom, Pennsylvania, on March 6, 1894, attended grade schools in Scranton, Pennsylvania, and was graduated from high school in McKeesport, Pennsylvania, before his appointment to the US Naval Academy at Annapolis, Maryland from the Thirieth District of his native state in 1912. Graduated and commissioned Ensign in June 1916,he received temporary promotion to Lieutenant, both grades, during the World War; was commissioned in those ranks as of 1919 and 1920, respectively, and was promoted to Lieutenant Commander, September 1, 1926.

After graduation in 1916, Lieutenant Commander Carpenter joined USS Wyoming which later operated with the British Grand Fleet during the World War. Detached from that battleship in May 1921, he assisted in fitting out USS California and served in that battleship from her commissioning, August 10, 1921, until May 1922. In June of that year he reported to the Naval Air Station, Pensacola, Florida, for flight training. Designated naval aviator December 21, 1922, he had duty at the Pensacola Air Station until April 1923 when he reported to Aircraft Squadrons, Battle Fleet, serving with Observation Squadron 1, and later with Fighting Squadron 1, attached to USS Aroostook, until May 1925 when he returned to the Naval Air Station at Pensacola where he was an instructor the following year.

Lieutenant Commander Carpenter served as Executive Officer of USS Stoddert from June 1928 until September 1929 when he joined the aircraft tender Langley. In June 1930 he was transferred to duty as Commander of Scouting Squadron 3, based on the aircraft carrier Lexington, serving with that Squadron until April 1931. In May of that year he reported for duty at the Fleet Air Base, Coco Solo, Canal Zone, serving as Executive Officer of that Base and in command of the Ferry Flight of Patrol Squadron 5, until July 1933, and as operations officer of Aircraft Squadrons based on Coco Solo until May 1934. He then served as Navigator of the aircraft tender Wright until the following November.

In April 1935, Lieutenant Commander Carpenter reported for duty at the Naval Air Station, San Diego, California, and in September of that year was designated Inspector of Naval Aircraft at San Diego, serving in that assignment until July 1936. He was transferred to the Retired List of the Navy on October 31, 1936, and relieved of all active duty.

A destroyer, USS Carpenter (DD 825) has been named in honor of the late Lieutenant Commander Carpenter. Mrs. Donald M. Carpenter, sponsored the vessel named for her husband when it was launched at the plant of the Consolidated Steel Corporation of Texas, Orange, Texas