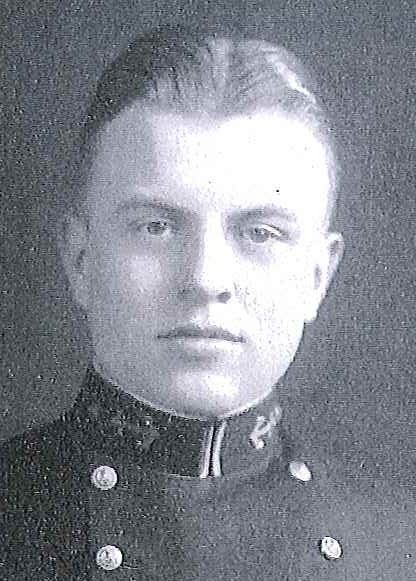 Walter Eugene Baranowski was born in Oshkosh, Wisconsin, on July 16, 1911. He attended Oshkosh State Teachers College before his appointment to the US Naval Academy, Annapolis, Maryland, on appointment from his native state in 1930. He was graduated with distinction, sixth in a class of 458 graduates, received the degree of Bachelor of Science and a commission as Ensign in the US Navy o date from May 31, 1934. Through subsequent advancement, he attained the rank of Captain, to date from November 1, 1952.

After graduation from the Naval Academy, he served first in the USS Saratoga (CV-3) an aircraft carrier operating in the Pacific, his duties those of a junior officer in the gunnery department. From June 1935 until June 1936 he was on board the USS Kane (DD-35), in which he had engineering and gunnery duty, and for three years thereafter was a student at Massachusetts Institute of Technology, from which he was awarded the degree of Master of Science in Naval Construction in June 1939. Having transferred from the Line of the Navy to the Construction Corps, he was next assigned to the Navy Yard, Norfolk, Virginia, where he served in Production Planning until August 1943, during which the Construction Corps amalgamated with the Line and became an EDO officer.

From August until May 1944 he was Assistant Supervisor of Shipbuilding at Pascagoula, Mississippi, then reported to the Bureau of Ships, Navy Department, Washington, DC, where he was concerned with Auxiliary Type ships throughout the remaining period of the war and until December 1947. At that time he was transferred to Headquarters, Potomac River Naval Command, Washington, where until March he was engaged in preparing texts for the Engineering Training Course.

He served as Industrial Manager for the Seventeenth Naval District, at Headquarters, Kodiak, Alaska, from March 1949 until November 1950, after which he was assigned to the Naval Shipyard, Boston, Massachusetts, for duty until March 1953 as Industrial Relations Officer. On March 18, 1953 he returned to Washington, DC, for duty with the Armed Forces Special Weapons Project, and while so assigned served as Senior Member of a Board to Recommend Officers for the Nuclear Engineering (Effects) Course in October 1953. Detached in August 1954, he reported a month later of the Office of the Supervisor of Shipbuilding, USN, and Naval Inspector of Ordnance, New York City.

Under orders of July 6, 1956, he next had a tour of duty at the Portsmouth Naval Shipyard, Portsmouth, New Hampshire, and on May 16, 1960, was ordered to the Bath Iron Works, Bath, Maine, where he will be Supervisor of Shipbuilding.