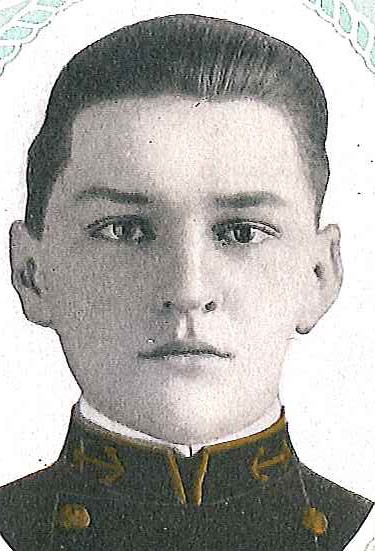 Bernhard Henry Bieri was born in Walnut Lake, Faribault County, Minnesota, on June 24, 1889. He attended public schools in Wells, Minnesota, before his appointment to the United States Naval Academy, Annapolis, Maryland, from Minnesota in 1907. Graduated in June, 1911, he served at sea as then required before commissioning, and was commissioned Ensign in March, 1912. He subsequently advanced to the rank of Rear Admiral to date from April 23, 1942; served in temporary rank of Vice Admiral for three years, and attained that rank on March 1, 1949 to date from December 11, 1945. He transferred to the Retired List of the Navy as of June 1, 1951.

After graduation from the Naval Academy in 1911, he served successively in USS Delaware, USS Nashville, USS Montana, and USS Virginia. In the latter he served at Vera Cruz, Mexico, during the occupation in April, 1914. In April, 1916 he transferred to USS Texas, battleship, which operated with the Grand Fleet during the first World War. In June, 1919, while serving as First Lieutenant, he was ordered to duty as Aide to the Commandant, Fifth Naval District, Norfolk, Virginia. In July, 1921 he was assigned additional duty as personal Aide to the Commandant while he was a member of the official US Commission to visit South America and to attend the Centennial of Peruvian Independence in Lima (Admiral Hugh Rodman).

When detached from the Fifth Naval District, he transferred to the West Coast, reporting to Commander Destroyer Squadrons, Pacific Fleet, for assignment. He commanded USS Bailey from January to June, 1922, and was Commanding Officer of USS Corry until March, 1925. Reporting to the Office of the Chief of Naval Operations, Navy Department, Washington, DC, he had duty in the Communication Office from May, 1925 to December 1927. Returning to sea duty, he served as Navigator consecutively of USS Utah until August, 1928, and USS Texas until April, 1931. He again reported to the Navy Department for duty as Head of the Detail Section, Enlisted Personnel Division, Bureau of Navigation (now Bureau of Naval Personnel). From August, 1933 he served as Executive Officer of the USS Altair, and was detached in June, 1935.

After completing the senior course at the Naval War College, Newport, Rhode Island, in May, 1936, he remained there to serve on the staff until January, 1938. Reporting for duty as Operations Officer on the staff of the Commander Battleships, Battle Force, he served aboard the flagship West Virginia until June, 1939. Transferring to similar duty in USS California, flagship of Commander Battle Force, US Fleet, he continued that duty after January 1, 1940 when the Commander hoisted his flag in USS Pennsylvania as Commander in Chief, US Fleet, and when he was redesignated in February, 1941 Commander in Chief, Pacific Fleet.

On March 2, 1941 he assumed command of USS Chicago. That cruiser, under his command when the United States entered the war on December 7, 1941, was enroute to Midway with a task force built around the aircraft carrier Lexington. Upon receipt of news of the attack upon Pearl Harbor, the task force began a high speed offensive sweep to the southeastward in the Oahu-Johnston-Palmyra triangle in an effort to intercept the enemy.

In May, 1944 he was assigned duty with the US Naval Forces, Europe, and served at Supreme Headquarters Allied Expeditionary Forces prior to and during the invasion of Normandy. Again returning to the Navy Department, he reported in September, 1944 and served one year as Deputy Chief of Staff to the Commander in Chief, US Fleet. On October 10, 1945 he was designated Deputy Chief of Naval Operations (Admiration and Service). He was awarded the Legion of Merit for his war services, the citation stating in part:

On March 1, 1946 he assumed duty as Commander, Tenth Fleet, Atlantic Fleet, for operations in the Caribbean and South Atlantic. Upon dissolution of the Tenth Fleet the following June, he became Commander US Naval Forces in the Mediterranean, a task force, USS Fargo, flagship. On February 9, 1948 he was ordered relieved of that command and to report to the Office of the Chief of Naval Operations, Navy Department, to await orders. He was assigned in March as Commandant, Eleventh Naval District, San Diego, California, with additional duty as Commander, Naval Base, there.

On December 31, 1948 he was ordered to duty as Representative of the Chief of Naval Operations on the Military Staff Committee of the United Nations Security Council, Washington, DC, reporting on March 1, 1949. In April, 1951 he was ordered detached from that duty, and later reported to the Office of the Chief of Naval Operations pending his relief from active duty and transfer to the Retired List of the Navy on June 1, 1951.

In addition to the Legion of Merit, Vice Admiral Bieri has the Mexican Service Medal (USS Virginia); the Victory Medal, Grand Fleet Clasp (USS Texas); the American Defense Service Medal, Fleet Clasp (USS Chicago); the Asiatic-Pacific Campaign Medal; the European-African-Middle Eastern Campaign Medal; the American Campaign Medal; and World War II Victory Medal. He was made Honorary Commander, Order of the British Empire by the Government of Great Britain. In 1946 he was decorated by the Government of Greece with the Grand Order of Phoenix with Crossed Swords; and in 1947 he was awarded the Legion of Honor by the French Government. He also has the Medal and Certificate in Commemoration of First Centennial of Peruvian Independence, presented by Peru.