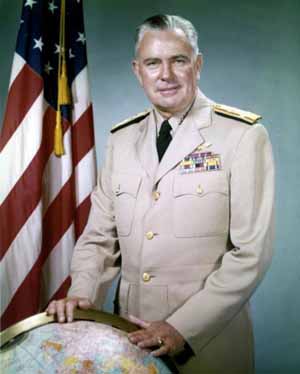 George Whelan Anderson, Jr., was born on 15 December 1906, in Brooklyn, New York, son of George W. and Clara (Green) Anderson. He attended Brooklyn Preparatory School, and entered the US Naval Academy, Annapolis, Maryland, from his native state in 1923. Graduated and commissioned Ensign on 2 June 1927, he subsequently advanced in rank to that of Rear Admiral, to date from 1 August 1954. He served in the rank of Vice Admiral, from 1 May 1957, until 18 January 1958, and on 14 September 1959 he again assumed the rank of Vice Admiral. He took the oath of office as Chief of Naval Operations, with the accompanying rank of Admiral, on 1 August 1961.

Following graduation from the Naval Academy in 1927, he remained there for the short course in aviation, before joining the USS Chaumont, for transportation to the USS Cincinnati, in which he served as a junior officer until 1930. He was then ordered to the Naval Air Station, Pensacola, Florida, for flight training and, designated Naval Aviator in October of that year, was ordered to the Atlantic Fleet for duty in the aviation units of the USS Concord and USS Raleigh, successively.

Between 1933 and 1935 he was assigned to the Flight Test Division of the Naval Air Station, NOB Norfolk, Virginia, after which he had duty afloat with Fighting Squadron TWO, based on the USS Lexington. He was detached from that squadron with orders to the Newport News (Virginia) Shipbuilding and Drydock Company, where the USS Yorktown was building, and joined that aircraft carrier on her commissioning on 30 September 1937. From the fall of 1939 until early 1940 he was attached to Patrol Squadron 44, Patrol Wing FOUR, based at Seattle, Washington.

He was next assigned to the Plans Division, Bureau of Aeronautics, Navy Department, Washington, DC, and while there participated in the formulation of the American aircraft program for World War II. This included association with war-time agencies charged with production and allocation of all United States aircraft and planning the aircraft aspects of the expansion of Naval aviation. For this liaison work with the Army Air Force while in that assignment he received a Letter of Commendation from the War Department, with authorization to wear the Army Commendation Ribbon.

In March 1943 he again reported to the Newport News Shipbuilding and Drydock Company, this time to assist in the fitting out the new USS Yorktown (CV-10), and became Navigator and Tactical Officer when she was commissioned on 15 April 1943. He was aboard that aircraft carrier during her early action in the Pacific and received a Letter of Commendation, with authority to wear the Commendation Ribbon, from the Commander in Chief, US Pacific Fleet, for outstanding services from 15 August to 1 November 1943, while attached to the USS Yorktown.

He is also entitled to the Ribbon for, and a facsimile of the Presidential Unit Citation awarded the USS Yorktown for "extraordinary heroism in action against enemy Japanese forces in the air, at sea and on shore in the Pacific War Area from August 31, 1943 to August 15, 1945...Daring and dependable in combat, the Yorktown with her gallant officers and men rendered loyal service in achieving the ultimate defeat of the Japanese Empire."

"In this capacity it was his grave responsibility to prepare plans for the motivation and employment of Air Force, Pacific Fleet aircraft units and ships, and to supervise the preparation of plans for the establishment and initial logistic support of advanced air bases. The ultimate success may be attributed, in large measure, to the highly efficient manner in which he contributed to the compiling and evaluating of the mass of details upon which these plans were based, and to his sound judgment in estimating future requirements and availability of Pacific Fleet aviation units..."

On 28 March 1944 he reported as Assistant to the Deputy Commander in Chief, US Pacific Fleet and Pacific Ocean Areas. He was awarded the Bronze Star Medal for "meritorious achievement (in that capacity)...during operations against enemy Japanese forces in the Pacific War Area, from March 28, 1944 to April 16, 1945..." The citation further states: "Intelligently planning and estimating for the needs of Naval aviation in the Pacific, (he) contributed materially to the improvement in organization, training and logistical support..."

In June 1945 he became Aviation Officer in the Strategic Plans Section on the Staff of the Commander in Chief, US Fleet, with headquarters at the Navy Department, Washington, DC. As such he also had duty as Deputy Navy Planner on the Joint Planning Staff. Ordered to the Office of the Chief of Naval Operations, Navy Department, he was appointed a member of the Permanent Joint Board of Defense (Canada - United States) in November 1946; was also one of the Navy members of the Brazilian - United States Defense Board and served with the Joint War Plans Committee of the Joint Staff.

In July 1948 he returned to sea as the Commanding Officer of the USS Mindoro, and when detached from that anti-submarine carrier in August 1949, reported for instruction at the National War College, Washington, DC. Completing the course there in July 1950 he joined the Staff of the Commander SIXTH Fleet as Fleet Operations Officer. In December 1950 he transferred to the Staff of the Supreme Allied Commander in Europe (SHAPE), and remained there until July 1952 as the Senior US Officer in Plans and Operations. He served as Commanding Officer of the USS Franklin D. Roosevelt for a year, and when detached from command of that aircraft carrier in June 1953, reported for duty in the Office of the Chief of Naval Operations, Navy Department.

In July 1953 he became Special Assistant to the Chairman of the Joint Chiefs of Staff, Washington, DC, continuing to serve in that capacity until July 1955. On 3 August, that year, he assumed command of the Formosa Patrol Force with addition duty as Commander US Fleet Air Wing ONE (his title was changed late in 1955 to Commander US Taiwan Patrol Force). He was Chief of Staff, Joint Staff, Commander in Chief, Pacific, from July 1956 until May 1957 when he reported in the rank of Vice Admiral as Chief of Staff and Aide to the Commander in Chief, Pacific.

"A dynamic leader and skilled diplomat, Admiral (then Vice Admiral Anderson) developed and maintained an exceptionally high standard of morale and combat readiness within SIXTH Fleet, and succeeded in elevating his command to a new level of prestige and effectiveness as an instrument for the conduct of foreign affairs of his country. Keenly aware that the mission of goodwill was second only to that of readiness, he has been an outstanding exponent of the President-s People to People Program and has indoctrinated personnel of his command in its objectives so successfully that the ships and personnel of the SIXTH Fleet have been welcome visitors at each port of call. Through his exceptional diplomatic and political talents, Admiral Anderson has made a major contribution toward encouraging and strengthening the ties of friendship between the United States and the littoral Mediterranean nations, and toward supporting these nations in their resolve to resist Communism and Communist infiltration. In bolstering the morale and combat readiness of the SIXTH Fleet, he has been instrumental in enhancing the military posture and prestige of the United States..."

His appointment to be Chief of Naval Operations for a term of two years, with the accompanying rank of Admiral, was approved by the Senate on 29 June 1961 and he was sworn into office at the Naval Academy, Annapolis, Maryland on 1 August 1961. He served in that capacity until relieved of all active duty pending his retirement, effective 1 August 1963. "For exceptionally meritorious service...while serving as Chief of Naval Operations, principal Naval advisor to the President, and member of the Joint Chiefs of Staff, from August 1961 to August 1963..." he was awarded a Gold Star in lieu of the Second Distinguished Service Medal. The citation continues in part:

"Admiral Anderson has displayed superb qualities of leadership and professional competence in one of the most responsible positions in the Department of Defense. Under his skillful and effective guidance, the operating forces of the Navy have contributed significantly to our national posture and have carried out their world-wide responsibilities with a view toward enhancing the prestige of the United States and its objective of world peace. Admiral Anderson's consummate knowledge and understanding of the complexities of international relations, his recognition of the requirements generated by swiftly paced, changing world situations, and his dedication to high military standards have been applied effectively toward keeping the Navy strong and maintaining the United States in a pre-eminent position among the maritime powers of the world..."

On 21 May 1963, President John F. Kennedy announced his intention to appoint Admiral Anderson as United States Ambassador to Portugal. The appointment was approved by the Senate on 31 July, and he was sworn in as Ambassador by Secretary of State Rusk on 4 September 1963.

He was married to the former Mary Lee Lamar Sample of Pensacola, Florida, and had two sons, a daughter, and step-daughter. Admiral Anderson died 20 March 1992 in the Arleigh Burke Pavilion nursing home in McLean, Virginia.