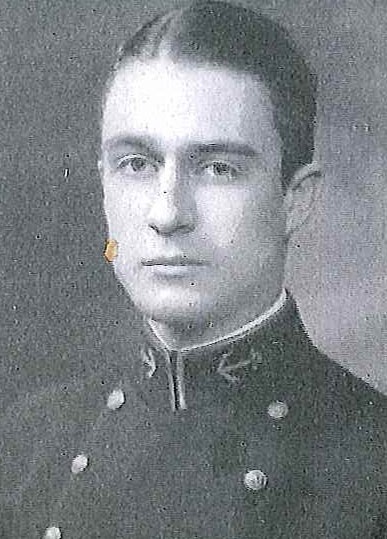 Edward Seabury Carmick was born on March 24, 1908, in Washington DC, son of Louis G. and Elizabeth Crosby (Silkman) Carmick. He attended Western High School in the District of Columbia, before enlisting in the US Navy on June 25, 1925. He served in an enlisted capacity until July 13, 1926, when he was honorably discharged to accept an appointment to the U. S. Naval Academy, Annapolis, Maryland.

As a Midshipman he participated in varsity boxing; class cross country running; class soccer, track (two mile run); was a photographer for the “Lucky Bag”; and Platoon Commander his final year. Graduated and commissioned Ensign on June 5, 1930, he subsequently advanced, attaining the rank of Captain, to date from February 1, 1949, having served in that rank (temporary) from January 19, 1946 to January 1, 1948.

Following graduation from the Naval Academy in 1930 he had two months’ preliminary flight training at the Naval Air Station, Hampton Roads, Virginia, after which he was assigned to the USS California, operating with the Battle Force. While attached to that battleship he attended the Torpedo School, San Diego, California, from September 1930 to January 1931, returning to duty in the California, upon completion of the course. Between March 1932 and July 1934 he served successively in USS Claxton, USS Greer, and USS Hulbert, all operating with the Scouting Force.

Competing instruction at the Submarine School, New London, Connecticut, in December 1934, he then joined USS S-12, as Engineering and Executive Officer. He continued duty in that submarine until October 1936, when he transferred to USS Vega. Returning to the United States, he reported, in July 1937, for instruction in naval engineering (design) at the Postgraduate School, Annapolis, Maryland. From June 1939 to June 1940 he continued the course at the Massachusetts Institute of Technology at Cambridge, where he received the degree of Master of Science in marine engineering.

In June 1940 he reported for fitting out duty in USS Tautog at the Electric Boat Company, Groton, Connecticut, and upon the commissioning of that submarine on July 3, 1940, he joined her as Executive Officer and Navigator. He was so serving when the United States entered World War II, December 8, 1941, and for outstanding services while aboard her was awarded the Silver Star Medal and a Letter of Commendation with authorization to wear the Commendation Ribbon from the Commander in Chief, US Pacific Fleet, and is entitled to the Ribbon for, and a facsimile of the Navy Unit Commendation awarded the Tautog. The citations follow in part:

Silver Star Medal: “For conspicuous gallantry and intrepidity . . . during the Second War Patrol of (the Tautog) . . . in the Truk and Marshall Islands Area, from April 24 to June 11, 1942. Despite severe enemy countermeasures and unfavorable weather conditions, (he) rendered invaluable assistance to his commanding officer in conducting attacks which resulted in the sinking of hostile ships . . .”

Letter of Commendation: “For his dependability and alertness as Watch and Diving Officer, for his capable navigation and for the valuable assistance rendered the Commanding Officer during pursuit of enemy vessels and as Assistant Approach Officer during attacks.”

Navy Unit Commendation: “For outstanding heroism in action against Japanese combatant and merchant shipping . . . in enemy-controlled waters of the Pacific. . . A stouthearted fighter, handled superably by her skilled and gallant officers and men, she has carried the offensive to the enemy with indomitable aggressiveness since the first difficult and dangerous months of the war when Japanese strength was at its height. . . Although repeatedly depth-charged and pursued for long periods, the Tautog has achieved an illustrious combat record attesting the valor and superb seamanship of her ship’s company. . .”

Detached from the Tautog in September 1942, after participating in the first three war patrols, he had brief pre-commissioning duty as Prospective Commanding Officer of Submarine Squadron Six, but was ordered the next month, before that squadron was commissioned, as Commanding Officer of USS Sargo, commanding her through three war patrols in the Eastern New Guinea, Truk and Marianas Area. “For meritorious service as Commanding Officer of USS Sargo during the Seventh War Patrol of that vessels in enemy Japanese-controlled waters from May 27, to July 9, 1943. . .” he was awarded the Bronze Star Medal with Combat “V”. The citation further states in part:

“Penetrating a strong enemy escort screen, (he) launched well planned torpedo attacks to sink an enemy freighter of over 6,000 tons and to damage two others totaling over 12,000 tons. Employing effective evasive tactics, during enemy countermeasures, he succeeded in returning his ship safe to port . . .”

From November 1943 to December 1944 he commanded the Submarine Repair Unit at Fremantle, Australia, and while in that assignment he was in charge of overhauling United States’ submarines and also provided some support to the Dutch fleet and other allied craft operating under the Commander Allied Forces, Western Australia. He was awarded the Legion of Merit with Combat “V”, and the Order of the Orange Nassau, from the Government of the Netherlands. The citation accompanying the Legion of Merit follows in part:

“For exceptionally meritorious conduct . . . as Commanding Officer, Submarine Repair Unit, Navy 137, . . . from October 1943, to December 1944. As a result of (his) untiring efforts the Submarine Repair Unit was developed into a well-equipped base and using a high standard of workmanship, he directed the refitting of six Dutch, one English and forty-five United States submarines. In addition, he was responsible for the establishment of the recognition, night lookout and sound schools and the adequate repair facilities in the radar and sound shops, as well as the excellent operation of torpedoes carried on patrol by submarines of the force. . .”

In January 1945 he became Repair Officer of the Submarine Base, Pearl Harbor, Territory of Hawaii, and as such was employed in overhauling and modifying submarines under Commander Submarines, US Pacific Fleet, during the latter part of the war. In March 1946 he returned to the United States for duty as Shop Superintendent at the Long Beach (California) Naval Shipyard, and continued to serve in that capacity until May 1949. Following an assignment as Officer in Charge of Ships on the staff of Commander Service Force, US Pacific Fleet, he reported, in August 1950, as Maintenance Officer on the staff of Commander Service Squadron Three. For outstanding service in that capacity during the Korean conflict he was awarded a Gold Star in lieu of the Second Bronze Star Medal and received a Letter of Commendation, with authorization to wear the Bronze Star on his Commendation Ribbon, from the Commander Seventh Fleet. The citations follow in part:

Gold Star in lieu of the Second Bronze Star Medal: “For meritorious achievement as Ordnance Officer on the staff of Commander Service Squadron 3 from August 1, 1950 to February 28, 1951 in support of United States Naval vessels operating against the enemy in the Korean Theater. Displaying great knowledge of the capabilities and limitations of ammunition storage and supply in the Western Pacific, as well as untiring care and sound judgment in planning, he was instrumental in formulating plans for the replenishment of fire support vessels on station and carriers at sea. . . .”

Letter of Commendation: “For exceptionally meritorious service . . . as Maintenance Officer on the staff of Commander Service Squadron Three during the period March 1, 1951 to January 8, 1952. . .”

Returning to duty ashore in February 1952, he reported as Maintenance and Repair Officer on the staff of Commander Military Sea Transportation Service, Pacific Area and Navy Control of Shipping Officer, with headquarters in San Francisco, California.

In addition to the Silver Star Medal, the Legion of Merit with Combat “V”, the Bronze Star Medal with Gold Star and Combat “V”, the Commendation Ribbon with Bronze Star; the Navy Unit Commendation Ribbon, and the Order of the Orange-Nassau (grade of Officer) from the Netherlands Government, Captain Carmick has the American Defense Service Medal, Fleet Clasp; the American Campaign Medal; the Asiatic-Pacific Campaign Medal with one silver star and one bronze star (six engagements); the World War II Victory Medal; the Korean Service Medal; and the United Nations Service Medal.