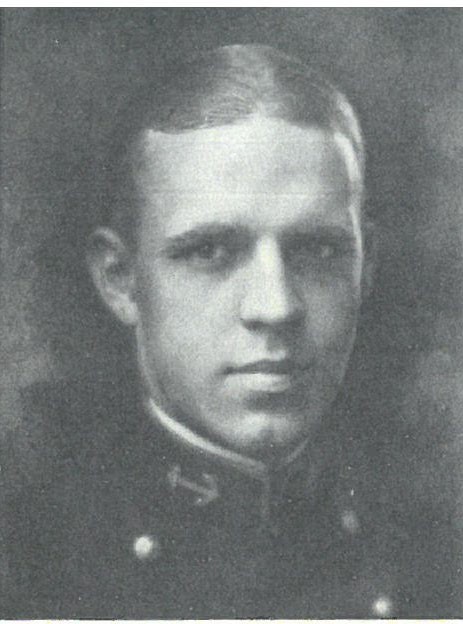 Captain Calvert was born on September 15, 1901, at Battle Creek, Michigan. He was graduated from the Battle Creek High School in 1919 and attended Carnegie Institute of Technology at Pittsburgh, Pennsylvania, for a year before entering the United States Naval Academy, Annapolis, Maryland, from Michigan on September 18, 1920. While a Midshipman he served on the staff of The Log and The Lucky Bag. Graduated and commissioned Ensign on June 4, 1924, he subsequently progressed in grade until his promotion to Captain to rank from June 1, 1943.

Following graduation from the Naval Academy in June, 1924, Captain Calvert had six years' duty at sea, serving first as radio officer of USS Pennsylvania, flagship of Division 3, Battleship Divisions, Battle Fleet, until January, 1926, and as assistant engineer officer and later engineer officer of USS Thompson, operating with Division 32, Squaqron 11, Destroyer Squadrons, Battle Fleet, during the period January, 1926 to May, 1930. He then returned to to the United States for instruction in mechanical engineering at the Postgraduate School, Annapolis, Maryland, continuing the course at Columbia University, New York, NY, where he received the degree of Master of Science in June, 1932.

From June, 1932 until June, 1936, Captain Calvert had sea duty, serving con.secutively as engineer officer of USS Dent (DD116), a unit of Destroyers, Battle Force; as assistant squadron engineer of Destroyer Squadron 2, Battle Force, USS Decatur, flagship; and as broadside battery officer of the USS Pennsylvania, flagship of Commander·in Chief, US Fleet. He reported in June, 1936, to the Naval Engineering Experiment Station at Annapolis, Maryland, where he served as Superintendent of the Metals and Welding Laboratories until the summer of 1939.

Captain Calvert served from June, 1939 until October, 1941, in USS Detroit, having duty first as first lieutenant and damage control officer aad later as navigator. In October, 1941 he assumed command of USS Craven (DD 382)and was serving in that command when the Japanese attacked Pearl Harbor on December 1, 1941. From December, 1942 until November, 1943, he was in command of Motor Torpedo Bots, Solomons Area , South Pacific. For meritorious service in that assignment during the period December 15, 1942 until February, 1943, he was awarded the Distinguished Service Medal by the War Department. The citation follows :

"For exceptionally meritorious service to the Government in a duty of great responsibility from  December 15, 1942, to February 9, 1943, at Guadalcanal, Commander Calvert commanded the motor torpedo boat flotilla which, in aid of Army forces on Guadalcanal, maintained a nightly patrol of enemy coastal waters during offensive land operations. On four separate occasions the flotilla under his command intercepted enemy forces and succeeded in destroying two enemy destroyers and damaging one enemy cruiser and eight destroyers, thereby seriously handicapping enemy efforts to re-enforce, and later to evacuate, forces on that island. The flotilla also rendered invaluable service in supporting the transport of Army ground forces and in assisting in the maintenance of those forces, the entire operation being achieved without loss or damage at sea. His fearlessness and  professional ability were an inspiration to his officers and men, and contributed largely to the successful operations against the enemy forces at Guadalcanal."

Captain Calvert returned to the United States in December, 1943, and served until June, 1945, in the Division of Construction and Maintenance of Patrol and District Craft of the Bureau of Ships, Navy Department. From June, 1945, until May, 1946, he was in command of USS Oakland, and following temporary duty in the Bureau of Naval Personnel he reported in September, 1946, to the Naval War College for instruction. Detached in June, 1947, he is now under orders to report in August as Deputy Chief, Joint Strategic Plans and Operations Group, on the staff of General of the Army Douglas MacArthur, in Tokyo, Japan.

Captain Calvert is a member of the Delta Upsilon Fraternity and the American Society of Naval Engineers.