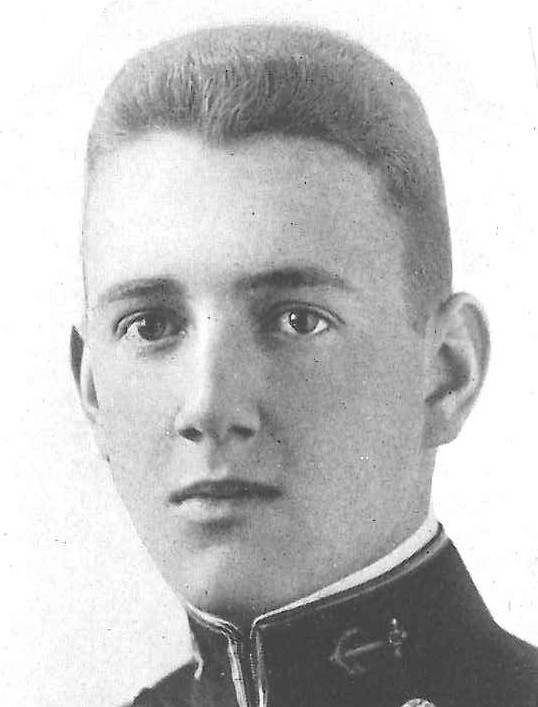 Victor Cameron Barringer, Jr., was born in Monroe, Louisiana on March 18, 1897, son of Victor C. and Mrs. Georgia Tucker Stubbs Barringer.  He attended Ouachito Parish High School, in Monroe, before his appointment to the US Naval Academy, Annapolis, Maryland in 1914 from the state of Louisiana.  While a Midshipman he played class lacrosse and was a member of the choir.  Graduated and commissioned Ensign in June 1917, with the Class of 1918, he subsequently attained the rank of Captain, June 20, 1942.  He was transferred to the Retired List of the Navy on June 30, 1950, and advanced to the rank of Rear Admiral on the basis of combat citations.

After graduation from the Naval Academy he joined the USS Kansas, and later served in the destroyer Conyngham, which operated with the Destroyer Force based on Queenstown, Ireland, during World War I.  Upon conclusion of the war, he was assigned duty in the USS Sacramento which was destined for China Station, but was diverted to Archangel, Russia, and the White Sea.  He participated in the Archangel Expedition, and the following year was assigned duty as Executive Officer of the USS Henshaw, operating on patrol duty in the Caribbean and Alaskan area, later joining Destroyer Squadrons in the Pacific.

From 1923 until 1925 he had duty at the Naval Academy, Annapolis, Maryland.  He served consecutively as Turret Officer, Electrical Officer and Senior Assistant Engineer in the USS California during the period 1925-28.  Following a second two-year tour of duty at the Naval Academy he had duty as Executive Officer of the USS Sacramento, operating with the Special Service Squadron in 1930-32.  During the first of this period of service he was Aide and Flag Lieutenant to Commander, Battleship Division 2.  While later serving as Executive Officer and later as Navigator of the Sacramento, that vessel operated with the Special Service Squadron, participated in the rescue of three castaways on Cocos Island, the salvage of the SS HEILO at Corinto, Nicaragua, clearing the channel to that port, the relief and rescue at Belize, British Honduras after the hurricane, and later had patrol duty in Central American Waters.  He received a citation from the British Ambassador for services at Belize, and a Letter of Commendation from the Secretary of the Navy for salvage of SS HEILO.

In 1932-33 he had duty as Engineer Officer of the USS Rochester, operating with the Special Service Squadron and later with the Asiatic Fleet.  The following two years, he served as Aide to the Commandant, Navy Yard, Washington, DC, and from 1935 until 1938, he had sea duty as first Gunnery Officer and the last year as Navigator of the USS Arizona.  From May 1940 until February 1941 he was Commander Destroyer Division 83, operating on the neutrality patrol and also in charge East Coast Sound School.

In February 1941 he reported for duty as Executive Officer if the USS Helena, and commanded the USS Titania (AKA-13) from May 1942 until April 1943 during the early period of World War II.  For his services in that command during the assault on and occupation of French Morocco from November 8 to 11, 1942, he was awarded the Bronze Star Medal with Combat “V”.

On May 10, 1943, he reported for duty as Officer in Charge of the Amphibious Warfare Section of the Fleet Maintenance Division, Office of the Chief of Naval Operations, Navy Department, Washington, DC, and for exceptionally meritorious conduct in that assignment to the cessation of hostilities in August 1945, he received the Legion of Merit.  The citation continues in part: “….Highly qualified by his technical knowledge and previous combat experience to direct a Naval operation of vital importance, (he) was responsible for the readying for service of all types of craft used in amphibious warfare and for the speedy delivery of amphibious craft constructed in the United States to forward combat areas.  By his aggressive leadership, resourcefulness in solving difficult material problems and untiring devotion to duty (he) contributed materially to the successful prosecution of the war.”

During Rear Admiral Barringer’s tour of duty in the Office of the Chief of Naval Operations, he had periods of temporary additional duty including that of Observer of Amphibious Exercises, Atlantic Fleet, in Guantanamo Bay, Cuba; and as Executive Member of the Ship Characteristics Board, at the Special Devices Center, Officer of the Naval Research, Sand Point, Long Island, New York, in 1948.  On April 28, 1950 he was detached from that assignment and relieved of all active duty pending his retirement on June 30, 1950.