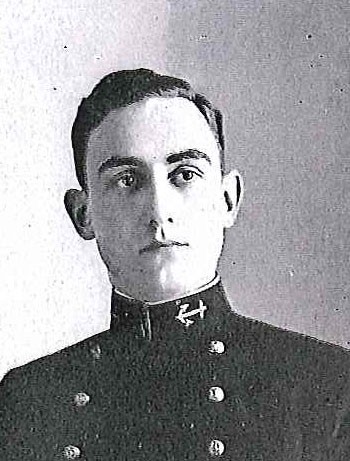 Walter Stanley DeLany was born in Reading, Pennsylvania, on January 21, 1891, son of Irvin F. and Mary E. (Dunkle) DeLany. He attended Reading High School before his appointment to the US Naval Academy from his native state in 1908. While a Midshipman, he was cheer leader and a member of the class basketball and lacrosse teams. Graduated and commissioned Ensign on June 7, 1912, he was promoted to Lieutenant (jg), June 8, 1915; received temporary promotions to the ranks of Lieutenant and Lieutenant Commander during World War I, and was commissioned in those ranks in 1918 and 1922 respectively; and subsequently attained the rank of Rear Admiral, to date from May 16, 1942. He served in the temporary rank of Vice Admiral from January 26, 1946, until July 1, 1948, and again from May 1952, retiring in that rank on February 1, 1953.

After graduation from the Naval Academy in 1912, he joined USS Minnesota and served in her until May 1915. Following torpedo instruction in USS Montana, he reported to the Fore River Shipbuilding Company, Quincy, Massachusetts, for duty in connection with fitting out USS Nevada. He served in that battleship from her commissioning, March 11, 1916 until May 1917, when he was transferred to destroyer Wilkes, based in Queenstown, Ireland, during World War I. Returning to the United States in August 1918, he served as Executive Officer of destroyer Craven from her commissioning, October 19, 1918, until June of the following year, after which he commanded USS Paulding for a brief period.

He was in charge of the Navy Recruiting Station, Albany, New York, from July 1919 until November 1921, when he joined the newly commissioned transport Argonne, as Navigator and First Lieutenant. In June 1923, he was ordered as Executive Officer of destroyer Lamson, and from January to October 1924 served as Squadron Gunnery Officer of Destroyer Squadron NINE, Scouting Fleet. He had duty in the Training Division of the Bureau of Navigation, Navy Department, Washington, DC, from October 1924 until January 1927, and for three years thereafter served as First Lieutenant of USS Oklahoma.

He returned to the Navy Department in February 1930 and served three years in Ships’ Movements Division, Office of the Chief of Naval Operations. In July 1933 he joined USS New York as Navigator. Two years later he was ordered to the Naval Academy, Annapolis, Maryland, for duty in the Executive Department. On July 15, 1938, he assumed command of Destroyer Division SEVEN of Destroyers, Battle Force, USS Mugford, flagship. In May 1939 he became Chief of Staff and Aide to Commander Cruisers, Battle Force, USS Honolulu, flagship.

On February 1, 1941 he was designated Assistant Chief of Staff and Operations Officer on the Staff of the Commander in Chief, Pacific Fleet. For “exceptionally meritorious service” in that assignment until June 23, 1942, he was awarded the Legion of Merit. The citation states: “During this vitally important period he displayed the highest qualities of judgment and initiative, thereby contributing materially to the prosecution of the war against Japan…”

On June 24, 1942 he assumed command of the cruiser New Orleans, then operating in the Pacific, and participated in the Guadalcanal Campaign. He was detached to report on November 12, 1942, as Assistant Chief of Staff (Operations), to Commander in Chief, US Fleet, as Headquarters, Washington, DC. On March 19, 1943, he was redesignated Assistant Chief of Staff (Readiness) and was awarded a Second Legion of Merit for “exceptionally meritorious service…(in that capacity) from November 1942 to August 1945…” The citation continues: “During this long period, by the exercise of great foresight, broad vision, unusual initiative, sound judge, superior professional knowledge and high executive ability, he directed the improvement and development of means, methods, and practices which kept the United States Fleet in a continually higher state of readiness for battle than those of the enemies and contributed in a great degree to the successful prosecution of the war.”

In that assignment, he was the Navy representative on the Joint Committee on New Weapons and Equipment (JNW). After the reorganization in October 1945, he continued as Head of the Operational Readiness Section of the Office of the Chief of Naval Operations and headed the postwar Training Policy Board. On January 26, 1946, he was given the temporary rank of Vice Admiral as Commander Battleship-Cruisers, Pacific Fleet, with USS St. Paul as flagship. He continued in that command until June 1948.

Ordered to the Third Naval District, New York, New York, he served as Commandant of that District (reverting to his permanent rank of Rear Admiral upon assuming command on July 1, 1948) until May 1952. He was then designated Commander Eastern Sea Frontier, with additional duty as Commander Atlantic Reserve Fleet, with the accompanying rank of Vice Admiral, and served as such until relieved of all active duty pending his transfer to the Retired List of the Navy on February 1, 1953.

Upon his retirement, the City of New York, at a civic ceremony, awarded him its gold medal for “Distinguished and Outstanding Public Service.” Subsequent to his retirement, President Eisenhower’s appointment as Deputy Administrator of the Mutual Defense Assistance Control Act was confirmed by the Senate in May 1953. He served continuously under that appointment until March 1961. Since that time he has been associated with the Naval Historical Society, serving as President since 1967; as a member of the board of Managers of the Navy Relief Society, and Chairman of the Finance Committee of that Society.