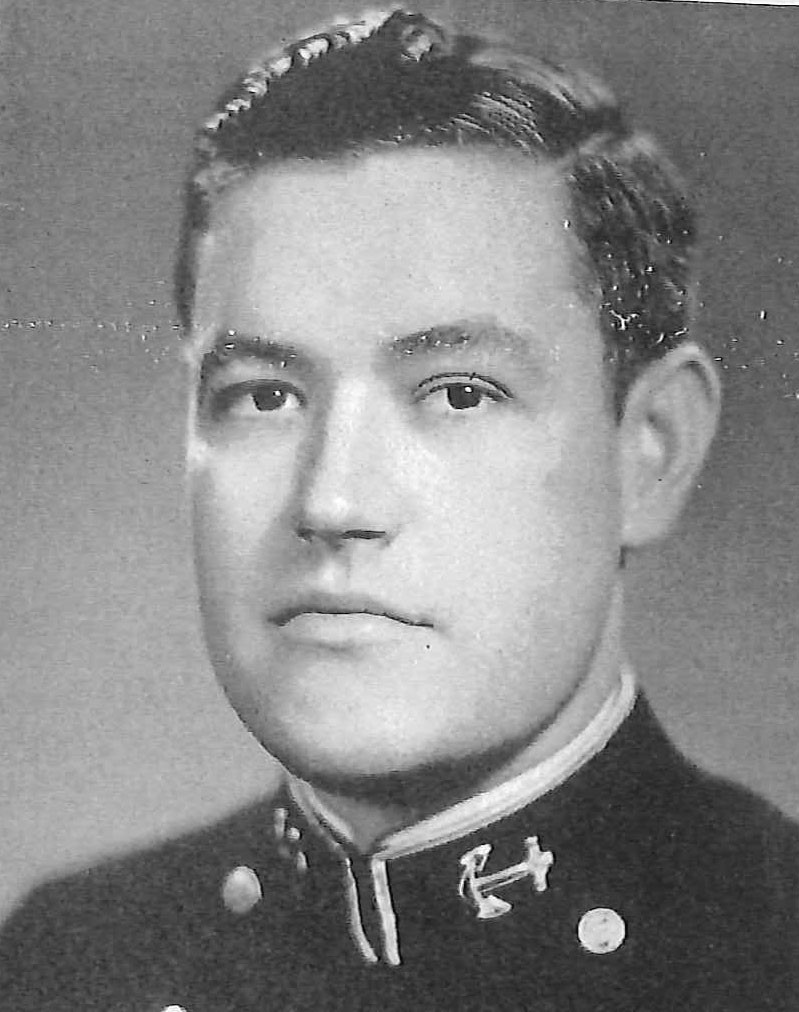 Ralph Stewart Chandler was born in Attalla, Alabama, on August 25, 1917, son of J.J. and Ada B. (Dunaway) Chandler. He attended the University of Chattanooga, at Chattanooga, Tennessee, prior to entering the US Naval Academy, Annapolis, Maryland, on appointment from Tennessee, on June 13, 1937. He was graduated with the Class of 1941 on February 7 of that year (course accelerated due to National Emergency), and commissioned Ensign from that date. By subsequent advancement, he attained the rank of Commander, to date from February 7, 1951.

After graduated from the Naval Academy in February 1941, he joined USS Detroit, and was serving as Assistant Navigator and Division Officer of that cruiser, berthed at Pearl Harbor during the Japanese attack on the Fleet there on December 7, 1941. He remained on board the Detroit while she assisted in the search for Japanese planes during the three days following, and after her return to the West Coast of the United States. Detached in February 1943, he had flight training at the Naval Air Station, Pensacola, Florida, where he was designated Naval Aviator in 1944.

From August 1944 until December 1945 he served as Executive Officer of Patrol Bombing Squadron 53. “For meritorious achievement in aerial flight as Pilot of a Plane in Patrol Bombing Squadron Fifty Three during operations against enemy Japanese forces in the Pacific War Area…” he was awarded the Air Medal and a Gold Star in lieu of the Second Air Medal. The first was for the period April 18 to May 7, 1945, the second for the period May 8 to 21, 1945, and during each period he participated in five combat missions and contributed materially to the success of his squadron in carrying out air-sea rescue missions during bombing and strafing attacks against enemy installations in the Bismarck Archipelago and Solomon Islands Area.

After the war he served as Engineering Officer of Headquarters Squadron 14-1, December 1945 to June 1946, and during the three years to follow he attended the Naval Postgraduate School, Annapolis, and California Institute of Technology, Pasadena, California, receiving a Master’s degree in Aeronautical Engineering in June 1949. For fourteen months he served as Launching Division Officer of the Naval Air Missile Test Center, Point Mugu, California, and in August 1950 was transferred to duty as Maintenance Officer of Composite Squadron 7, serving in that capacity for six months.

He served as Maintenance Officer of Heavy Attack Wing One from February to December 1951, after which, until June 1952, he was Maintenance Officer and Operating Officer of Composite Squadron 8. He next reported to the Naval Proving Ground, Dahlgren, Virginia, and after a tour of duty as Officer in Charge, Naval Air Facility, he was ordered to the Bureau of Aeronautics, Navy Department, Washington, D.C., reporting in August 1954. He served there for three years, and during that time, in February 1955, was designated Aeronautical Engineering Duty Officer.

In August 1957 he reported to Commander Heavy Attack Wing One, for duty on the Staff, and under orders of October 22, 1958, he will be detached to report in December 1958 as Bureau of Aeronautics Representative, North American Aviation, Inc., Columbus Division, Columbus, Ohio.