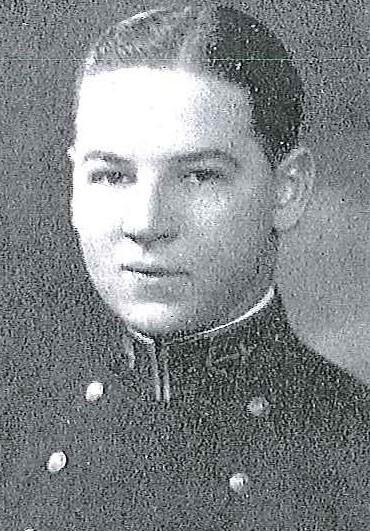 John Francis Flynn was born in Berkeley, Virginia, on December 24, 1906, son of John Francis Flynn and Mrs.  Laura Mary (Ahearn) Flynn, both now deceased. He attended Portsmouth, New Hampshire, High School and Boston English High School, Boston, Massachusetts, and on June 15, 1926, entered the U. S. Naval Academy, Annapolis, Maryland. As a Midshipman he participated in water polo, Class basketball, and 150-pound crew; and was a member of the Glee Club and Musical Clubs. He was commissioned Ensign on June 5, 1930, and subsequently advanced to the  rank of Captain, to date from July 1, 1949, having served in that rank (temporary) from December 1945 until December 1947.

Upon graduation in 1930, he was assigned to the USS Marblehead, in which he served for three years as Turret Officer Assistant Navigator, and as a junior officer in the “B” and “M” Divisions, and in Gunnery. From June 1933 to June 1936 he served successively as Torpedo Officer – First Division, in the destroyers Waters and Crowninshield, and for a year thereafter was Communication Officer of USS Altair.

Reporting in June 1937 to the Naval Shipyard, Philadelphia, Pennsylvania, he had duty until September 1938 with the Ship Superintendent, New Construction (Destroyers). During the next two months he had instruction at the Chemical Warfare School, Edgewood, Maryland, and the Naval Gun Factory, Washington, D. C. In November 1938 he reported to the Bath Iron Works, Bath, Maine, to assist in fitting out USS Jouett (DD 396), and from January 1939 to October 1941 served as her Gunnery Officer. In November he joined USS Ellyson as Executive Officer, and was on board that destroyer when the United States entered World War II.

Detached from the Ellyson in August 1942, he assumed command of USS Barry a month later. Under his command the Barry, as a part of Task Unit 21.14, participated in anti-submarine operations in the Mid-Atlantic area, and was awarded the Presidential Unit Citation, “For outstanding performance during anti-submarine operations in mid-Atlantic from July 27, 1943. . .” The citation states that “the Barry, her embarked aircraft and her escorts pressed home a vigorous offensive which was largely responsible for the complete withdrawal of hostile U-boats from this vital supply area . . . and wrested the initiative from the enemy before actual inception of projected large scale attacks. . .”

Detached from the Barry in November 1943, he assumed command in December, of USS Parker, and remained in that command until March 1945. He was awarded the Bronze Star Medal with Combat “V”, for “meritorious achievement as Commanding Officer of USS Parker, during advanced operations in support of the Allied Armies in Italy from May 15, to August 5, 1944. . .” The citation further states:

“Commencing with the Army’s breakthrough at the Anzio beachhead and continuing with the coastal advance northward, Commander Flynn operated his ship in support of the ground movement, carrying out effective shore bombardment of enemy installations and concentrations, operating against hostile submarine and E-boat attacks on vital maintenance shipping and shipping advance minesweeping formations . . .”

He was also awarded a Gold Star in lieu of the Second Bronze Star Medal, with the following citation: “For meritorious achievement as Commanding Officer of the USS Parker, operating as a unit of a Fire Support Group, during our Amphibious Invasion of Southern France in August 1944. . . (He) skillfully maneuvered the Parker through heavily mined waters and, despite intense hostile fire, carried out a vigorous gunfire attack against enemy installations and concentrations on shore. . .(and) contributed to the advance of our forces in this area. . .”

From April 1945 to January 1947 he served as Director of Distribution, at Headquarters, Seventh Naval District, and for a year thereafter was at sea as Commander Destroyer Division 152, with his pennant in USS Rupertus. In April 1948 he reported to the Naval Port Facility, Tsingtao, China, where he served as Executive Officer, and Commanding Officer during the “roll-up” period. He was designated Administrative Officer at the Naval Shipyard, Pearl Harbor, T. H., in April 1949, and remained there until July 1950, when he returned to the United States.

During the period August 1950 until April 1952, he served as Headquarters Eighth Naval District, as Assistant Chief of Staff for Personnel and Assistant Chief for Administration. In June 1952 he took command of USS Logan (APA 196), in the Far East, and as her Commanding Officer participated in action during the Second Korean Winter. Detached from command of the Logan in December 1953, he was ordered to duty as Chief of Staff to[CTSCUND(1]  the Chief of the Military Assistant Advisory Group, Athens, Greece, and served in that capacity from February until April 1954. In May of that year he reported as Inspector of Navy Recruiting and Induction, Joint and Naval Officer Procurement, Sixth Joint Service Induction Area, Omaha, Nebraska.