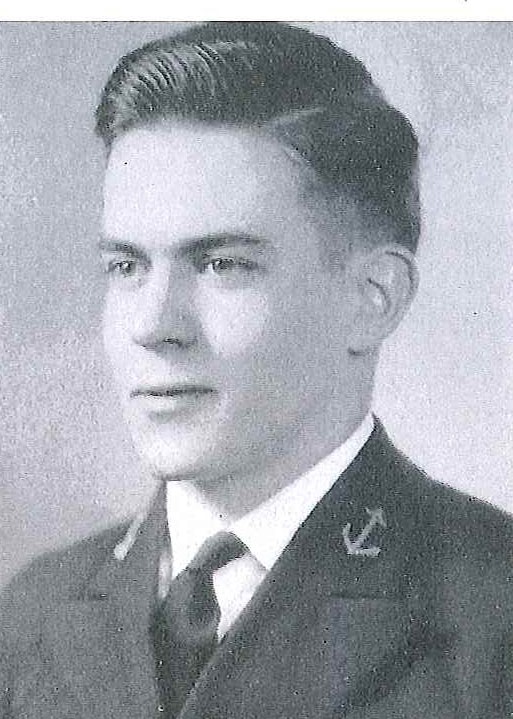 Leonard Emil Ewoldt was born in Paullina, Iowa, on November 19, 1913, son of Emil and Sarah (Hyndman) Ewoldt. He attended Hartley (Iowa) High School and the Marion (Alabama) Military Institute, prior to his appointment to the US Naval Academy, Annapolis, Maryland, from his native stat in 1933. As a Midshipman he participated in boxing and gymnastics. Graduated and commissioned Ensign on June 3, 1937, he subsequently advanced in rank to that of Captain, to date from July 1, 1955.

Following graduation from the Naval Academy in 1927, he had duty on board t USS Cincinnati until May 10938, after which he assisted in fitting out USS Boise. He joined that cruiser upon her commissioning, August 12, 1938, and was detached in March 1940 with orders to the Naval Air Station, Pensacola, Florida, for flight training. Designated Naval Aviator on December 23, 1940, he was assigned to Torpedo Squadron THREE. In April 1941 he joined Torpedo Squadron FIVE. He was serving with that squadron when the United States entered World War II, December 8, 1941, and subsequently participated in the attacks on the Marshall Island, Salamaua-Lae, Tulagi Harbor, culmination in the Battle of Coral Sea.

During the Tulagi Harbor attack, he was forced down near Guadalcanal. With his radioman, Captain Ewoldt inflated the life raft and after floating three days without food and little water, they finally landed at Guadalcanal, where they lived for several days, first with natives and later with missionaries. The British District Officer at San Cristobal appropriated a Chinese trading schooner, provided supplies and a crew of seven Chinese refugees and departed for Ifate in the New Hebrides. There, eleven days later, they were picked up by the destroyer Paul Jones and taken to Pearl Harbor. Incidentally he claims the dubious distinction of being the only pilot declared missing as a result of this engagement.

“For extraordinary heroism and courageous devotion to duty as pilot of an airplane of a Torpedo Squadron in offensive action against enemy Japanese forces at Tulagi Harbor on May 4, 1942…” he was awarded the Navy Cross. The citation continue:  “Lieutenant Ewoldt’s spirit of determination and persistence while participating in these attacks in the face of heavy anti-aircraft fire, contributed to sinking of serve damaging of at least eight enemy Japanese vessels…”

He was also awarded a Gold Star in lieu of the Third Air Medal with the following citation:  “For meritorious achievement…as Pilot of a Bomber Plane in Torpedo Squadron FIVE, attached to USS Yorktown, in action against enemy Japanese forces at Salamaua and Lae, New Guinea, on March 10, 1942. Undaunted by intense anti-aircraft fire and strong fighter opposition, (he) boldly carried out a high-level bombing attack to assist in damaging a hostile seaplane carrier and in destroying aircraft on board (thus)… contributing to the success of the mission..”

From August 1942 to January 1943 he was an Instructor in torpedo planes with the Advanced Carrier Training Group at the Naval Air Station, San Diego, California, after which he served as Torpedo Plane Training Officer at the Naval Air Station, Jacksonville, Florida. In January 1944 he joined USS Hancock as Assistant Air Officer, and from November of that year until February 1945 continued duty in that aircraft carrier as Squadron Commander of Torpedo Squadron SEVEN. He was awarded the Silver Star Medal, the Air Medal, and a Gold Star in lieu of the Second Air Medal. The citations follow in part:

Silver Star Medal:  “For conspicuous gallantry and intrepidity as Commanding Officer of Torpedo Squadron SEVEN… in action against enemy Japanese forces in the vicinity of Formosa on January 3, 1945. When his torpedo hung up in the bomb bay of his plane during a strike against an enemy convoy, (he) returned alone and executed a second run over the hostile vessels in the face of antiaircraft fire, bringing the attack to a successful conclusion...”

The citations for the Air Medal and Gold Star in lieu of the Second Air Medal are worded similarly except for the number of missions completed:  “For meritorious achievement… in action against enemy Japanese forces in the vicinity of Formosa, Nasei Shoto, Philippine Islands, French Indo China and the southern Coast of China from December 18, 1944 to January 25, 1945…” Participating in five and ten missions each during this period, he contributed materially to the success of his squadron and to the infliction of damage on enemy shipping, airfields and installations...”

He is also entitled to the Ribbon for, and a facsimile of the Navy Unit Commendation awarded the USS Hancock.

Detached from command of Torpedo Squadron SEVEN in February 1945, he next command Composite Squadron SIXTY EIGHT until August of that year. Following duty in the Research and Development Division of the Bureau of Ordnance, Navy Department, Washington, DC, he reported in December 1948 as Air Officer on board USS Antietam. In May 1949 he joined USS Boxer to serve as Air Officer and Assistant Operations Officer in the Korean area during hostilities there.

In January 1951 he was assigned to the Material Division, Bureau of Ordnance, Navy Department, and in April 1953 reported as Assistant Chief (Air) on the staff of Flag Officer Atlantic Coast, with headquarters at Halifax, Nova Scotia. In April 1955 he became Commanding Officer of the Naval Air Facility, china Lake, California.