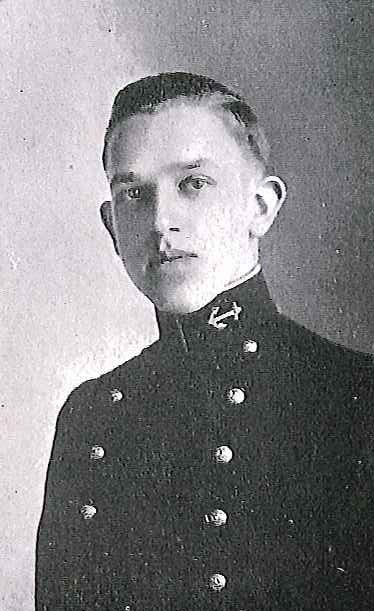 After graduation in June 1912, he was assigned to USS Virginia and in October of that year joined USS Arkansas. In August 1913 he was transferred to USS Paducah and served in her while she operated in Mexican waters in 1914. He served in USS New Jersey from May 1915 until May 1916, when he was ordered to USS Ammen which operated during the World War with the Destroyer Force based on Queenstown, Ireland. Detached from the Ammen in June 1918, he returned to the United States. After assisting in fitting out USS Lamberton, he was assigned duty in that destroyer when she was commissioned August 22, 1918, and served as her Executive Officer from December 1918 until June 1919. He then assumed command of USS McCall.

Between July 1919 and August 1921, he was Assistant Recruiting Inspector and later Recruiting Inspector, New England Division, Headquarters, Boston, Massachusetts. In August 1921 he joined USS Wadsworth and served in her until she was decommissioned in June 1922, after which he reported for instruction in submarines at the Submarine Base, New London, Connecticut. He served in the submarine S-30 from September 1922 until January 1923, and after fitting out USS S-24 commanded that submarine from her commissioning, August 24, 1923, until June 1924. The two succeeding years he had duty in the Ships Movements Division, Office of the Chief of Naval Operations, Navy Department, Washington, DC. In June 1926 he assumed command of USS Brooks, serving in that command until June 1929.

He was Aide to the Chief of the Bureau of Navigation, Navy Department, Washington, DC, between July 1929 and May 1931. He then served as Aide and Flag Secretary on the Staff of Commander Battleship Divisions, Battle Force; Commander Battle Force and Commander in Chief, US Fleet successively. From June 1933 until July 1935, he was on duty in the Detail Section, Bureau of Navigation, Navy Department.

He was Commander, Destroyer Division ELEVEN, Battle Force, USS Perry flagship, from July 1935 until June 1937. He was then assigned duty as Aide to the Chief of Naval Operations, Navy Department. Detached from that assignment in August 1939, he served as Commander Destroyer Division EIGHTEEN until June 1940, and Commander Destroyer Squadron ONE until January 1941. During March 1941 he was Special Naval Observer at the American Embassy, London, England. He was Chief of Staff and Aide to the Commander Support Force, Atlantic Fleet, from April 7 to December 26, 1941, and was awarded the Legion of Merit for “exceptionally meritorious conduct…as Chief of Staff of a Task Force, United States Atlantic Fleet, during the period April 7 to December 26, 1941. As the officer charged with the development and organization of this Task Force (he) demonstrated the utmost skill and diplomacy in obtaining the wholehearted cooperation of the Allied Forces. His outstanding ability and untiring efforts in organizing and administering many of the vital operations for which this Task Force was responsible assisted materially in the successful war against enemy submarines and the convoying of our shipping to the United Kingdom.”

On January 2, 1942, he reported for duty in the Navy Department as Assistant to the Chief of the Bureau of Navigation. When the Bureau was redesignated the Bureau of Personnel on May 21, 1942, he became Assistant Chief of Naval Personnel, serving in that assignment until March 1945. He was awarded the Distinguished Service Medal “for exceptionally meritorious service…as Assistant Chief of Naval Personnel, from January 2, 1942, to March 29, 1945. Undertaking this exacting assignment during a period of crisis in the history of the Navy, (he) achieved distinctive success in advancing the difficult and complex program of rapid expansion in personnel necessary to the manning of ships and shore bases in widespread areas of operations…His splendid leadership and tireless devotion to the fulfillment of a vital mission were essential factors in the successful functioning of a Navy of global proporations…”

He was Commander Battleship Division NINE, from March to September 1945. Under his command that Division, during the spring and summer of 1945, with USS Wisconsin as flagship, operated in support of the Okinawa landings, was a part of the fast task force which struck at Japanese home islands and participated in shore bombardments of Hokkaido and Honshu. For exceptionally meritorious service in this duty he was awarded a Gold Star in lieu of the Second Legion of Merit “…as Commander of a Battleship Support Unit, May 24, to August 2, 1945, and a Commander Battleship Division NINE from July 1 to August 15, 1945, during operations against the Japanese Home Islands. With his command trained to a peak of combat readiness for strikes against vital targets in the islands of Kyushu, Shikoku, Honshu, and Hokkaido (he) participated in an unremitting offensive during long and rigorous operations which resulted in the infliction of extensive and costly damage on important Japanese industrial installations. As officer responsible for controlling radar countermeasures for the Task Group, he conducted experimental exercises which pioneered certain aspects of the problems in this field for the defense of a surface force and thus provided the naval forces with an effective defensive weapon…”

On February 28, 1947, Admiral Denfeld assumed duty as Commander in Chief, Pacific Fleet, with the rank of Admiral. On July 18, 1947, he was appointed the first High Commissioner of the Trust Territories, and on November 13, 1947 he succeeded Fleet Admiral Chester W. Nimitz, USN, as Chief of Naval Operations, assuming his new duties on December 15, 1947. On November 2, 1949 he was succeeded by Admiral Forrest P. Sherman, USN, as Chief of Naval Operations and on January 1, 1950, reported to the Commandant First Naval District, Boston, Massachusetts for duty. He remained in that assignment until relieved of active duty pending his retirement on March 1, 1950.