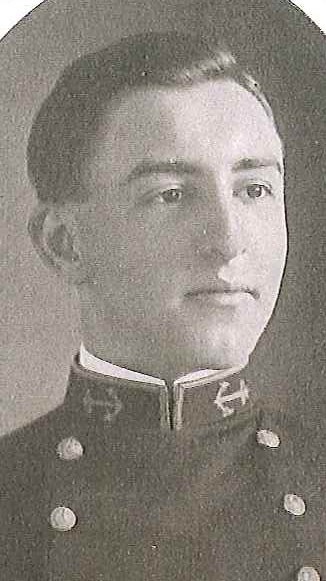 Joseph Mason Deem was born in Delhi, Ohio, on November 9, 1888. He entered the US Naval Academy, Annapolis, Maryland, on appointment from the Tenth District of Tennessee in 1905. Graduated on June 4, 1909, he served the two years at sea, as then required by law, before he was commissioned Ensign, June 5, 1911. Advancing progressively in rank, he subsequently attained that of Commander, to date from June 6, 1929. On June 30, 1937, he was transferred to the Retired List of the US Navy.

Following graduation from the Naval Academy in 1909, he remained there until October of that year, then joined USS Louisiana. In April 1910 he transferred to USS New York and between August and December 1910 had consecutive duty in USS Rainbow and USS Albany. After instruction in submarines in USS Shark, he reported in August 1911 on board USS Wheeling. At Guantanamo Bay, Cuba, after the completion of the target practice, he was detached from the Wheeling and in March 1913 was assigned to further training in submarine in USS Castine. From October 1913 to the summer of 1914 he served in USS G-One, with additional duty in USS G-Four. He was relieved of the additional duty in July 1914, at which time he assumed command of the G-One.

Ordered to St. Louis, Missouri, he had temporary duty in connection with the engines of USS L-Five, from February to July 1916, after which he had fitting out duty in that submarine at the Lake Torpedo Boat Company. He assumed command of the L-Five upon her commissioning, February 15, 1918, and in April of that year was assigned duty in connection with fitting out USS S-Thirty at the Union Iron Works. He was detached from the S-Thirty before she was commissioned and in March 1920 became Commanding Officer of USS Hart, operating with the Asiatic Fleet. While in command of the Hart he had temporary duty during November 1920 as Commander South China Patrol. Transferred in December 1921 to command of USS Hovey, he next served, September-November 1922, as Commanding Officer of USS Buffalo.

He had training in lighter-than-aircraft at the Naval Air Station, Lakehurst, New Jersey, and in the airship Shenandoah, (formerly ZR-One) based at Lakehurst, from her commissioning in October 1923. In May 1925 he was detached from the Lakehurst Air Station, when disqualified physically for aviation duty. He commanded USS Sharkey until June 1928, when he reported for instruction (junior course) at the Naval War College, Newport, Rhode Island. From June 1931 to May 1932 he was assigned to the Executive Department at the Naval Academy. Duty from June 1931 to May 1932 as Navigator of USS Lexington was followed by further sea service in USS Bushnell.

Returning to the Naval War College in June 1933 he was a student (senior course) until May 1934, then remained for duty on the staff until May 1936. He next served with Destroyers, Scouting Force and in January 1937 became Commander Destroyer Division SIXTY-TWO. In February 1937 he assumed command of the USS Medusa and early in June of that year was relieved of all active duty pending he retirement, effective June 30, 1937.

Commander Deem was awarded the decoration Officer of the Order of the Savior by the Government of Greece. He also had the Victory Medal, Submarine Clasp (World War I).