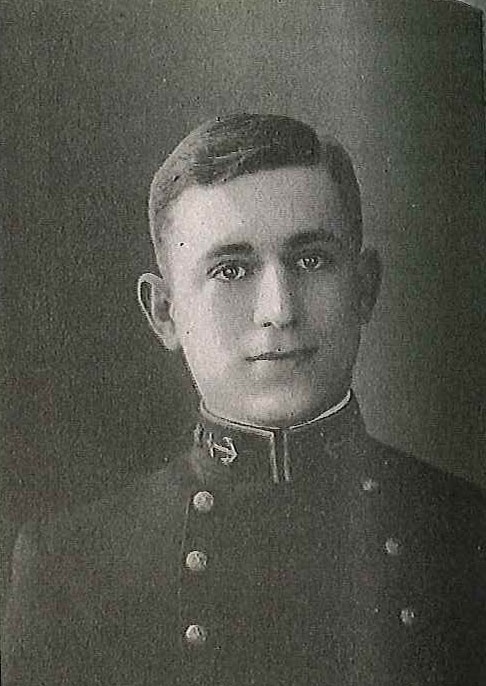 Edward Ellsberg was born in New Haven, Connecticut, on November 21, 1891, son of Joseph and Edna Lavine Ellsberg. He received his education from the US Naval Academy, Massachusetts Institute of Technology and the University of Colorado, and holds the degrees of Bachelor of Science, Master of Science, Doctor of Engineering, and Doctor of Science, (awarded by Bowdoin College).

Appointed Midshipman to the Naval Academy from Colorado, he participated in Athletics , winning the Navy “N” in fencing. He was graduated with distinction, first in the Class of 1914, and commissioned Ensign in the US Navy on June 6, 1914. He transferred from the Line to the Construction Corps of the Navy on June 6, 1919 and resigned his commission, while holding the rank of Lieutenant Commander on December 5, 1926. Commissioned in that rank in the US Naval Reserve on December 18, 1927, he was promoted to Commander (by act of Congress) on February 18, 1929, and to Captain, his date of rank May 25, 1942. His retirement in the rank of Rear Admiral, dates from December 1, 1951.

After graduation from the Naval Academy in June 1914, he was assigned for eighteen months to USS Texas. He returned to Annapolis in January 1916 for instruction in Naval Construction at the Postgraduate School, and continued the course at the Massachusetts Institute of Technology, Cambridge, Massachusetts. In April 1917, when the United States entered World War I, he was ordered to the Navy Yard, New York, where he served throughout the war period and until September 1919. He then returned to MIT and was graduated with the degree of Master of Science in 1920.

Ordered next to the Navy Yard, Boston, Massachusetts, he served in the Industrial Department for five and one-half years. In September 1925, under command of Captain (now Fleet Admiral) Ernest J. King, USN, he was Salvage Officer for USS S-51 which was sunk off Block Island, and for his services in the salvaging of that submarine he was awarded the Distinguished Service Medal, the first occasion for that medal to be awarded in time of peace. The citation accompanying the medal stated “For exceptionally meritorious salvaging of USS S-51.”

Following his resignation in December 1926, and his appointment in the US Naval Reserve a year later, he was called to active duty and, again under Admiral King’s command, was largely responsible for the raising of USS S-4, which had sunk off Provincetown, Massachusetts. In recognition of his work in the salvaging of that submarine, and also the S-51, he received a promotion in rank by Special Act of Congress, approved February 18, 1929. He again resigned his commission on May 9, 1940, but was reappointed Lieutenant Commander, USNR, on December 8, 1941.

Reporting for active duty on December 11, 1941, he was sent to rehabilitate the Naval Base at Massawa, Eritrea, which had been wrecked by the Italians before they evacuated the port earlier that year. The citation to the Legion of Merit, awarded him for that service, follows in part: “For exceptionally meritorious conduct in the performance of outstanding service to the Government of the United States in the establishment of a Massawa Naval Base, Eritrea, from January 8, 1942 to April 5, 1943. Working with tireless energy at a task considered in some respects as hopeless of accomplishment, Captain Ellsberg achieved remarkably successful results in the salvaging and repair of vital Naval equipment. . . (and) made possible extensive drydocking operations for the benefit of all types of Allied shipping.”

The equipment used at Massawa was later sent by plane to other parts of the North African theater and used in salvage work by Captain Ellsberg, who was commended for his service by General Dwight D. Eisenhower, Admiral Harold Stark and the British Admiralty. He was awarded a Gold Star in lieu of the Second Legion of Merit. “For . . .outstanding services as Principal Salvage Officer of the North AfricanTheater of Operations from November 1942 to February 1943. . .” The citation states that he was “directly responsible for clearing the vital ports of North Africa and salvaging Allied vessels in the Mediterranean Area. . .”

Detached from the US Military North African Mission on April 5, 1943, he reported to the Bureau of Ships, Navy Department, on April 17. A month later he was sent to the Office of the Supervisor of Shipbuilding, New York, NY, where he served for a year. On May 2, 1944, he reported to Headquarters of Commander U. S. Naval Forces in Europe, London, England, was immediately ordered by Admiral Stark to the channel in connection with the Artificial Harbors project, and with that organization crossed the channel to take part in the Normandy Invasion on the Omaha Beach. On June 29, the same year, he was ordered to the staff of Commander Task Force 125, in connection with salvage operations. He returned to the United States, and on October 10, 1944 was ordered to Cleveland, Ohio, as Supervisor of Shipbuilding, with additional duty as Naval Inspector of Ordnance there.

On April 3, 1945, he was released to inactive duty status, and on May 27, 1945 was commissioned permanent Captain. He was advanced to the rank of Rear Admiral upon his retirement on December 1, 1951, on the basis of citations awarded for combat.

In addition to the Distinguished Services Medal, the Legion of Merit with Gold Star, and his various commendations, Rear Admiral Ellsberg has the Victory Medal (World War I); the Mexican Service Medal; American Campaign Medal; European-African-Middle Eastern Campaign Medal; and the World War II Victory Medal. He also has the Naval Reserve Medal with Bronze Star (20 years); and the Order of the British Empire (Commander), awarded by Great Britain.

Rear Admiral Ellsberg is a member of various clubs and societies, including American Polar Society, P.E.N. Club, Society of American Historians, Explorers Club, American Petroleum Institute, New Jersey Society of Professional Engineers, Northeastern Harbor Fleet, Army and Navy Club (Washington), and Military-Naval Club (New York). He is the author of many books, including “On the Bottom,” “Men Under the Sea,” “Cruise of the Jeannette,” “Hell on Ice, the Saga of the Jeannette,” “No Banners, No Bugles,” “Ocean Gold,” “ ‘ I Have Just Begun to Fight’ “, “Captain Paul,” “Pigboats,” “Submarine Treasure,” “Under the Red Sea Sun,” “Treasure Below,” and his latest, “Mid Watch.”