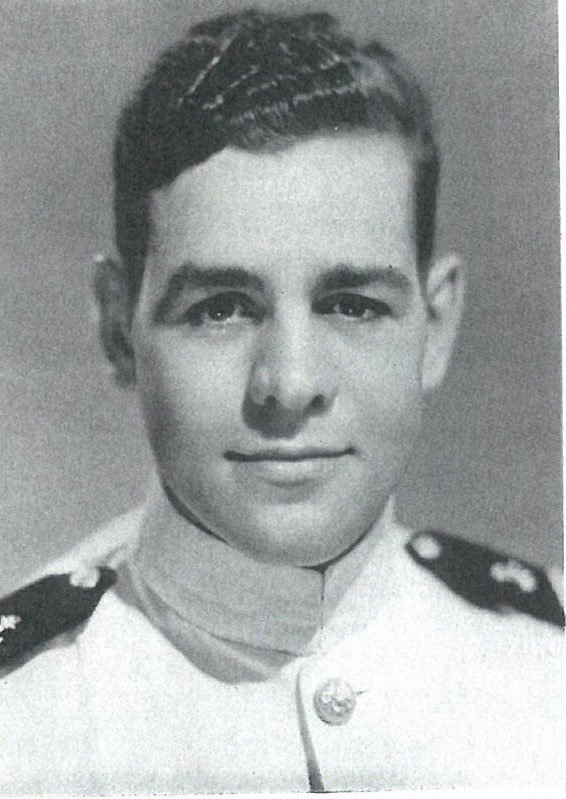 John Alden Camera was boin in Media, Pennsylvania, on February 15, 1918, son of Nicholas A. Camera and the late Mrs.Bertha May (Kendrick) Camera. He attended Allentown (Pennsylvania) High School and enlisted in the US Navy in October 1935. Completing recruit training at the Naval Training Station, Norfolk,Virginia, in January 1936, he served as a seaman on board the USS Arkansas for ten months, and was a student (Naval Academy Preparatory course) at the Naval Base in Norfolk until June 1937, when he was honorably discharged to enter the Naval Academy, Annapolis, Maryland. Graduated with the Class of 1941 on February 7 of that year (course accelerated due to National Emergency), he was commissioned Ensign in the US Navy from that date, and through subsequent advancement attained the rank of Captain, to date from August l, 1959.

After graduation from the Naval Academy in February 1941, he was assigned to USS Grayson (DD-435) in March and continued duty on board that destroyer for ten months after the outbreak of World War II in December 1941. During that period the Grayson participated in anti-submarine patrol operations in the North Atlantic until February 1942, then moved to the Pacific in time to accompany USS Hornet on her Tokyo expedition, and to take part in landing operations at Guadalcanal in August 1942.

In October 1942 he was detached for instruction at the Naval Air Station, Pensacola, Florida and, designated a Naval Aviator on August 14, 1943, he remained there as a Flight Instructor until September 1944. That month he joined Compostite Squadron THIRTY-THREE and served throughout the remaining war period as Squadron Executive Officer. He was awarded the Air Medal "For meritorious achievement in aerial flight

as a Division Leader in Composite Squadron THIRTY THREE, attached to USS Lunga Point, in action against enemy Japanese forces in the Philippine Islands from August 8 to 15, 1945..." The citation states that during this time he participated in five strikes against Japanese installations and troop concentrations, and contributed materially to the infliction of damage on the enemy despite antiaircraft fire.

From May 1946 until July 1947 he was Commanding Officer of Attack Squadron TWO-A, and for three years thereafter served as Flight Instructor in the Naval Air Basic Training Command, Pensacola. During the period August 1950 to June 1953 he served as Anti-Submarine Warfare and Operations Officer on the Staff of Commander Fleet Air, Hawaii, and for two years after his return to the United states he was in Instructor in the Department of Navigation at the Naval Academy. Duty from July 1955 to June 1956 as Commanding Officer of Scouting Squadron TWENTY-FOUR preceded his assignment in July 1956 to the Office of the Chief of Naval Operations, Navy Department, Washington, DC. There he served for two years as Bureau of Aeronautics Technical Representative, in the Logistics Planning Divison.

He was a student at the Fleet Training Center, Norfolk,Virginia, from July to October 1958, when he assumed command of Transport (Air Ferry) Squadron THIRTY-ONE. In October 1960 he joined the Staff of the Naval War College, Newport, Rhode Island, and in July 1962, became Commanding Officer of the Naval Station, Rota, Spain. In August 1965 he reported for duty as Assistant Director, Logistic Plans Division, Office of the Chief of Naval Operations, Navy Department, Washington, DC, and in September 1967 was designated Chief of Staff and Aide to Commander Key West Force.