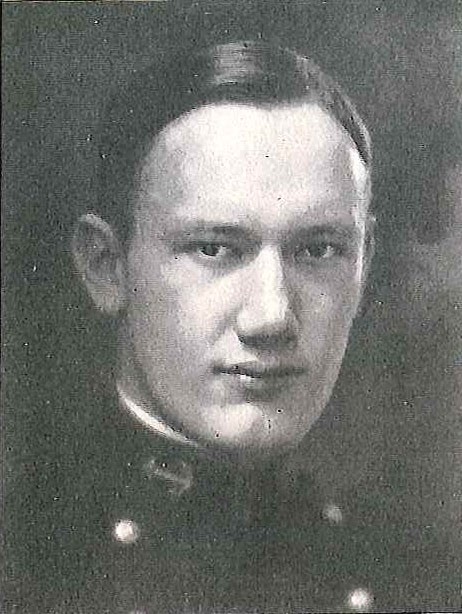 Walter Theodore Eckberg was born October 16, 1901, in Jamestown, New York, son of Arvid W. and Clara A. (Lundquist) Eckberg.  He attended Janestown High School, before his appointment to the US Naval Academy Annapolis, Maryland, from the Forty0third District of his native state in 1920.  As Midshipman he was a member of the varsity wresting squad.  Graduated and commissioned Ensign on June 5, 1924, he transferred in 1927 to the Civil Engineer Corps, and subsequently attained the rank of Captain to date from June 1, 1943.

Following graduation from the Naval Academy in 1924, he had temporary duty under instruction until August od that year at the Navy Yard, Philadelphia, Pennsylvania after which he joined USS Wyoming.  Detached from that battleship in July 1925, he reported for instruction in civil engineering at the Postgraduate School, Annapolis, Maryland.  He continued the course, from June 1926 to June 1928 at the Rensselaer Polytechnic Institute, Troy, New York, where he received the degree of Master of Science.

He was assigned to the Bureau of Yards and Docks, Navy Department, Washington, DC, and two months later became Civil Engineer at the Navy Yard, Boston, Massachusetts.  He continued to serve there until January 1930, when re reported for duty in the Sixth Naval District, Charleston, South Carolina.  From October 1931 to August 1932 he was Public Works Officer of the Seventh Naval District, Key West, Florida, followed by an assignment at the Navy Yard, Norfolk, Virgiia.

Between June 1934 and October 1936 he was attached to the Naval Station, Guam, Marianas Islands, as Public Works Officer, with additional duty under the Island Government.  Following service at the Navy Yard, New York, New York, he transferred in September 1939, to the Navy Yard, Portsmouth, Virginia, and in April 1942 became Public Works Officer there.  He remained in that capacity until November 1942, when he reported as Officer in Charge of the Advanced Base Depot at the Receiving Barracks, Gulfport, Mississippi.

Proceeding to Pearl Harbor, Territory of Hawaii, he served from March 1944 to January 1945 in the Pacific Division of the Bureau of Yards and Docks, with further duty as Officer in Charge of the Advanced Base Construction Depot, Pearl Harbor.  He was subsequently assigned similar duty at the Advanced Base Construction Depot, Guam.  “For meritorious service….(in the latter capacity)….during operations against enemy Japanese forces on the island, from April 1 to September 2, 1945….” He was awarded the Bronze Star Medal.  The citation continues in part:

“….Captain Eckberg efficiently directed the building of one of the largest and most important construction depots in the Pacific Area and, by his own outstanding organizational and executive ability, contributed materially to the success of his depot in outfitting the forward-moving battalions and in filling the supply requirements of island construction….”