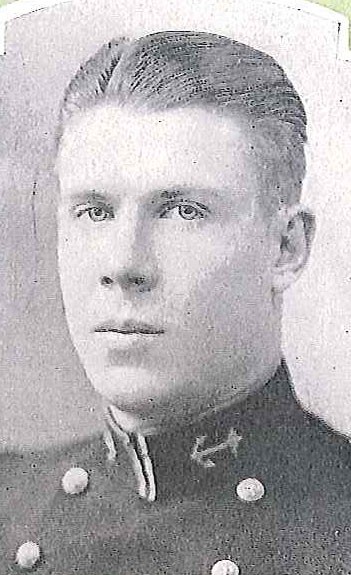 John Eldridge, Jr., the son of John Eldridge and Mrs. (Lillian Emma Moorman) Eldridge, was born on October 10, 1903, in Buckingham, Virginia. He graduated from Buckingham High School, and attended William and Mary College, Williamsburg, Virginia, for one year, prior to his appointment to the US Naval Academy at Annapolis, Maryland, from the Tenth Congressional District of his native state in 1923. As a Midshipman he was a member of the wrestling squad and participated in company football. Graduated and commissioned Ensign on June 2, 1927, he subsequently attained the rank of Lieutenant Commander, January 1, 1942.

Following graduation form the Naval Academy in 1927, he remained there for the short course in aviation until August of that year, when he reported aboard USS Pennsylvania, flagship of Division THREE, Battleship Divisions, Battle Fleet. While attached to that battleship he had temporary additional duty in attendance upon a course in aviation at the Naval Air Station, San Diego, California. Detached from the Pennsylvania in March 1929, he had flight training at the Naval Air Station, Pensacola, Florida. He was designated Naval Aviator and in December 1929 joined Scouting Squadron TWO-B, based aboard USS Saratoga, operating with Aircraft Squadrons, Battle Fleet.

In January 1932 he returned to the Naval Air Station, Pensacola, for duty until September of that year, and in January 1933 was assigned to the Naval Air Station, Naval Operating Base, Norfolk, Virginia. He continued to serve there for a year prior to joining the aviation unit aboard USS Mississippi. He reported in June 1936 for duty with Utility Squadron TWO-F, transferring in March 1937 to Patrol Squadron THREE-F, operating with Aircraft, Base Force, based at San Diego, California.

Between May and July 1939 he served with the Fleet Air Detachment attached to the Naval Air Station, Norfolk, Virginia, after which he was assigned to Patrol Wing FIVE, with additional duty with Scouting Squadron SEVENTY ONE, attached to USS Wasp, In September 1941 he assumed command of that squadron and was so serving at the time he was killed in action on November 2, 1942, when his plane crashed in Tannibuli Bay, on the southwestern tip of Isabel Island.

For heroism as Commanding Officer of Scouting Squadron SEVENTY ONE he was posthumously awarded the Navy Cross, the Gold Star in lieu of the second Navy Cross and the Distinguished Flying Cross. The citations follow in part:

Navy Cross- - “For heroism. . . .during action against enemy Japanese forces in the Solomon Islands on August 7-8, 1942. Leading the first dive-bombing attack against hostile positions on the islands of Gavutu and Tanambogo, (he) . . . . personally destroyed Japanese gun emplacements in front of the Marine Landing Area on Gavutu Island thereby making possible a successful landing in that area. His proficient skill and timely effectiveness in directing the bombing of enemy gun positions, stores and dugouts contributed materially to the seizure of the islands. . . .”

Gold Star in lieu of the Second Navy Cross- - “For extraordinary heroism. . . .in the Solomon Islands Area in October 1942. Leading an early morning flight against a Japanese seaplane base at Rekata Bay, Santa Isabel Island on October 5, (he) launched a vigorous attack, inflicting considerable damage on enemy float planes and anti aircraft emplacements in spite of extremely adverse weather conditions. Returning to Guadalcanal after being rescues from a forced landing he led several daring scout-bombing attacks against enemy ships, causing fires and in one known instance, sinking a Japanese destroyer. . . . .”

Distinguished Flying Cross - - “For heroism and extraordinary achievement. . . . against enemy forces in the Solomon Islands on October 25, 1942. Despite continual enemy strafing and shelling of mud-covered Henderson Field and without benefit of fighter escort, (he) skillfully effected an extremely difficult take-off in order to participate in a vital bombing raid on approaching hostile surface vessels. In the ensuing engagement he courageously pressed home his attacks expertly and with fierce aggressiveness in the face of intense anti-aircraft fire, thus materially assisting his four-plane group of bombers in destroying a heavy cruiser and severely damaging another Japanese warship. . . .”

He was also awarded posthumously the Purple Heart Medal.

A destroyer escort, USS Eldridge (DE-173) was named in his Honor. She was sponsored by his widow.