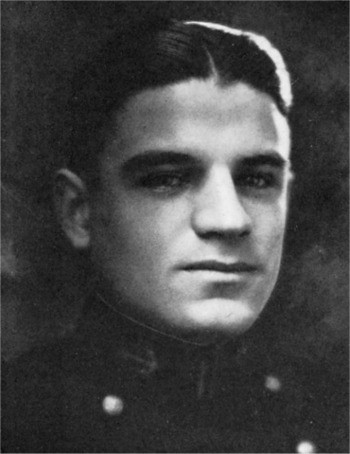 José Manuel Cabanillas was born in Mayagüez, Puerto Rico, on 23 September 1901, son of José C. Cabanillas and Asunción Grau de Cabanillas. He received his early education in private schools, and attended Marion (Alabama) Institute and the Army and Navy Preparatory School in Washington, D.C. Entering the US Naval Academy, Annapolis, Maryland, on appointment at large on 16 June 1920, he participated in Class football and track. He graduated and was commissioned as an Ensign on 4 June 1924, and through subsequent promotions, attained the rank of Rear Admiral, 1955.

After graduation from the Naval Academy in 1924, he had three year's duty at sea, serving successively in the battleships USS Florida, USS Colorado, USS Oklahoma, and the repair ship of Train Squadron Base Fleet USS Vestal. From June 1927 to January 1928 he received instruction in submarines at the Submarine Base, New London, Connecticut, after which he served in the USS S-3 until May 1930. He then returned to Annapolis for instruction in communication engineering at the Postgraduate School, and continuing the course at Yale University, New Haven, Connecticut, received the degree of Master of Science in June 1932.

A year's duty in the cruiser Northampton preceded duty from June 1933 to April 1935 as Squadron Radio and Sound Officer of Submarine Squadron 3, with additional duty at the Submarine Base, Colo Solo, Canal Zone. He then became District Communication Officer, Tenth Naval District, San Juan, Puerto Rico, and was also in command of the Naval Radio Stations at San Juan and Cayey, Puerto Rico; and St. Thomas, Virgin Islands. Detached in July 1937, he had sea duty for two years first as Executive Officer of the destroyer USS Taylor and later aboard the cruiser USS Raleigh.

He was next ordered to Balboa, Canal Zone, and served from September 1939 to June 1942 as Radio Material Officer. He joined the USS Texas in July 1942, and served as her Navigator until December 1943, and as Executive Officer for a year thereafter. During his period of service aboard the Texas engaged in routine operations in the Atlantic until October 1942; participated in the Invasion of North Africa in November of that year; was engaged in escort of North African convoys in 1943; and took part in the Invasions of Normandy and Southern France in June and August 1944, respectfully.

Captain Cabanillas was awarded the Bronze Star Medal with Combat "V," for "meritorious achievement and outstanding performance of duty as Executive Officer of the USS Texas during the Invasion of Normandy and the bombardment of Cherbourg, France, in June 1944..." The citation states: "Taking over ship control in the conning tower after an enemy shell had destroyed the bridge, the primary control station, Captain Cabanillas rendered invaluable service to his commanding officer in the performance of the assigned mission..."

Detached from the Texas late in 1944, he assumed command on 3 January 1945 of the USS Grundy (APA 111). He continued in command throughout the remaining period of hostilities, and when detached in October returned to the United States. From December 1945 to June 1949 he served as Director of Discipline for the Fifth Naval District, Norfolk, Virginia, and for a year thereafter was Commanding Officer of the Naval Station at Orange, Texas.

He was in command of the USS Dixie (AD-14) from June to September 1950, participating in operations in the Korean Area (first United Nations Counter Offensive). In October 1950 he reported as Chief of Staff for Logistics to the Commandant Fourteenth Naval District, Pearl Harbor, T.H., and while in that assignment had additional duty on the staff of Commander Hawaiian Sea Frontier until May 1952.

Rear Admiral Cabanillas died on 15 September 1979 in the Veterans Hospital in Richmond.