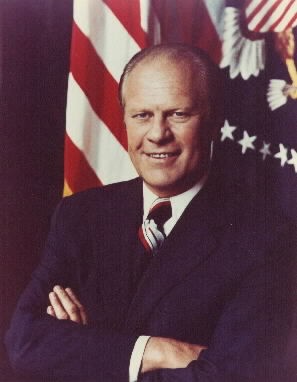 Known to his friends as “Jerry,” President Ford was born Leslie King, Jr. on 14 July 1913 in Omaha, Nebraska. After his parents divorced, his mother moved to Grand Rapids, Michigan, and married a prominent business man, Gerald R. Ford, who adopted him and gave him his name. Gerald Ford, Jr. spent his childhood in Grand Rapids and graduated from the former South High School. He later earned a Bachelor of Arts degree in 1935 from the University of Michigan where he was a member of the senior honor society Michigamua. He received his law degree from Yale University Law School in 1941, was admitted to the Michigan State Bar that same year, and was admitted to practice before the United States Supreme Court. In 1965, he was awarded the honorary degree of Doctor of Laws by Michigan State University and Albion, Aquinas and Spring Arbor Colleges; in 1968 by Buena Vista and Grove City Colleges; in 1972 by Belmont Abbey College (North Carolina); in 1973 by Western Michigan University; and in 1975 by Southern Methodist University. He received a Doctor of Public Administration degree from American International College in 1968.

President Ford was an accomplished athlete. He won all-city and all-state football honors in Grand Rapids during high school. While earning three varsity letters, he was a member of the University of Michigan’s undefeated national championship teams of 1932 and 1933, and was named Michigan’s most valuable player in 1934, playing center. On New Year’s Day, 1935, he participated in the Shrine East-West Crippled Children’s Benefit Classic in San Francisco. That August he played in the All-Star game against the Bears in Chicago. While a Yale law student, he was assistant varsity football coach. In 1959, he was selected by Sports Illustrated to receive its Silver Anniversary All-American Award as one of the 25 football players in the preceding quarter century who had contributed most to their fellow citizens. In 1972, he was awarded the National Football Foundation’s gold medal for close association with the game.

Ford received a commission as ensign in the US Naval Reserve on 13 April 1942 and ultimately served 47 months on active duty during World War II. His background as a coach and trainer made him a good candidate for instructor in the Navy's V-5 (aviation cadet) program. On 20 April, he reported for active duty to the V-5 instructor school at Annapolis, Maryland. After one month of training, he went to Navy Preflight School in Chapel Hill, North Carolina, where he was one of 83 instructors and taught elementary seamanship, ordnance, gunnery, first aid, and military drill. In addition, he coached in all nine sports that were offered, but mostly in swimming, boxing and football. During the one year he was at the Preflight School, he was promoted to Lieutenant Junior Grade on 2 June 1942 and to Lieutenant on 1 March 1943.

Applying for sea duty, Ford was sent in May 1943 to the pre-commissioning detachment for a new light aircraft carrier, USS Monterey (CVL-26) at New York Shipbuilding Corporation, Camden, New Jersey. From the ship's commissioning on 17 June 1943 until the end of December 1944, Ford served as the assistant navigator, athletic officer, and anti-aircraft battery officer on board Monterey. While he was on board, Monterey participated in many actions in the Pacific with the Third and Fifth Fleets during the fall of 1943 and in 1944. In 1943, the carrier helped secure Makin Island in the Gilberts, and participated in carrier strikes against Kavieng, New Ireland in 1943. During the spring of 1944, Monterey supported landings at Kwajalein and Eniwetok and participated in carrier strikes in the Marianas, Western Carolines, and northern New Guinea, as well as in the Battle of Philippine Sea. After overhaul, from September to November 1944, aircraft from Monterey launched strikes against Wake Island, participated in strikes in the Philippines and Ryukus, and supported the landings at Leyte and Mindoro.

Although the ship was not damaged by the Japanese forces, Monterey was one of several ships damaged by the typhoon, which hit Admiral Halsey's Third Fleet on 18-19 December 1944. The Third Fleet lost three destroyers and over 800 men during the typhoon. Monterey was damaged by a fire which was started by several of the ship's aircraft tearing loose from their cables and colliding during the storm. During the storm, Ford narrowly missed being a casualty himself. As Ford headed for his battle station on the bridge of the ship in the early morning of 18 December, the ship rolled twenty-five degrees which caused Ford to lose his footing and slide toward the edge of the deck. The two inch steel ridge around the edge of the carrier slowed him enough so he could roll and twist into the catwalk below the deck. As he later stated, "I was lucky; I could have easily gone overboard."

After the fire, Monterey was declared unfit for service and the crippled carrier reached Ulithi on 21 December before preceding across the Pacific to Bremerton, Washington, where it underwent repairs. On Christmas Eve 1944 at Ulithi, Ford was detached from the ship and sent to the Navy Pre-Flight School, St. Mary's College, California, where he was assigned to the Athletic Department until April 1945. One of his duties was to coach football. From the end of April 1945 to January 1946, he was on the staff of the Naval Reserve Training Command, Naval Air Station, Glenview, Illinois, as the Staff Physical and Military Training Officer. On 3 October 1945, he was promoted to Lieutenant Commander. In January 1946, he was sent to the Separation Center, Great Lakes, Illinois, to be out processed. He was released from active duty under honorable conditions on 23 February 1946. On 28 June 1963, the Secretary of the Navy accepted Ford's resignation from the Naval Reserve.

On 15 October 1948, he married Elizabeth Bloomer of Grand Rapids. The Fords had four children: Michael Gerald (born 15 March 1950); John Gardner (16 March 1952); Steven Meigs (19 May 1956); and Susan Elizabeth (6 July 1957). President Ford was a member of Grace Episcopal Church, Grand Rapids. He maintained active membership in the American Legion, Veterans of Foreign Wars and AMVETS, and was a 33rd Degree Mason.

During his first term, Congressman Ford was named to the House Public Works Committee. In 1951 he was assigned to the Appropriations Committee where he served on the Army Civil Functions Subcommittee and the Emergency Agency Subcommittee. During the 83rd and 84th Congresses, he was a member of the Subcommittees on Foreign Operations and the Department of Defense and was on the Army Panel serving as Panel chairman in the 83rd Congress. During the 85th Congress, he was appointed to the Select Committee on Astronautics and Space Exploration. Congressman Ford remained a member of both the Defense and Foreign Operations Subcommittees of the House Appropriations Committee throughout the 85th, 86th, 87th and 88th Congresses. He was senior Republican on the Defense Subcommittee before becoming Minority Leader.

Congressman Ford served as a member of the Republican Leadership in Congress beginning in January 1963; was chairman of the Republican Conference of the House during the 88th Congress (1963-64) and had been a member of the House Republican Policy Committee for over nine years. On 4 January 1965 he was chosen Minority Leader of the House of Representatives at the opening of the 89th Congress. In November 1972 he was re-elected to his thirteenth consecutive term as a member of Congress, having served since 3 January 1949, but he resigned 6 December 1973 to become Vice President. He maintained an attendance record of over 90 percent throughout his 24-year tenure. 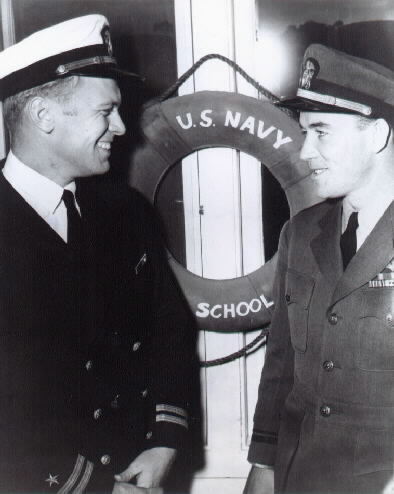 Congressman Ford was nominated on 12 October 1973 to succeed Spiro T. Agnew as Vice President. His nomination was confirmed by the Senate on 27 November 1973 by a vote of 92 to 3 and by the House on 6 December 1973, by a vote of 387 to 35. He was sworn in as Vice President on 6 December 1973, the first person to be so selected according to provisions of the 25th Amendment to the Constitution.

President Ford's administration is notable for many events, the most controversial probably being the pardon of former President Richard M. Nixon. On 8 September 1974, only a month after being sworn in, President Ford signed Proclamation 4311 which granted "a full, free, and absolute pardon unto Richard Nixon for all offenses against the United States which he...committed or may have committed or taken part in during the period from January 20, 1969 through August 9, 1974." The pardon, which angered many Americans, ultimately contributed to national healing and reconciliation.

President Ford subsequently announced an amnesty program for draft dodgers and deserters of the Vietnam War era. About one fifth of the approximately 106,000 men eligible applied for amnesty under the program.

The year 1975 brought new challenges to Ford's presidency. In April 1975, the Vietnam War ended when the Republic of (South) Vietnam was conquered by the communist Democratic Republic of (North) Vietnam. President Ford requested from Congress $700 million in emergency military aid for South Vietnam, but when his request was rejected he arranged for American assistance in evacuating American allies and other refugees from that country. Nearly 100,000 refugees subsequently settled in the United States. In May 1975, an international incident occurred when the US merchant ship Mayagüez was seized by Cambodian communist Khmer Rouge forces in the Gulf of Thailand. President Ford chose to respond aggressively to this communist challenge and 200 US Marines were landed on the island of Koh Tang. After bloody fighting on the island between the Khmer Rouge and US Marines, all 39 crew members of Mayagüez were released.

In the 1976 election, President Ford narrowly won the Republican presidential nomination, having been challenged by former Governor Ronald Reagan of California. His Democratic opponent was former Governor Jimmy Carter of Georgia. For only the second time in US history, a series of debates between the presidential candidates was televised nationally. Ultimately, Jimmy Carter defeated President Ford by 1.7 million votes and a narrow margin in the electoral college.

Living in Rancho Mirage, California, President Ford remained physically and socially active after leaving the White House. He published his autobiography, A Time to Heal, in 1979. The Gerald R. Ford Presidential Library and Museum is located in Ann Arbor, Michigan. President Ford died at his home on 26 December 2006. 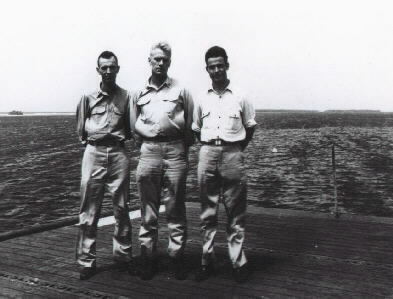 -In November 1963 was named by President Lyndon Johnson to the Warren Commission.

-Served as permanent chairman of the 1968 and 1972 Republican National Conventions.

-As Minority House Leader delivered some 200 speeches annually throughout the country.

-Visited the People’s Republic of China in late June and early July 1972 on behalf of the President.

-Lauded as a “Congressman’s Congressman” by the American Political Science Association when it conferred on him its Distinguished Congressional Service Award in 1961.

-Was presented the George Washington Award by the American Good Government Society in May 1966.

-Chosen by the American Academy of Achievement to receive the Golden Plate Award as one of fifty “giants of accomplishment,” presented during the Academy’s 10th annual Salute to Excellence in June 1971.

-Selected to receive the AMVETS Silver Helmet Award, that group’s highest recognition of Congressional service, at ceremonies in Washington in April 1971.

Phillips, Christopher. Steichen at War . New York: Harry N. Abrams, 1981 [See p. 161 for a black-and-white photograph of President Ford as an ensign in the US Navy playing basketball on USS Monterey in June 1944. Photograph by Victor Jorgensen.].