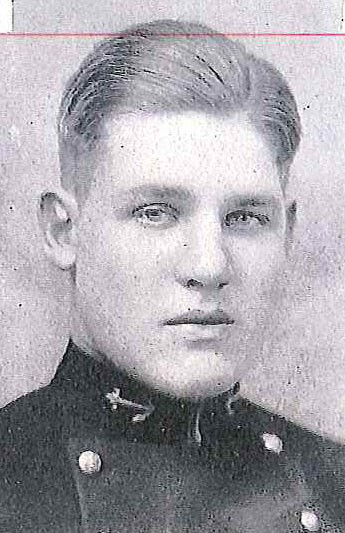 Captain Bergeson was born on October 29, 1905, in Washington, DC, the son of Mrs. Henrietta Bergeson and the late Andrew Bergeson. He attended Columbia and Devitt preparatory schools in Washington, DC, before receiving his appointment to the US Naval Academy at Annapolis, Maryland, from West Virginia in 1923. While a Midshipman he participated in class lacrosse. Graduated and commissioned Ensign on June 2, 1927, he advanced progressively in grade to the rank of Captain to date from March 20, 1945.

Following graduation from the Academy in 1927, Captain Bergeson reported in August of that year for duty aboard the battleship New York. Transferred to USS Osborne in May 1929, he served in the gunnery and torpedo departments and as Navigator of that destroyer until October 1929. Completing aviation training at the Naval Air Station, Pensacola, Florida, he was designated a Naval Aviator in June 1930, and reported in July for duty with Observation Squadron THREE-B, attached to USS New York. In July 1933 he joined Patrol Squadron TWO-F, based at Coco Solo, Canal Zone, and continued service with that squadron until June 1935.

Returning to the United States, Captain Bergeson was under instruction in General Line and radio engineering, from July 1935 until June 1937, at the Postgraduate School, Annapolis, Maryland. Continuing the course in radio engineering at Harvard University, Cambridge, Massachusetts, he received his Master’s Degree from that university in June 1938. Again ordered to duty at sea, he served as Flight and Executive Officer of Torpedo Squadron FIVE, based aboard USS Yorktown and in June 1939 joined the staff of Commander Aircraft, Scouting Force as Communication and Radio Officer.

In June 1940, Captain Bergeson transferred in the same capacity to the staff of Commander Aircraft, Atlantic and remained in that assignment a year when he reported as Head of the Aviation Electronics Research Development and Design Group in the Bureau of Ships, Navy Department, Washington, DC. There he was directly concerned with many wartime electronic developments such as ground control approach (radar) and other Naval air aids. He also directed the conversion of commercial plants to wartime production.

Captain Bergeson assumed command, in September 1944, of USS Chourre, and aviation logistics and repair ship, which served in the Western Pacific, the Philippines and Japan in support of the carrier task forces. Relieved of command of that auxiliary in June 1946, he reported as Assistant Director for Design in the Electronic Division, Bureau of Aeronautics, Navy Department. In that assignment he had direct supervision over research development and design of aviation electronic equipment. In June 1948 he assumed duty as Director of that division and in April 1949 was assigned to the Office of Naval Intelligence, Navy Department, for temporary duty before departing for Buenos Aires, Argentina, where he will serve as US Naval Attache and US Naval Attache for Air.