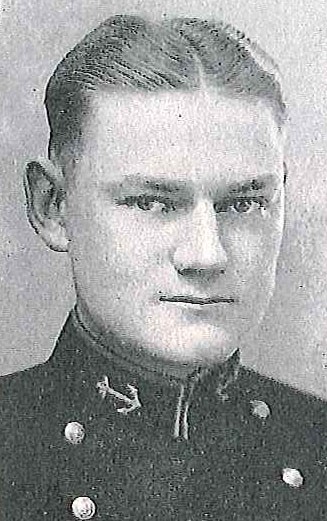 John Lawrence Ewing was born in Boston, Massachusetts, on February 26, 1904, son of John L. and Eleanor F. (Mullowney) Ewing, both deceased. He received his early education from Boston public schools and Boston Latin School, and attended Boston College for a year and one-half before his appointment to the US Naval Academy in 1923. Graduated and commissioned Ensign on June 2, 1927, he subsequently attained the rank of Captain, to date from March 20, 1945.

After graduation he remained at the Naval Academy for Aviation Indoctrination, and on August 20, 1927, reported to the battleship Utah, in which he served as a junior engineering officer for a year. On August 1, 1928 he was transferred to USS Galveston, and as Assistant Engineering Officer of that cruiser participated in operations in Nicaragua during the Second Nicaraguan Campaign in 1928-1929. He detached to return to the United States, and on March 29, 1929, reported to the Naval Air Station, Pensacola, Florida, for flight training. He completed the course and was designated Naval Aviator on November 0, [sic] 1929.

From December 28, 1929, to May 1934 he served successively in Utility Squadron 2-S, attached to USS Wright,  and Patrol Squadron 5-S, a unit of Aircraft Squadrons, based at Coco Solo, Canal Zone. While attached to the latter squadron, he participated in the Norfolk-to-Coco Solo Ferry Flight in September 1933 in plane 5-P-11. He and all other members of Patrol Squadron 5 received congratulatory messages from the Secretary of the Navy, the Chief of Naval Operations, and the Chief of the Bureau of Aeronautics on the accomplishment of the “longest non-stop formation seaplane flight in the history of aviation.”

Following two years’ service as Senior Aviator of USS Richmond, he reported on June 1, 1939, for duty with Patrol Squadron 53, based at Norfolk, Virginia. He continued duty as Gunnery Officer of that squadron until May 1940. Having been designed an Aeronautical Engineering Duty Officer in February 1940, he served from June of that year until July 1942 at the Naval Aircraft Factory, Philadelphia, Pennsylvania, being on duty there when the United States entered World War II.

On December 10, 1950, he became Assistant Bureau of Aeronautics Representative, Central District, Wright-Patterson Air Force Base, Dayton, Ohio. He continued duty in that capacity until July 1953, and on August 20 returned to the Bureau of Aeronautics, Navy Department, where he served as Executive Director, Material and Services Group, until August 23, 1955. Captain Weing[sic] is presently assigned as Overhaul and Repair Officer, Naval Station, Alameda, California.