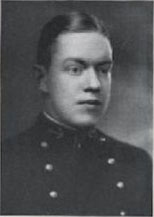 Commander Coe was born on 13 June 1909 in Richmond, Indiana, the son of Demas S. Coe and Mrs. Mary P. (Wiggins) Coe. He attended Morton High School in his native city before receiving his appointment to the US Naval Academy, Annapolis, Maryland, from the Sixth Indiana District in 1926. While a Midshipman, he was a member of the track squad. Graduated and commissioned Ensign on 5 June 1930, he attained the rank of Commander to date from 15 October 1942.

Following graduation from the Academy in 1930, Commander Coe was assigned to the USS Nevada until January 1931, when he was ordered to proceed to the Navy Yard, Mare Island, California, for fitting out duty in the USS Chicago. Upon her commissioning on 9 March 1931, he joined her and continued sea service in that cruiser until May 1933. Between June and December 1933 he was under instruction in submarines at the Submarine Base, New London, Connecticut. Completing the course he joined the USS S-27.

Navy Cross:
"For extraordinary heroism and conspicuous devotion to duty in the line of his profession as Commanding Officer of the USS S-39 operating in enemy controlled waters against enemy Japanese surface vessels. While conducting war patrols, Lieutenant Commander Coe boldly and successfully delivered an attack under hazardous and difficult conditions which resulted in the sinking of an armed enemy auxiliary vessel in Philippine waters, and later, a large enemy naval tanker in the Java Sea. Furthermore, while Commanding Officer of the USS Skipjack, he skillfully evaded enemy naval and air patrol to deliver a vigorous and effectively executed attack against enemy vessels, armed or escorted by anti-submarine craft. In these engagements, the Skipjack succeeded in destroying two large enemy auxiliaries and an enemy Japanese transport in the South China Sea and seriously damaging and presumably sinking another enemy armed auxiliary. Lieutenant Coe displayed the outstanding characteristics of a leader, and the aggressive and intrepid spirit of a fine seaman which were in keeping with the traditions of the United States Naval Service."

Commander Coe reported in January 1943 for duty in connection with fitting out the USS Cisco at the Navy Yard, Portsmouth, Virginia, and upon her commissioning on 10 May 1943, assumed command. When the Cisco failed to return from a war patrol in the South China Sea, Commander Coe was determined "missing in action," as of 6 November 1943. He was presumed dead on 8 January 1946.

He was posthumously awarded the Purple Heart Medal.

In addition to the Navy Cross and the Purple Heart Medal, Commander Coe had the China Service Medal, the American Defense Service Medal, Fleet Clasp, and was entitled to the Army Distinguished Unit Badge, the Asiatic-Pacific Campaign Medal with one bronze star, the World War II Victory Medal and the Philippine Defense Ribbon.