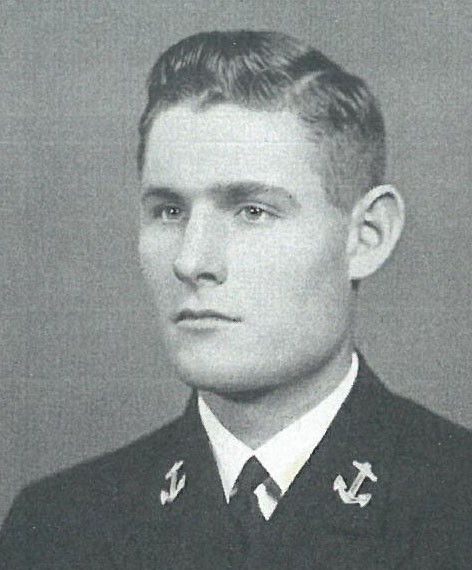 Frank Arland Andrews was born in Newport, Rhode Island, on 30 June 1921, son of Frank and Helen (Fallon) Andrews. He attended Rogers High School in Newport, prior to entering the US Naval Academy, Annapolis, Maryland, on appointment from his native state in 1938. Graduated with distinction, sixth in the Class of 1942, and commissioned Ensign on 19 December 1941 (course of instruction reduced to three years and seven months due to the National Emergency), he subsequently attained the rank of Captain, to date from 1 July 1961.

Following graduation from the Naval Academy in 1941, he remained there until April 1942 as an Instructor in Electrical Engineering. He next joined USS Duncan as First Lieutenant and for "outstanding heroism as Boat Officer...during rescue operations in the Pacific Area after the torpedoing of the USS Wasp by enemy Japanese forces on 15 September 1942..." he was awarded the Navy and Marine Corps Medal. The citation further states:

"Maneuvering his launch through the debris-littered sea, which was covered with flaming oil and ringing with the cries of the injured, Lieutenant (junior grade) Andrews and his crew worked unceasingly to rescue survivors from the stricken ship. Knowing that quantities of gasoline stored on the Wasp might explode at any moment, he nevertheless took his boat under the starboard bow of the flaming carrier and rescued personnel isolated in the forward gun galleys and on the flight deck and trapped by fire and exploding ammunition. Although menaced by bursting shells, (he) kept on with his work of rescue..."

Detached from the Duncan in December 1942, he had further duty afloat in USS Shubrick, and from January to March 1944 had instruction at the Naval Air Station, Dallas, Texas. After submarine training at the Submarine Base, New London, Connecticut, he reported in July 1944 on board USS Sennet, in which he participated in four war patrols. For outstanding services while attached to that submarine he was awarded the Bronze Star Medal, with Combat "V," and the Silver Star Medal. The citations follow in part:

Bronze Star Medal: "For meritorious service as Officer-of-the-Deck of the USS Sennet during the First War Patrol of that vessel in enemy Japanese-controlled waters in the vicinity of the Bonin Islands from 5 January to 31 January 1945. Skillfully maneuvering his ship at night, (he) rendered valuable assistance to his commanding officer in evading a salvo of torpedoes fired by the enemy and in assisting in the completion of a hazardous special assignment..."

Silver Star Medal: "For conspicuous gallantry and intrepidity as Assistant Approach Officer of the USS Sennet, during the Fourth War Patrol of that vessel in the Japan Sea from 1 July to 9 August 1945. Expertly handling attack problems throughout this hazardous mission, (he) rendered invaluable assistance to his commanding officer in conducting attacks to sink four hostile ships totaling over 24,000 tons despite severe enemy countermeasures..."

For a year, June 1946-June 1947, he had instruction at the Post-graduate School, Annapolis, Maryland, and after temporary duty in the Physics Section, Office of Naval Research, Navy Department, Washington, DC, reported in September 1947 for graduate studies in physics at Yale University, New Haven, Connecticut. He received his PH D from the latter in June 1949, then did research in physics at the Naval Research Laboratory, Washington, DC.

In June 1950 he joined USS Baya as Executive Officer and in March 1951 reported as Prospective Commanding Officer of USS K-1, building at the Electric Boat Division, General Dynamics Corporation, Groton, Connecticut. He assumed command of that anti-submarine submarine upon her commissioning, 10 November 1951. The K-1, the first of her kind when put into commission, is designed to seek out and destroy enemy submarines while both are submerged. He became Commanding Officer of USS Harder in September 1953 and in September 1954 was detached for duty as Submarine Program Officer at the David Taylor Model Basin, Carderock, Maryland.

He was Tactical Development Officer and Prospective Commanding Officer Instructor on the Staff of Commander Submarine Force, Pacific Fleet, from April 1956 to August 1957, after which he commanded Submarine Division SEVENTY-TWO. Returning to the Naval Academy in June 1958, he had duty as Executive Officer in the Electrical Engineering Department until August 1959, then became Head of the Science Department. In July 1962 he assumed command of Submarine Development Group TWO. While serving as such he was placed in charge of the search for USS Thresher, which sank about two hundred and twenty miles off Boston, Massachusetts, on 10 April 1963. "For meritorious service from April to September 1963 as Commander Task Group 89.7, later designed 89.9, which performed search operations in connection with the loss of the USS Thresher..." he received a Navy Commendation Medal. The citation further states:

"Exercising outstanding professional competence and sound judgment as the Commander of a Task Group which included various units of the US Navy, scientific and research vessels, and the deep-diving Research Vessel Trieste, Captain Andrews supervised submarine search operations of far greater scope and complexity that any heretofore undertaken by the United States Navy. The fact that the Task Group was successful in localizing the Thresher's resting place on the ocean bottom was in large measure the result of his outstanding technical skill and perseverance..."

He is also entitled to the Ribbon for, and a facsimile of the Navy Unit Commendation awarded the USS Trieste.