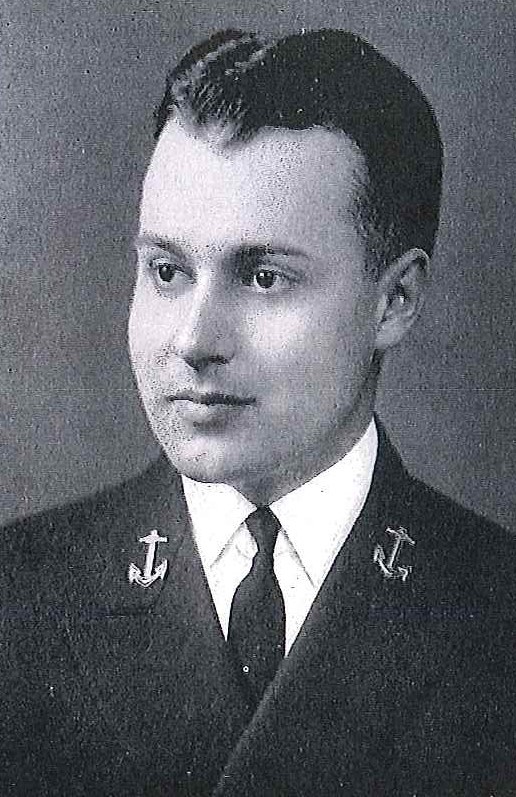 Edward Robinson Fickenscher, Jr., was born in Towson, Maryland, on September 26, 1918, son of Edward R. and Virginia Ady Burke Fickenscher. He attended Severna School, Severna Park, Maryland, and entered the US Naval Academy, Annapolis, Maryland, on June 29, 1936, on appointment from his native state. He was graduated with the degree of Bachelor of Science and commissioned Ensign in the US Navy on June 6, 1940, and through subsequent advancement attained the rank of Captain, to date from April 1, 1959.

After graduation from the Naval Academy in 1940, he was assigned to the USS Chester. He was serving as Fire Control Officer of that cruiser, operating in the Pacific, at the outbreak of World War II in December 1941, and continued that duty until August 1942. During that time he participated in the Marshall-Gilbert Islands raid in February and the battle of the Coral Sea in May 1942. When detached he reported to the US Naval Reserve Aviation Base, New Orleans, Louisiana, for pre-flight training, and during the next fourteen months had flight training at the Naval Air Station, Pensacola and Jacksonville, Florida, and Glenview, Illinois, and was designated Naval Aviator on May 3, 1943.

After earning his “Wings” he was ordered to Composite Squadron Four, and served as Executive Officer from November 1943, until June 1944, and as Commanding Officer until October 1945. Under his command the squadron, then based in the USS White Plains (CVE-66), participated in close air support during action at Saipan and Tinian, Marianas Islands, June 1 to August 2, 1943; Palau and Ulithi, Caroline Islands, in September of that year; and the Battle for Leyte Gulf in October. Composite Squadron Four trained with Commander Fleet Air, West Coast from December 1944 until June 1945 and, based on the USS Petrof Bay (CVE-80) for four months thereafter, was enroute to further combat at the end of hostilities in August 1945.

The USS White Plains, as a part of Task Unit 77.4.3, won the Presidential Unit Citation for heroic service as Samar, Philippine Islands, on October 25, 1944, and he was personally awarded the Distinguished Flying Cross and the Air Medal, with citations to follow:

Distinguished Flying Cross: “For heroism and extraordinary achievement in aerial flight as Pilot of a Fighter Plane in Fighting Squadron Four, attached to the USS White Plain, during action against enemy Japanese forces in that Battle for Leyte Gulf, October 25, 1944. Forming a flight composed of aircraft already airborne, (he) skillfully led a coordinated strafing, bombing and torpedo attack against units of the Japanese Fleet and despite intense enemy antiaircraft fire and hostile fighter interception, pressed home his attack to score six direct bomb hits on a leading enemy battleship…”

Air Medal: “For meritorious achievement in aerial flight as Pilot of a Torpedo Bomber in Torpedo Squadron Four, in operations against enemy Japanese forces during the Saipan Campaign, from June 15 to July 1, 1944. Fearless and aggressive as he engaged in a series of hazardous observation missions, (he) repeatedly defied enemy anti-aircraft fire and naval and artillery fire to execute daring low-level runs to obtain information of vital importance to the advance of our forces in this strategic area. In addition he launched an attack to sink an enemy-freighter in the harbor of Rota Island on June 24…”

He served during the post-war period (December 1945 to June 1948) as Assistant Aviation Ordnance Officer at the Naval Proving Ground, Dahlgren, Virginia, after which he had three years duty on the Staff of Commander Operational Development Force, as Air Tactics Officer. In August 1951he reported for instruction at the Naval War College, Newport, Rhode Island, where he was a student until June 1952, and for two years thereafter was assigned to the Office of the Chief of Naval Operations, Navy Department, Washington, DC, as Head, Air Warfare Section of the New Development and Operational Evaluation Division.

In July and August 1954 he attended the Naval School, All –Weather Flight, and the nest two months was a student in the Fleet Airborne Electronics Unit, Atlantic. He served on the Staff of Commander Anti-Submarine Force, Atlantic, from May 1956 until May 1957, when he joined the USS Valley Forge (CVS-45) as Executive Officer. In July 1958 he became Executive Officer of the Naval Air Station, Oceana, Virginia Beach, Virginia, and in April 1960 was detached for duty on the Staff of Commander Carrier Division Sixteen. He served for a year as Assistant Chief of Staff (Operations and Plans), and from December 1960 to February 1962 was Chief of Staff.

During the period March 1962 to May 1963 he commanded the USS Alstede (AF-48) and a month later assumed command of the USS Wasp (CVS-18). He was detached for duty as Chief of Staff and Aide to Commander Anti-Submarine Warfare Force, Atlantic in June 1964 and in September 1965 was assigned duty in the office of the Chief of Naval Operational, Navy Department.