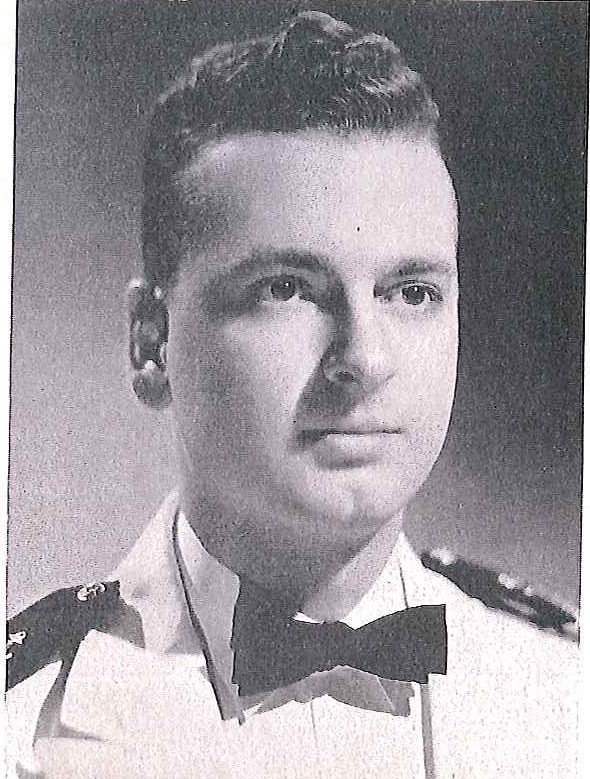 He was a member of the US Naval Reserve, from April 1935 to June 1937, before entering the US Naval Academy. He graduated thereafter as Ensign on February 7, 1941.

During two and a half years aboard USS San Francisco (CA-38), from March 1941 to August 1943, he participated in the defense of Pearl Harbor, air action off Bougainville, Salamoa-Lae raid, Guadalcanal, Tulagi, Cape, Esperance and Attu occupation.

Following Submarine School at New London, Conn., in January 1944, he was ordered to USS Queenfish (SS-393). He made all five war patrols aboard this submarine. Duty aboard USS Bushnell (AS-15) followed, from February 1946 to June 1946. He was then assigned to the Bureau of Ordnance until July 1948 when he was ordered to USS Tilefish (SS-307). From September 1949 until July 1950 he was Commanding Officer of USS Caiman (SS-323).

He attended the Armed Forces Staff College following promotion to the rank of Commander in July 1951. From February 1952 to June 1955 he served as Aide and Flag Secretary to the Commander-in-Chief, US Atlantic Fleet. Following this he became Operations Officer for Commander, Submarine Squadron ONE until June 1956. He commanded Submarine Division TWELVE for the next year and in June 1957 reported to the Naval Academy for duty as Executive Officer of the Physical Education Department. While serving here, in July 1959, he was promoted to Captain. He attended the National War College from August 1960 to June 1961, then assumed duties as Chief Staff Officer for Submarine Flotilla ONE, San Diego, Calif.