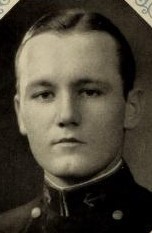 Commander Fahle was born on July 8, 1909, at St. Louis, Missouri the son of Mrs. Annabel (Schley) Fahle and the late Mr. Paul Fahle. He attended Central High School, Houston, Texas, before his appointment of the US Naval Academy, Annapolis, Maryland, from the Sixth District of Texas in 1927. Graduated and commissioned Ensign on June 4, 1931, he advanced progressively through the various grades to the rank of Commander to date from November 1, 1942.

Following graduation from the Academy in 1931, Commander Fahle was assigned to the USS Texas until June 1937, interspersed with duty aboard the USS Parrott from February 1934 until July 1936. He returned to the Naval Academy, Annapolis, Maryland, for postgraduate instruction, and upon completion of the course there, in May 1939, he had a month’s additional instruction at the Navy Boiler Factory, Navy Yard, Philadelphia, Pennsylvania. In July 1939, he reported aboard the USS Farragut as Engineer Officer and served in that capacity until December 1940.

Commander Fahle proceeded to the bath Iron Works Corporations, Bath, Maine, for duty in connection with fitting out the USS Ludlow and had aboard as Engineer Officer from her commissioning on March 5, 1941 until September 1942, when he assumed the duties of Executive Officer. Between January 1942 and August 1943, he commanded the USS Simpson on Atlantic convoy duty, after which he again had fitting on duty, this time with the USS Downes, at the Mare Island Navy Yard, Mare Island, California. He commanded the Downes from her commissioning on August 10, 1943 until February 1945, when he returned to the United States for duty in the Bureau of ships, Navy Department, Washington, D.C. One June 30, 1947, he assumed command of the USS Colonial, his present assignment.