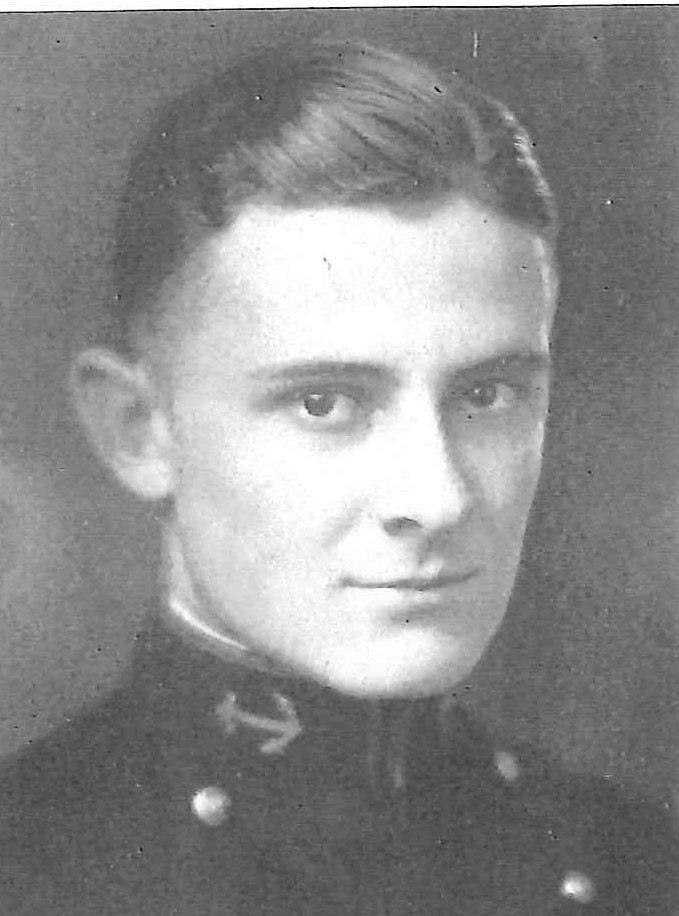 Born in Enid, Oklahoma, on December 28, 1904, Jackson Selover Champlin was appointed Midshipman from the Eighth Congressional District and entering the US Naval Academy, Annapolis, Maryland, on June 28, 1921. He was graduated and commissioned Ensign on June 3, 1925, and through subsequent promotions attained the rank of Captain on August 30, 1944, to date from July 20, 1943.

Following graduation from the Naval Academy in June 1925, he was assigned to USS Colorado for two years, and to USS Rochester for two years. He received a Letter of Commendation from the Secretary of the Navy for his performance of duty as Secondary Battery Control Officer aboard the Rochester during the 1928-1929 Gunnery Year Competition. Remaining at sea, he served aboard USS Detroit from May 29 to October 5, 1929. Ordered next to the New York Shipbuilding Company, at Camden, New Jersey, he assisted in fitting out USS Salt Lake City, and served aboard that cruiser from her commissioning, December 11, 1929 until June 25, 1932. During that period, the Salt Lake City operated as a unit of Cruiser Division 5, Scouting Force.

After a year’s instruction in General Line at the Postgraduate School, Annapolis, Maryland, he was placed in charge of the Fire-Control Instrument School at the Ford Instrument Company, Long Island, New York, from June 1933 until July 1934. He next had duty afloat aboard USS Pennsylvania, flagship of Commander in Chief, US Fleet. He was detached on May 31, 1937, and a month later returned to the Navy Academy for duty as an instructor in the Department of Ordnance and Gunnery.

On December 11, 1939 he recommissioned and assumed command of USS Haraden. He remained in command of that destroyer until February 3, 1940, shortly before her transfer to Great Britain under “lend-lease.” On March 1 he joined USS Colorado as Gunnery Officer. He remained aboard the battleship until August 1943, when he was designated Aide and Flag Secretary on the staff of Commander Cruiser Division during action against enemy Japanese forces in operations ranging from the Solomon Islands through the Gilberts, the Marshalls, the Marianas and culminating in the First Battle of the Philippines, during the period September 5, 1943 to August 18, 1944…”

“Tireless and skilled in discharging the responsibilities of this important duty, (he) participated in the capture and occupation of many heavily fortified Japanese-held islands during the steady advance of our forces westward toward the enemy’s home waters… Captain Champlin contributed materially to the effective surface support of vital invasions and to the damage inflicted on the Japanese by our naval forces…”

He reported to headquarters, Twelfth Naval District, in August 1944, and on October 7, 1944 was ordered to a shore assignment in the Bureau of Ordnance, Navy Department, Washington, DC, where he was placed in charge of research and development of naval guns, mounts and missile launchers. Detached in October 1948, he assumed command of USS Mt. Olympus, and continued in command of that Amphibious Force, Flagship, in the Atlantic, until December 1949. He next had thirty-three months’ duty in the Office of the Chief of Naval Operations, Navy Department, attained to the Division of International Affairs as Chief of Foreign Military Aid Matters.

From September 1951 to July 1953 he served as Sub Chief, Naval Mission to Brazil. The Brazilian Government awarded him the Order of Naval Merit, degree of Commander, which was presented personally by the Brazilian Chief of Naval Operations on October 9, 1953.

Since his return to the United States, he has been assigned to the staff of the Commander, Ninth Naval District.