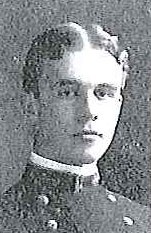 Rear Admiral Fenner was born on August 2, 1876, at Rochester, New York, the son of Edward B. Fenner and Mrs. Virginia M, (Taylor) Fenner. He attended the University of Rochester, Rochester, New York, for two years before his appointment to the Naval Academy, Annapolis, Maryland, from the Thirty-first District of New York in 1895. Graduated with distinction, fourth in his class, on January 28, 1899, he served his two years at sea, as a Passed Midshipman, as then required by law, before he was commissioned Ensign on January 28, 1901. He advanced progressively through the various grades to the rank of Rear Admiral to date from November 1, 1930. On July 6, 1940, he was transferred to the Retired List of the U.S. Navy.

Prior to graduation from the Academy, Rear Admiral Fenner had service as a Midshipman aboard USS New York during the Spanish American War, participating in the Blockade of Santiago and the Battle of Santiago, until August 22, 1898, when he returned to the Academy to complete his instruction. Following graduation in 1899, he had duty in USS Massachusetts until October of that year, when he joined USS Brooklyn, which was o duty in the Philippines during the Philippine Insurrection and in North China the Boxer Uprising. On April 10, 1901, he was transferred to USS Kentucky, and remained aboard that battleship until May 1901, after which he had month’s duty at Olongapo, Manila, Philippine Islands. He returned to sea duty in USS Culgoa in June 1901, and continued sea duty until July 1904, in USS Albany, USS San Francisco and USS Olympia. He was serving in the latter as Watch and Division Officer in Panama during the revolution which resulted in the establishment of the Republic of Panama.

Rear Admiral Fenner had temporary duty aboard USS Kearsarge until August 1904, and the following month reported to the Naval Academy, Annapolis, Maryland, as an Instructor in the Departments of Navigation and Mechanics, in which capacity he remained until September 1906. Detached from the Academy, and after four month’s duty on USS Newark, he reported for pre-commissioning duty aboard USS Milwaukee, and when she was placed in commission on December 11, 1906, he cruised in her until April 1908, when he was transferred to USS Wisconsin. On March 14, 1909, he assumed the duties or Ordnance Officer aboard that battleship and served in that assignment for six months, after which he was detached and ordered to the Naval Academy for another tour of duty as an Instructor there.

In June 1912, Rear Admiral Fenner reported aboard USS Minnesota as Navigator and served in that ship until September of that year, when had temporary additional duty as Executive Officer aboard USS Wisconsin. He rejoined USS Minnesota in October 1912, and served in her until March 1915, when he assumed command of USS Vulcan. He returned to the Naval Academy in August 1915, serving on the staff there until June 1918, when he was detached with orders to command USS Denver. He served in the Denver during World War I, operating on Atlantic convoy duty, and in October 1920, was detached for duty in attendance upon the course of instruction at the Naval War College, Newport, Rhode Island.

Upon completion of the course at the Naval War College in November 1921, Rear Admiral Fenner reported to the Bureau of Navigation, Navy Department, Washington, D.C., for duty. He served in the Bureau until ordered to Manila, Philippine Islands and upon arrival there in October 1923, he reported a Chief of Staff to the Commander in Chief, Asiatic Fleet. On April 25, 1924, he had temporary additional duty at Chungking, China, in connection with the inspection of the Yangtze Patrol Force. Relived of the additional duty on May 29, 1924, he continued to serve in his major assignment until October 1925, when he was detached and ordered to return to the United States. He reported on November 16, 1925, to the Office of the Chief of Naval Operations, Navy Department, Washington, D.C., where he served until June 1928. He commanded the US Mississippi, until June 1930, after which he reported a Commandant Sixteenth Naval District, Cavite, Philippine Islands, with additional duty as Commandant of the Navy Yard there.

Rear Admiral Fenner had the Philippine Campaign Medal; the Spanish Campaign Medal; the China Service Medal; the Mexican Service Medal; the Victory Medal; Escort Clasp; the American Defense Service Medal and Special Letter of Commendation, dated August 13, 1919 and November 11, 1920, from the War Department and the Navy Department, respectively. He also awarded the Medal and Star of a Grand Officer of the Imperial Order from the Cambodian Kingdom, which was conferred on him by Governor-General Pierre Pasquier of French Indo-China on the occasion of his visits to the Philippines while Rear Admiral Fenner was Commandant Sixteenth Naval District.