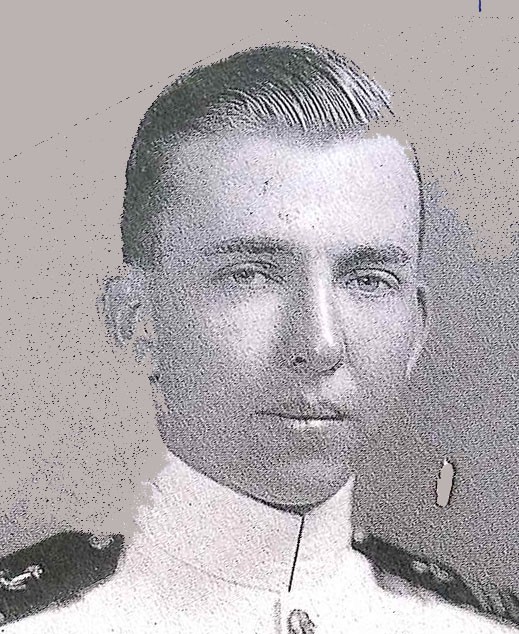 John Anthony Fidel was born in Telluride, Colorado, on December 5, 1956, son of Anthony F. and Anne Bagley (Allen) Fidel. He attended East Denver (Colorado) High School; Casper (Wyoming) High School, and the US Naval Academy Preparatory School, Annapolis, Maryland, prior to his appointment to the US Naval Academy from the State of Wyoming in 1935. While a Midshipman he participated in Battalion track and tennis and was on the Staff of the “Lucky Bag.” Graduated and commissioned Ensign on June 1, 1939, he subsequently advanced in rank, attaining that of Captain, to date from May 1, 1958.

Following graduation from the Naval Academy in 1939, he joined USS Oklahoma (BB-37) and in May 1940 transferred to USS Somers (DD-381), to serve as Communications Officer, First Lieutenant, Gunnery Officer, and Engineering Officer. From June 1942 until April 1943 he had flight training at the Naval Air Stations, New Orleans, Louisiana, and Pensacola, Florida and on May 14, 1943 was designated Naval Aviator. Ordered to the Naval Air Station, Fort Lauderdale, Florida, he had duty as a Flight Instructor until December 1943.

From December 1944 to September 1946 he was Commanding Officer of Torpedo Squadron Eleven, attached to USS Hornet (CV-12). “For heroism and extraordinary achievement…. as Commanding Officer, Torpedo Squadron Eleven…in operations against an enemy Japanese convoy off Phan-Rang, French Indo China, January 9, 1945…” he was awarded a Gold Star in lieu of the Second Distinguished Flying Cross. The citation continues in part: “Despite moderate but accurate antiaircraft fire, (he) led a eight-plane attack against the enemy convoy, personally scoring a torpedo hit on a small enemy tanker and contributed to the destruction of a large enemy tanker and a medium cargo ship, and to the strafing of s destroyer escort which exploded…”

He is also entitled to a facsimile of and the Ribbon for, the Presidential Unit Citation awarded USS Hornet.

In September 1946 he joined the Naval Reserve Officers Training Corps Unit at the University of Washington, Seattle, Washington, as Assistant Professor of Naval Science, and from June 1947 to May 1948 was a student at the Naval War College, Newport, Rhode Island. He was next assigned to the Staff of Commander Fleet Logistics Support Wing, Atlantic, as Administrative Assistant, and in October 1948 assumed command of Fleet Aircraft Service Squadron One Hundred Nineteen.

He reported in April 1950 as Operations Officer at the Naval Air Station, Jacksonville, Florida, and during the period January to June 1952 was enrolled as a student in the Senior Course at the Marine Corps School, Quantico, Virginia. The next month he assumed command of Tactical Air Control Squadron Three, and in July 1953 transferred to Tactical Air Control Group One to serve as Chief Staff Officer.

From july 1954 to June 1956 he was Assistant Head of the Air Branch in the Office of the Chief of Naval Operations, Navy Department, Washington, DC, then reported as Executive Officer on board USS Randolph (CV-15). In August 1957 h joined the Staff of the Commander in Chief, US Atlantic Fleet as Head of the Guided Missiles Branch and in July 1959 was assigned to the Special Projects Branch, Joint Staff, Joint Chiefs of Staff, Washington, DC.

In September 1961 he assumed command of USS Cimarron (AO-22), and in October 1962 transferred to command USS Valley Forge (LHP-8). He became Commander Fleet Activities Command, Washington, DC, in October 1963 and in June 1964 returned to the Office of the Chief of Naval Operations, where he was Director of the Flight Operations Division. In February 1967 he reported for instruction in the Italian Language at the Defense Language Institute, East Coast, Washington, DC, and now is under orders to assume command of the Naval Support Activity, Naples, Italy.