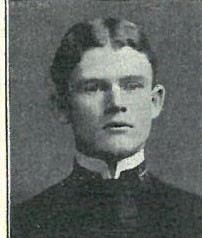 Harry Alexander Baldridge was born in Albany, New York, on February 22, 1880. He entered the Naval Academy from Missouri in 1898, was graduated in 1902 and commissioned Ensign in July 1904, having performed two years sea duty then required by law before commissioning. He advanced in grade until promoted to Captain on September 16, 1925, and was retired in that rank on February 1, 1932, being physically incapacitated as the result of an incident of the service. On March 23, 1950, he was promoted to Rear Admiral on the Retired List for performance of duty in actual combat.

His first duty after graduation in 1902 was on Asiatic Station. Arriving at Cavite, Philippine Islands, in USS Solace, he served consecutively in USS New York and USS Kentucky. He returned to the United States in November 1908, with orders to duty in the Bureau of Navigation, Navy Department, Washington, DC, and later was assistant director of target practice and engineering competitions, Navy Department. In May 1911, he joined  USS Minnesota to serve as Ordnance Officer until May 1913, when he was transferred to USS California with duty as Fleet Ordnance Officer on the staff of Commander in Chief, Pacific Fleet. In the spring of 1914 he became Aide and Fleet Gunnery Officer on the staff of Commander in Chief, Asiatic Fleet, USS Saratoga, flagship.

In July 1915 he returned to the Bureau of Navigation, Navy Department, and served until October 1917 as Director of Commissioned Personnel. On November 1 of that year he reported to the Navy Yard, Philadelphia, and after duty in charge of fitting out USS Stockton, he assumed command of that vessel on her commissioning on November 26. He was awarded the Navy Cross for “distinguished service in the line of his profession as Commanding Officer of the USS Stockton, engaged in the important, exacting and hazardous duty of patrolling the waters infested with enemy submarines and mines, in escorting and protecting vitally important convoys of troops and supplies through these waters, and in offensive and defensive action, vigorously and unremittingly prosecuted, against all forms of enemy naval activity.”

He continued command of the Stockton until December 1919, with additional duty in command of Destroyer Division 20. He fitted out  USS Preble at the Bath Iron Works, Bath, Maine, during the next few months, assumed command when she was commissioned on March 19, 1920, and continued additional duty as Commander Destroyer Division 20, until detached from that assignment on May 19, 1920.

He attended the senior course at the Naval War College, Newport, Rhode Island, in 1920-21, and served on the staff for two years thereafter. In June 1923 he reported as Executive Officer of USS Tennessee and, following that duty, assumed command on June 20, 1924, of USS Melville. Three months later he became Head of the Department of Seamanship and Flight Tactics at the Naval Academy, serving in that capacity from September 1924, until January 1928.

After command of USS Rochester from February 1928 until June 1930, he was designated Director of Naval Intelligence, Office of the Chief of Naval Operations, Navy Department, where he remained until June 1931, and was transferred to the Retired List of the Navy on February 1, 1932.

Rear Admiral Baldridge has been Curator of the Naval Academy Museum since December 11, 1937. He is an authority on Naval History and Naval Art, and as director of the Museum has been responsible for the acquisition of many of its most valuable collections. In December 1945 he received as Letter of Commendation with authorization to wear the Commendation Ribbon, from the Secretary of the Navy for “outstanding service as Curator of the Naval Academy Museum from December 11, 1937 to December 1945…”

In addition to the Navy Cross and the Commendation Ribbon, he has the Spanish Campaign Medal Cuban Pacification Medal (USS Kentucky), Victory Medal, Destroyer Clasp (USS Stockton); Second Nicaraguan Campaign Medal (USS Rochester); American Defense Service Medal, American Campaign Medal, and the World War II Victory Medal. He has also been awarded the Order of the Crown, grade of Officer, from the Government of Belgium, 1919; and the Medal of Merit, silver star and diploma, from the Government Nicaragua, 1930.