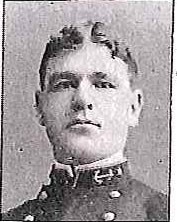 Joseph Rollie Defrees was born in Smithboro, Illinois, on June 12, 1876, son of Newton T. and Anna M. (Johnson) Defrees. He was appointed to the US Naval Academy, Annapolis, Maryland, from the Eighteenth District of Illinois in 1896. Graduated on June 8, 1900, he served the two years at sea, before he was commissioned Ensign in 1902 in  USS Constellation and Philadelphia. He subsequently advanced in rank to that of Rear Admiral, to date from April 5, 1933.

After receiving his commission in 1902, he had consecutive duty in USS Boston, Mohican and Decatur and in 1905 assumed command of USS Chauncey. In 1906 he joined USS Vesuvius and became Commanding Officer of that vessel in 1907. Later that year, he was assigned to the Navy Yard, Washington, DC, where he remained until 1909.

He next had duty in USS Michigan and in 1910 transferred to USS Mississippi to serve as Ordnance Officer. In 1912 he reported as First Lieutenant on board USS Ohio and later that year was assigned to the Bureau of Ordnance, Navy Department, Washington, DC. He remained there until 1916, then became Navigator on board USS Nevada. In 1917 he was on special duty with Rear Admiral Albert Gleaves, US Navy, in charge of the Cruiser and Transport Service. Later that year, he was in charge of fitting out USS Neckar and assumed command upon her commissioning on September 5, 1917. The next day her name was changed to USS Antigone. He was awarded the Navy Cross and cited as follows:

“For distinguished service in the line of his profession as Commanding Officer of the USS Antigone, engaged in the important, exacting and hazardous duty of transporting and escorting troops and supplies to European ports through waters infested with enemy submarine and mines.”

He also received a special letter of commendation from the War Department.

During 1919 and 1920 he was in command of the Naval Experimental Station, New London, Connecticut, with additional duty in command of the Submarine Detachment, Atlantic Fleet. In 1921 he was assigned to the Naval Gun Factory, Washington, Navy Yard and from 1923 to 1925 served as Commander Submarine Division, Asiatic Fleet, with additional duty as Commander of the Submarine Base, Cavite, Philippine Islands. He completed the course of instruction at the Army Industrial College, Washington, DC in June 1925, after which he served in the Bureau of Engineering, Navy Department, until December 1927.

He next commanded USS Texas and from 1929 to 1931 was Inspector of Ordnance in Charge of the Naval Torpedo Station, Newport, Rhode Island. He completed the course of instruction at the Naval War College, Newport, Rhode Island, in 1932 and in June of that year reported as Chief of Staff to the Commander of the Scouting Force. In December 1933 he became Commandant of the Washington, DC Navy Yard. He was detached from that duty in June 1936, then assumed command of the Submarine Force, United States Fleet. He was Director of Shore Establishments, Navy Department, from November 15, 1937 until June 1, 1939, after which he served as Commandant of the Eleventh Naval District and Commander of the Naval Operating Base, San Diego, California. He was transferred to the Retired List of the US Navy on July 1, 1940.

He returned to active duty in December 1941 and was assigned as Inspector of Naval Material in the Los Angeles District, with headquarters in Vernon, California. In June 1945 he was again released from active duty.