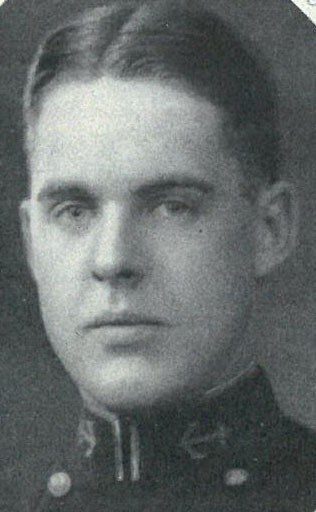 Jay Stephens Anderson was born in Magdalena, Sonora, Mexico, on 18 May 1908, son of Glen and Lucu (Stephens) Anderson.  His experience with the US Navy came early, when in 1914 at the age of six, his family tried to leave the City of Vera Cruz, during the Mexican Revolution.  In his words, "The United States Fleet was a comforting spectacle in Vera Cruz Harboe."  He, his mother and sister were evacuated as Brazilian refugees; however, his father was held captive by bandits in the interior of Mexico, later escaping with several other American mining engineers. His family spent the succeeding three years in Ontario, Canada, and then returned to Montana, their homeland.

He attended the Montana School of Mines at Butte, prior to his appointment to the US Naval Academy, Annapolis, Maryland, from his native state in 1927. As Midshipman, he was President of the Musical Clubs and a member of the Naval Academy Ten (the Naval Academy dance orchestra). Graduated and commissioned Ensign on 4 June 1931, he subsequently advanced in rank, attaining that of Captain, to date from 1 July 1950.

Following graduation from the Naval Academy in 1931, he was assigned for a month to the Naval Air Station, San Diego, California, and in August joined USS Pennsylvania. Detached from that battleship in May 1932, he was ordered to the Naval Air Station, Pensacola, Florida from February 1933 to March 1934 for flight training. He served in USS Nevada, after which he returned to the Pensacola Air Station for additional training. On 27 February 1935 he wae designated Naval Aviator.

In June 1935 he joined Torpedo Squadron TWO, based on USS Saratoga, and during August of the next year assisted in fitting out Patrol Squadron FIFTEEN. That squadron was commissioned on 1 September 1936, and he served with it, attached to USS Owl until January 1938, when he transferred to Patrol Squadron FOUR, operating with Aircraft Squadrons, Scouting Fleet. He reported in October 1940 as Operations Officer of Utility Squadron FOUR on duty in the Atlantic area, and in December 1941 was assigned to the Naval Air Station, Dutch Harbor, Alaska, as Operations Officer. For outstanding services in that capacity, he was commended by Commander Task Force EIGHT for duty during the Aleutians Campaign in which he provided services to squadrons of Task Force EIGHT.

Between June 1949 and July 1951 he was assigned to the Office of the Chief of Naval Operations, Navy Department, Washington, DC, after which he was in command of the Naval Station, Adak, Alaska. In September 1952 he assumed command of USS Suisun and in August 1953, was ordered detached from that command for duty as Command in Officer of the Naval Air Station, New York, Floyd Bennett Field, Brooklyn.