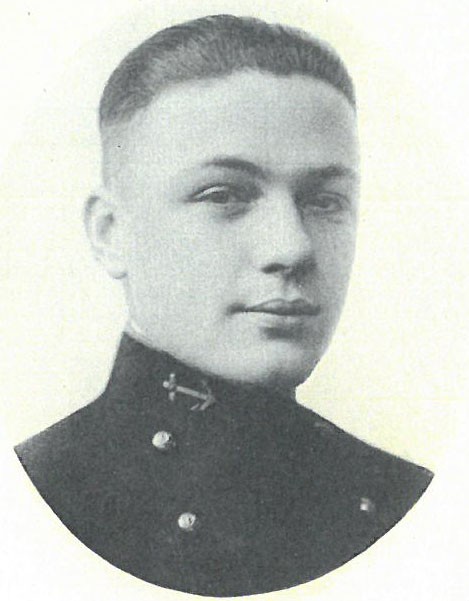 Fort Hammond Callahan was born in Bainbridge, Georgia, on November 29, 1899, son of Andrew J. and Caroline (Fort) Callahan. He attended Bainbridge High School and Marion Military Institute, Marion, Alabama, before entering the US Naval Academy, Annapolis, Maryland from the Second District of his native state in 1917. Graduated and commissioned Ensign on June 3, 1921, he subsequently advanced, attaining the rank of Captain, to date from July 10, 1943. He was transferred to the Retired List of the US Navy on June 30, 1952, and advanced to the rank of rear Admiral on the basis of a combat award.

Following graduation from the Naval academy in 1921, he joined USS New York and in July 1923 transferred to USS Milwaukee. While aboard the latter he visited, during her “shakedown cruise’ most of the South Sea Islands, many of which had never before been visited by American ships, exploring a number of uninhabited islands, and in 1924 was a member of the landing force of the Milwaukee ashore at Tequcigalpa, Honduras, during the revolution there. Detached from the Milwaukee in July 1924, he then had further sea duty until December of that year in USS Breck.

Ordered to the Submarine Base, New London, Connecticut, he had submarine training in  USS Chewink and upon completing his instruction in June 1925 joined USS S-26 the next month. Transferred to USS S-7 in April 1927 he continued duty in that submarine for two months, when he was detached to report for instruction in communication engineering at the Postgraduate School, Annapolis Maryland. During July and August 1928 he had further instruction in the Office of Naval Communications and the Bureau of Engineering, Navy Department, Washington, DC, and in June 1929 completed the course at Harvard University, Cambridge, Massachusetts, receiving the degree of Master of Science.

In September 1929 he joined USS Colorado and in June 1932 was detached for duty as an Instructor in the Department of Electrical Engineering at the Naval Academy. He remained there until May 1935 and the next month reported at Communications Officer aboard USS Tuscaloosa. He became District Communication Officer, Seventh Naval District; as Officer in Charge of the Naval Station, Key West, and further additional duty during May and June 1938 as Instructor of Division ONE. Naval Reserve, Seventh Naval District.

“Exercising ingenuity and resourcefulness in discharge of his vital assignment, (he) contributed notably to the success of the desperate delaying action of our forces on Corregidor by the maintenance of efficient communications under almost continuous enemy bombardment of facilities. His courageous leadership under the most trying conditions and his devotion to duty reflect great credit upon Lieutenant Commander Callahan and the United States Naval Service.”

He was taken a prisoner of war by the Japanese upon the fall of Corregidor on May 5, 1942 and in September 1945 was liberated and returned to the United States for repatriation. From January 1946 to August 1948 he was Assistant Chief of Staff for Operations on the staff of the Commandant Seventh Naval District with headquarters in Key West, Florida. Following duty as a member of the Sub-Committee of the Committee on Facilities and Services at Atlanta, Georgia, he reported, in December 1949, as a member of the Southeast area Joint Committee of the Management Committee, Office of the Secretary of defense with headquarters in Atlanta, Georgia.

He severed with the Navy Department Management Survey, Officer of the Under Secretary of Navy, between February and July 1950, when he became Planning and War Plans Officer on the staff of the Commandant Twelfth Naval District, San Francisco, California. He remained there until relieved of all active duty pending his retirement on June 30, 1952.