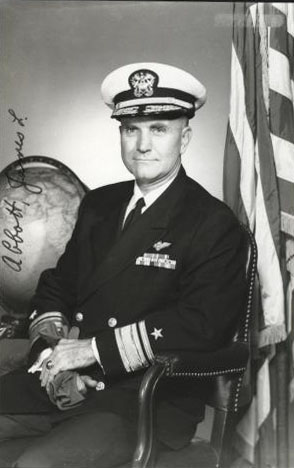 James Lloyd Abbot, Jr., was born in Mobile, Alabama, on 26 June 1918, son of Captain J. Lloyd Abbot, USN, Retired and Mrs. (Helen Buck Taylor) Abbot. He attended Murphy High School, Mobile, Alabama and Spring Hill College, also in Mobile, for one year, prior to entering the US Naval Academy, Annapolis, Maryland, on appointment from his native state in 1935. Graduated and commissioned Ensign on 1 June 1939, he subsequently advanced in rank to that of Rear Admiral, to date from 30 May 1967.

Following graduation from the Naval Academy in 1939, he reported on board the USS Enterprise (CV-6) and in September of that year transferred to the USS Gilmer (DD-233). Detached from that destroyer in March 1941, he had flight training at the Naval Air Stations, Pensacola, Florida, and on 18 August 1941 was designated Naval Aviator. He next served as Officer in Charge of Students with the Advance Carrier Training Group, Pacific and in November 1942 joined Scouting Squadron 1-D14. In March 1943 he assumed command of Scouting Squadron SIXTY-SIX and for outstanding service while commanding that Squadron was awarded the Air Medal and cited as follows:

'For meritorious achievement...in action against enemy Japanese forces in the vicinity of the Gilbert and Marshall Islands from November 1943 through January 1944. Engaged in numerous search, convoy, reconnaissance, and patrol missions over enemy waters during this period, (he) contributed materially to the accomplishment of his squadron...'

In March 1944, he joined the Staff of the Chief of Naval Air Training, with headquarters at the Naval Air Station, Pensacola, Florida, and while there had eighteen months as Engineering Training Officer and eleven months as Personnel Officer. He received the Navy Commendation Medal with the following citation: 'For outstanding and meritorious contributions to the cause of Naval Aviation while serving as Engineering Training Officer on the Staff of the Naval Air Training from April 18, 1944 to August 31, 1945. During that period, his zealous interest, energetic leadership and keen initiative in developing and organizing a standardized plan of instruction for all engineering training conducted within the Naval Air Training Command was reflected in the proud record of Naval Aviation in the war...'

During the period August to November 1946, he had fighter refresher training at the Naval Air Station, Miami, Florida, after which he commanded Fighter Squadron FORTY-TWO. He reported in January 1949 as Head of Program Requirements in the Office of the Chief of Naval Operations, Navy Department, Washington, DC, where he remained until January 1951, then assumed command of Utility Squadron FOUR. From August 1952 until February 1953 he was a student at the Armed Forces Staff College, Norfolk, Virginia, after which he served as Plans and Operations Officer on the Staff of Naval Air Basic Training, with headquarters at the Naval Air Station, Pensacola.

In July 1963 he reported for instruction at the National War College, Washington, DC, and while there was awarded the degree of Master of Science in Business Administration from George Washington University. In August 1964 he was assigned to the Office of the Chief of Naval Operations, Navy Department, where he served as Director for Mid-Range Studies until June 1965, then as Deputy Director of Naval Warfare Analyses and from August 1966 as Director of Naval Warfare Analyses. In February 1967 he assumed command of the US Naval Support Force, Antarctica, with headquarters in Washington, DC, and 'for exceptionally meritorious service from February 1967 to June 1969...' in that capacity was awarded the Legion of Merit. The citation further reads in part:

'Commanding and directing all of the forces participating in Operation DEEP FREEZE, Rear Admiral Abbot, the senior United States Representative in Antarctica, was charged with the responsibility of insuring the success and safety of all United States operations on that continent...Under his command during DEEP FREEZE 69, a ship penetration was made far into the ice-covered Weddell Sea for a first oceanographic study of that significant area. In furtherance of the spirit of the Antarctic Treaty, an international expedition was flown across Antarctica and put in the field in the unexplored Krual Mountains for the purpose of conducting a geological reconnaissance of the region. Palmer Station, which was successfully completed and opened by Rear Admiral Abbot on schedule in 1968, marks the first permanent United States presence in the Antarctica Peninsula...'

In July 1969, he assumed command of Carrier Division SIXTEEN (redesignated on 1 August 1970, Anti-Submarine Warfare Group FOUR) and in November 1970 became Inspector General of the US Atlantic Fleet. He was awarded a Gold Star in lieu of the Second Legion of Merit 'For exceptionally meritorious conduct...' in that capacity. The citation continues in part '...Exercising a high degree of leadership, sound judgment and planning and managerial abilities, (he) contributed materially to the accomplishment of the mission of the Commander in Chief, U.S. Atlantic Fleet...' On 1 July 1972 he was transferred to the Retired List of the US Navy. He returned to active duty in November 1972 to fill the new billet of Director of Educational Development on the Staff of the Chief of Naval Training, with headquarters Naval Air Station, Pensacola, Florida. Rear Admiral Abbot had additional duty as Deputy Director of Naval Education and Training, Office of the Chief of Naval Operations, Navy Department until his retirement in April 1974.

Rear Admiral Abbot has written articles which have appeared in the Saturday Evening Post, Naval Institute Proceedings and Shipmate Magazine.