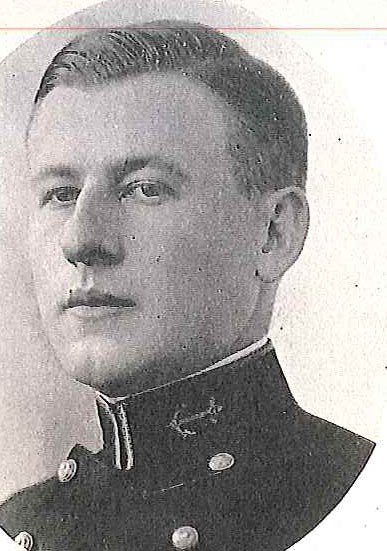 Raymond Dorsey Edwards was born in North McAlester, Oklahoma, on April 20, 1898. He entered the US Naval Academy, Annapolis, Maryland, on appointment from the Second District of Missouri in 1917. Graduated and commissioned Ensign on June 3, 1921, he subsequently advanced in rank to that of Captain, to date from July 10, 1943. On June 30, 1952 he was transferred to the Retired List of the US Navy and was advanced to the rank of Rear Admiral on the basis of combat awards.

Following graduation from the Naval Academy in 1921, he joined USS Texas and in April 1924 transferred to USS Chase. Detached from the latter in June 1924, he next had training in USS Chewink, training ship at the Submarine Base, New London, Connecticut. From December 1924 to December 1927 he served in SS S-18, after which he continued duty afloat in USS Maury.

Assigned in September 1928 to the Naval Training Station, Naval Operating Base, Hampton Roads, Virginia, he remained there until May 1930, then joined USS Luce. He was assigned to USS Marblehead during January and February 1931, then reported on board USS Colorado. Detached from that battleship in May 1933, he had duty at the Naval Ammunition Depot, St. Juliens Creek, Virginia, and in May 1935 reported as Executive Officer of USS Babbitt. In June 1936 he assumed command of that destroyer and from September 1937 to May 1938 was Navigator on board USS Vega.

In June 1938 he was assigned to the Branch Hydrographic Office, New Orleans, Louisiana, where he remained until June 1941, after which he had duty in connection with the conversion of the Steamship Quaker at the Bethlehem Steel Company, East Boston, Massachusetts. He assumed command of that vessel (renamed USS Miantonomah) upon her commissioning on November 13, 1941. “For meritorious achievement. . . during operations off the coast of Northwest Africa in November 1942. . .” he was awarded the Bronze Star Medal with Combat “V”. The citation further states in part:

“Undaunted by the nearness of hostile surface fire and by the know presence of enemy mines in enemy-controlled waters, (he) handledhis ship with skill and determination to supervise the laying of an extensive minefield in record time without incurring casualties in personnel or damage to his ship. His expert technical ability, outstanding initiative and leadership were contributing factors in the coverage rendered Allied shipping from subsequent submarine attacks by the enemy. . .”

Detached from command of the Miantonomah in September 1943, he joined the Staff of Commander Service Squadron, South Pacific Force and received a Letter of Commendation, with authoriization to wear the Commendation Ribbon, from the Commander in Chief, US Pacific Fleet. The citation follows in part: “For meritorious and efficient performance of duty while serving as Type Commander, Minecraft and Anti-Submarine Vessels on the Staff of the Commander Service Squadron, South Pacific Force from November 1, 1943 to June 20, 1944. During this period, Commander Edwards displayed exceptional ability in the establishment and expansion of minecraft and anti-submarine maintenance activities in the South Pacific area. He was responsible for the administration of mine sweeper and patrol craft, the laying and sweeping of mine fields and the planning of these activities in connection with amphibious operations. Under his thorough training program, his department qualified a large number of offficers to meet the demands of new construction thereby insuring the operating efficiency of those ships. His technical knowledge and skill contributed materially to the success of our forces in the South Pacific campaign. . .”

“For exceptionally meritorious conduct. . .during operations against enemy Japanese forces in the Pacific War Area from May 13 to August 1945. By his zealous attention to detail and anticipation of the needs of Minecraft in the forward area, Captain Edwards ably supported the efficient operations of the many small ships in the fulfillment of their numerous hazardous missions. Acting as a personal link to other vitally important logistics and administrative commands in the rear, he constantly improved the service which his command furnished minecraft and thereby contributed materially to the successful completion of all minecraft’s assigned missions. . .”

In September 1946 he reported as General Inspector in the First Naval District, headquartered in Boston, Massachusetts, and in September 1949 became Professor of Naval Science, Naval Reserve Officers Training Corps Unit at Marquette University, Milwaukee, Wisconsin. He was serving as such when relieved of active duty pending his retirement, effective June 30, 1952.