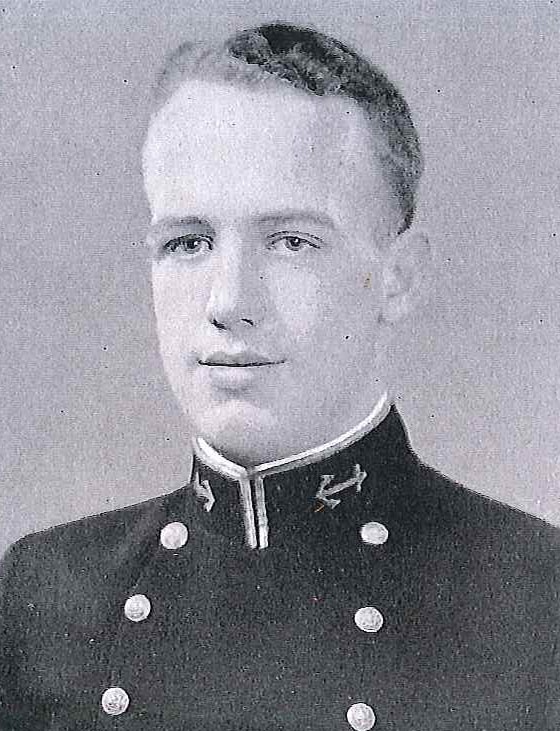 William Thomas Easton was born in Salt Lake City, Utah, on May 30, 1905, son of Colonel A.T. Easton, USA, and Mrs. (Harriette Andrews) Easton, both now deceased. He was graduated from Harvard Military School in Los Angeles, California, and attended the University of Southern California, also in Los Angeles, before his appointment to the US Naval Academy from the Tenth District of California in 1925. As a Midshipman he was active in athletics, playing football three years, a member of the track team three years, and a member of the swimming and water polo teams two years. He was graduated and commissioned Ensign on June 6, 1929, and through subsequent promotions attained the rank of Captain, to date from March 30, 1945.

After graduation in 1929, he served in the battleship Tennessee until May 1930, when he reported to the Naval Air Station, Pensacola, Florida, for flight training. He was designated naval aviator March 9, 1931, and from May 1931 until June 1934 was squadron navigator and liaison plane pilot of Fighting Squadron 6, based on the aircraft carrier Saratoga. During the next two years he served successively as squadron Navigator and Operations Officer of Patrol Squadron 1, attached to Fleet Air Base, Pearl Harbor, T H.

In June 1936 he rejoined Fighting Squadron 6 of the Saratoga to serve for a year as assistant flight officer. From June 1937 until February 1938 he was Personnel Officer of Torpedo Squadron 5, based on the carrier Yorktown. In February 1938 he was ordered to duty in connection with fitting out the aviation unit of USS Boise, and served as Senior Aviator aboard that cruiser from her commissioning, August 12, 1938 until June 1939. From July of that year until November 1942 he was on duty at the Naval Air Station, Anacostia, DC, and he assigned duties as personal pilot for the late Secretary of the Navy, the Honorable Frank Knox.

Reporting in December 1942 to Commander Fleet Air Wing 14, he was assigned duty as Prospective Commanding Officer of Photographic Squadron 2. He commanded that squadron, later redesignated Photographic squadron [sic] 3, until March 1943, when he was detached to report to Commander, Fleet Air, West Coast, to assist in fitting out Bombing Squadron 103, as Commanding Officer. Detached from that assignment in August 1943, he was ordered too duty as Chief Staff Officer and Operations Officer on the staff of the Commander, Fleet Air Wing 7. For meritorious service in that assignment during operations in the Bay of Biscay and the invasion of occupied France, he was awarded the Legion of Merit. The citation follows in part:

"…Commander Easton rendered invaluable assistance in the planning and operations against the German Submarine menace during a period of intense enemy submarine activity thereby contributing materially to the neutralization of the enemy menace resulting in the successful passage of allied convoys to the United Kingdom, Russia, and occupied France. The efficiency, professional skill and constant devotion to duty displayed on all occasions by Commander Easton were in keeping with the highest traditions of the United States naval service."

From October 18, 1948 to July 12, 1949 he was Commanding Officer of USS Valcour (AVP 55). He then reported as a student at the Naval War College, Newport, Rhode Island, and after completing the course remained there from July 1950 until March 29, 1952, as a member of the staff. On April 12, 1952 he was ordered to duty as Fleet Plans and Operations Officer on the staff of Commander SIXTH Fleet, operating in the Mediterranean Area. On May 18, 1954 he was detached with orders to command USS Intrepid (CVA 11), his present command.