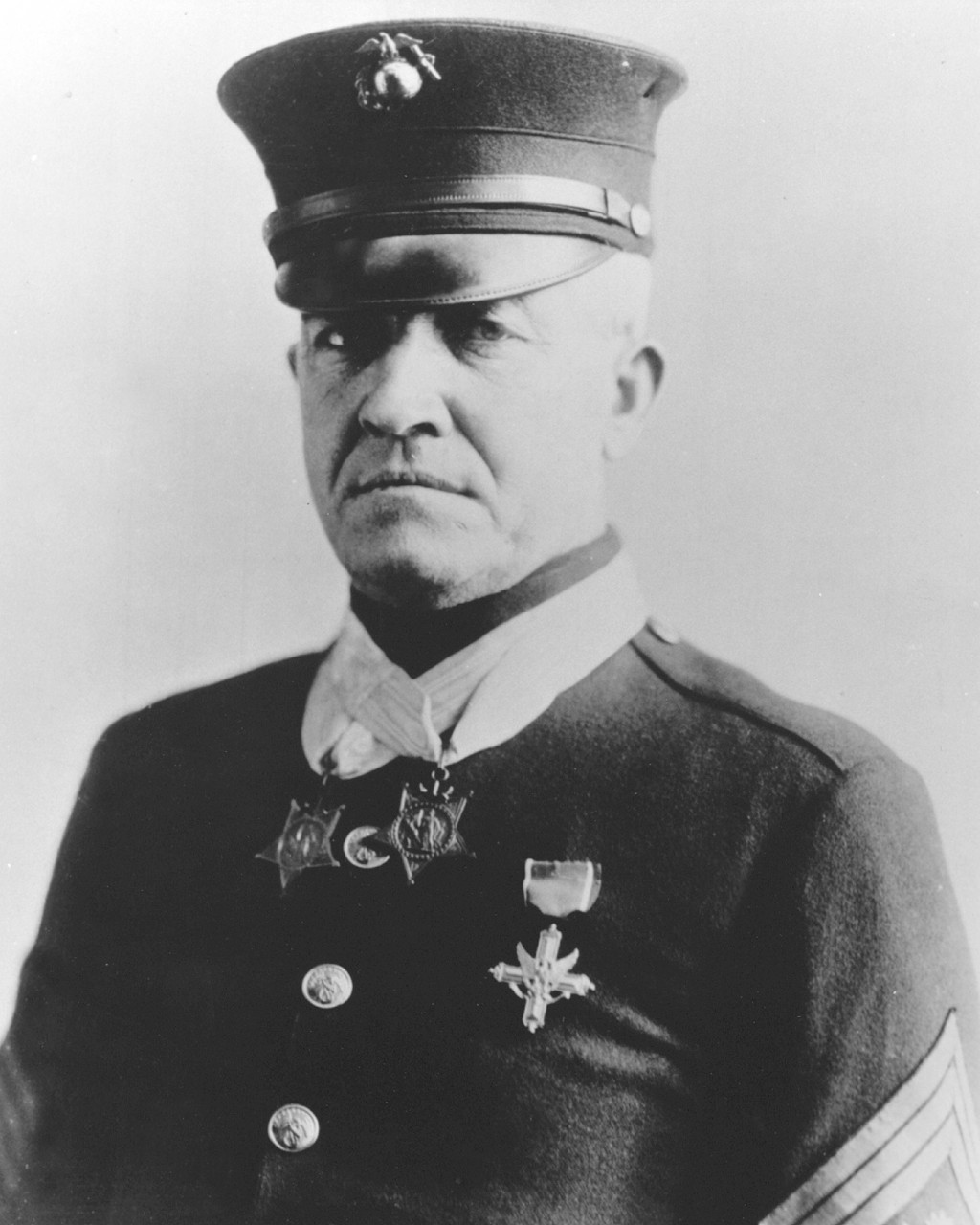 Download a PDF of the Daniel Joseph Daly Biography [215KB]

Highlight:  "the only enlisted Marine to have won the Medal of Honor twice, for two separate acts of gallantry."

Born November 11, 1873 at Glen Cove, Long Island, New York, Daniel Daly enlisted in the U. S. Marine Corps in 1899, and served continuously until September, 1919 when he transferred to the Fleet Marine Corps Reserve on inactive status.  After three months he returned to active duty, and on February 6, 1929 was retired and advanced to Sergeant Major.  He died at Glendale, Long Island, on April 27, 1937.  He was described as “the fightingest man ever to serve with the Marine Corps,” having fought his way around the world from “Boxer to Boche,” the only enlisted Marine to have won the Medal of Honor twice, for two separate acts of gallantry.

He served as a private during the Boxer Rebellion in China, and was awarded the Medal of Honor by Congress when

“he distinguished himself by meritorious conduct in the presence of the enemy during the battle of Peking, China, 14 August, 1900…”

when alone and single handed, under Chinese sniper fire, he defended his position on a bastion of the Tartar Wall against 400 until reinforcements arrived.

He subsequently served at San Juan, Puerto Rico; aboard ships; and at shore stations.  He was aboard the USS Springfield when on March 14, 1911, gasoline caught fire and menaced the powder magazines.  He beat out the flames with utter disregard for his life, before the general alarm could be sounded.  He received commendations from his Commanding Officer and the Secretary of the Navy.

He served ashore in Cuba from May, 1912 to January, 1913; on expeditionary duty at Vera Cruz, Mexico, from April 21 to November 23, 1914; with the Marine expeditionary forces ashore in Haiti, where he participated in actions against the bandits responsible for the revolt which overthrew their government and murdered the President.  He was awarded his second Medal of Honor by Congress for action on that occasion, and cited as follows:

“Serving with the Fifteenth Company of Marines on 22 October, 1915, Gunnery Sergeant Daly was one of the company to leave Fort Liberte, Haiti, for a 6-day reconnaissance.  After dark on the evening of 24 October, while crossing the river in a deep ravine, the detachment was suddenly fired upon from three sides by about 40 Cacos concealed in bushes about 100 yards from the fort.  The Marine detachment fought its way forward to a good position, which it maintained during the night, although subjected to a continuous fire from the Cacos.  At daybreak the marines, in three squads, advanced in three different directions, surprising and scattering the Cacos in all directions.  Gunnery Sergeant Daly fought with exceptional gallantry against heavy odds throughout this action.”

Serving with the American Expeditionary Forces in France from November 4, 1917 to April 21, 1919, he participated in operations against the enemy in Toulon Sector; Aisne; Chateau Thierry Sector (Belleau Wood); St. Mihiel Offensive; Champaign Offensive (Blanc Mont), and was twice wounded.  He also served with the American Army of Occupation in Germany after the Armistice.  On June 5, 1918, at the risk of his life he extinguished a fire in an ammunition dump

near Belleau Wood, thus preventing a disastrous explosion.  Five days after, he attacked an enemy machine-gun emplacement; alone and unassisted he captured it by use of a few hand grenades and his automatic pistol.  On the same day, during the German attack on Bouresches he brought in the wounded under fire.  For those deeds he was awarded the Army Distinguished Service Cross; the Navy Cross; and also the French Government decorated him with their Medaille Militaire; the Croix de Guerre with Palm; and French Victory Medal with four clasps.

USS Daly (DD 519) was commissioned in the United States Navy in March, 1943. Launched at the plant of Bethlehem Steel Company, Staten Island, New York, on October 24, 1942, she was sponsored by Mrs. Arthur Ransweiler of Glendale, Long Island, New York, who christened that vessel USS Daly in honor of her uncle, Sergeant Major Daniel Daly.