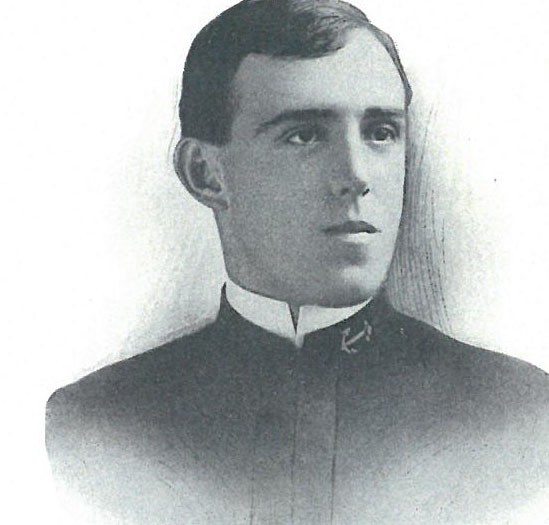 Captain Canaga was born in Annapolis, Maryland, March 4, 1882, the son of the late Commander Alfred B. Canage, USN.  He attended public schools in Leesville and Scio, Ohio, in Baltimore, Maryland, and Washington, DC before his appointment to the US Naval Academy, Annapolis, Maryland from the Sixteenth District of Ohio in 1901.  He was graduated as a Passed Midshipman in January, 1905 and served the two years at sea then required by law before being commissioned Ensign in January, 1907.  He was commissioned Lieutenant (junior grade) and Lieutenant on January 31, 1910, and during the World War received temporary promotions to the grades of Lieutenant Commander and Commander.  He was promoted to Commander to rank from June 3, 1921, and Captain to rank from September 2, 1927.  Transferred to the Retired List of the Navy on June 30, 1940, he remained on active duty until January 1946.

After graduation in 1905, Captain Canaga served consecutively in USS Ohio, USS Baltimore, and USS Vermont.  During the world cruise of the Battle Fleet he was transferred in November, 1908, while at Manila, to duty as aide on the staff of Rear Admiral Potter, Commander 4th Division, Atlantic Fleet, USS Wisconsin, flagship.  Detached from that assignment in September, 1909, he served in USS Virginia on the staff of Rear Admiral S.P. Conly, until ordered to duty in connection with assembling the crew of  USS Michigan.  He joined the Michigan when she was commisioned January 4, 1910, an was detached in April, 1911.  The three succeeding years he was on duty at the Naval Proving Ground, Indian Head, Maryland.

Captain Canaga had command of USS Alert from February, 1914 until June, 1915, and was executive officer of USS New Orleans as officer in charge, Pacific Coast Torpedo Station, Keyport, Washington.  In the winter of 1917, he was on duty in the Office of the Chief of Naval Operations, Navy Department, Washington, DC and in April, 1918 reported for duty as aide on the staff of Commander Mine Squadron One, Atlantic Fleet.  This squadron was a part of the Mine Force engated in fitting out ships and training crews in the United States for the duty of laying a mine barrage in the North Sea.  Detached in the spring of 191, Captain Canaga then had duty at Boston, Massachusetts in connection with fitting out mine sweepers.  He joined USS Robin, one of three ships engaged in experiments conducted off the Nantucket coast to be employed in clearing the mine barrage fron the North Sea.  Later, he was in command of Mine Sweeping Division 1 in European waters, and on duty at Base 18, Inverness, Scotland in July, 1919.

On July 27, 1919 he reported for duty as US Naval Port Officer and Force Commander's representative at Hamberg, Germany, continuing in that assignment until September.  For one year from November 1919 he had duty under instruction at Naval War College, Newport, Rhode Island.  This was followed by duty as a member of the US Naval Mission to Brazil, from February 1921 to November, 1922.  Upon his return to the United States he reported at the Todd Dry Dock and Construction Corporation, Tacoma, Washington, for duty in connection with fitting out USS Omaha, first modern light cruiser of the Navy to be completed, and served as her Executive Officer from her commissioning, February 24, 1923 until April, 1925.  For the next two and one-half years he was Executive Officer of the Naval Training Station, San Diego, California.

Captain Canaga assumed command of USS Medusa, repair ship, in November, 1927, and served in that command until June, 1929.  He was Professor of Naval Science and Tactics at the University of California, Berkeley, from July, 1929 until December 1932 when he returned to sea duty in command of USS Louisville.  Detached from that cruiser in June, 1934, he served from July of that year until October, 1936 as Director of the Central Division, Office of the Chief of Naval Operations, Navy Department.  He was Commander Destroyer Squadron 4, Battle Force, US Fleet, from December, 1936 and following its redesignation as Destroyer Squadron 12, USS Borie, flagship.

Detached from that command in February, 1938, Captain Canaga served from April 21, 1938 until January 31, 1940 as Advisory Chief of Staff to the Minister of Marine in Peru.  Before and at the start of World War II, from July, 1940 until November, 1942 he served as District Intelligence Officer, Eleventh Naval District, San Diego, California.  He was then transferred to the Bureau of Naval Personnel where he served as Director of Training and in charge of the Demobilization and Post-War Plans Section, with additional duty as Representative, Joint Army-Navy Committee on selection of colleges for the College Training Program, and the President's Armed Forces Committee on Post War Educational Opportunities for Service Personnel.

In March, 1944 Captain Canaga returned to California to take over the duties of Commanding Officer of the Navy V-12 Units in the San Francisco Bay area, and the dutie of Professor of Naval Science and Tactics at the University of California, Berkely, California.  He was relieved of that duty in June, 1945.  He was then relieved of all active duty in January 1946.

During World War I, Captain Canaga was awarded a special Letter of Commendation by the Secretary of the Navy which entitles him to wear the Silver Star on the ribbon of his Victory Medal, with Mine-Clasp. He also has the Army Occupation of Germany Medal, Amerian Defense Service Medal, Base Clasp, American Campaign Medal, World War II Victory Medal, and has received from Mexico the Order of Naval Merit and from Peru the El Sol del Peru, with grade of Commendador, for distinguished service to that Republic, 1938-1940.

In October 1943, Captain Canaga was the recipient of an Honorary Degree of Doctor of Laws from Muhlenburg College, and is a member of the Navy Historical Society.