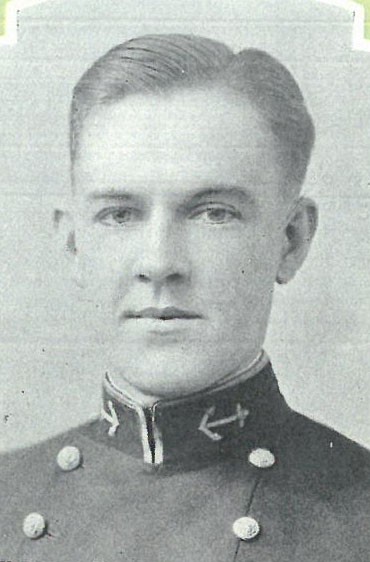 Charles Black Beasley was born on December 30, 1903, in Linden, Tennessee, son of John M. Nannie E. (Webb) Beasley, both now deceased. He attended Linden Preparatory School; Hume Fogg High School, Nashville, Tennessee; Branham and Hughes Military Academy, Spring Hill, Tennessee: and a part-course at Vanderbilt University, Nashville, prior to entering the US Naval Academy, Annapolis, Maryland, upon appointment from the Eighth District of his native state in 1923. Graduated and commissioned Ensign, with the Class of 1927, on June 2, he subsequently advanced in rank, attaining that of Captain, to date from March 20, 1945.

After graduation in 1927, he remained at the Naval Academy for the summer course in aviation, before reporting in September 1927 on board USS California. In November 1929 he transferred to USS Preble and in November 1930 joined USS Southard. For two years, June 1932-June 1934, he was attached to USS ALTAIR and for the next year continued duty afloat in USS Marblehead. Detached from the latter in June 1935, he next had duty at the Naval Training Station, Great Lakes, Illinois.

In June 1939 he was assigned to USS Nevada and following the United States’ entry into World War II, December 8, 1941, he assumed command on December 13 of that year, of USS Jamestown, operating as a training ship for the Midshipman at the Naval Academy. Ordered to the South Pacific, that vessel, under his command, departed New York in August 1942 and arrived at Espiritu Santo, New Hebrides the next month. Enroute to Tulagi from the New Hebrides the Jamestown was subjected to many air attacks and was credited with a probable hit on an enemy submarine. Operating under the Commanding General FIRST Marine Division, the Jamestown serviced PT Boats, constricted pipeline from a water hole and assisted in the preliminary repair of battle damage to cruisers which lay in Tulagi Harbor.

“For meritorious conduct…as Commanding Officer of the USS Jamestown during December 1942 and January 1943…” he received a Letter of Commendation, with authorization to wear the Commendation Ribbon, from the Commander in Chief, US Pacific Fleet. The citation continues in part: “By his initiative and cooperation, he greatly aided in the prosecution of the war against the Japanese in the Solomon Islands. He personally supervised the installation of a pipeline of improvised materials from a water point to the anchorage of his vessel. This line was approximately a mile in length and ran through almost impenetrable swamp and jungle. It was fro many months the sole source of water for many small craft and battle-damaged larger ships at Tulagi…”

He is also entitled to the Ribbon for, and a facsimile of the Presidential Unit Citation awarded the First Marine Division Reinforced.

Detached from the Jamestown in February 1943, he was ordered to the Submarine Chaser Training Center, Miami, Florida, where he served as Executive Officer until January 1945. After a month’s indoctrination at the Combat Information Center of the Pacific Fleet, he reported on February 28, 1945, as Executive Officer on board USS New Mexico. “For heroic achievement…(in that capacity) during operations against enemy Japanese forces in the Central and Western Pacific War Areas from February 28 to September 2, 1945…” he was awarded the Bronze Star medal with Combat “V.” The citation further states in part:

“…Captain Beasley kept the internal administration of his ship at a high peak of efficiency. In the face of frequent threats and actual air attacks by the enemy and confronted with the complex problems of sustaining morale and training in a forward area under adverse conditions of climate and facilities, he served as a constant source of inspiration to the officers and men serving under him…”

He remained on board the New Mexico until April 1945, after which he commanded USS Mellette for a year. In August 1946 he joined the staff of Commander San Francisco Group, Pacific Reserve Fleet for duty as Material and Inspection Officer and in January 1949 assumed command of USS Cimarron (AO-22). He was Operations Officer on the staff of Commander Military Sea Transportation Service, Pacific Area, with headquarters in San Francisco, California, from November 1949 until January 1952, when he became Commanding Officer of USS Mt. McKinley.

Detached from command of the Mt. McKinley in July 1952, he next served as Commander Landing Ship Flotilla ONE and in July 1953 became became Director of Planning on the staff of Commander Western Sea Frontier.