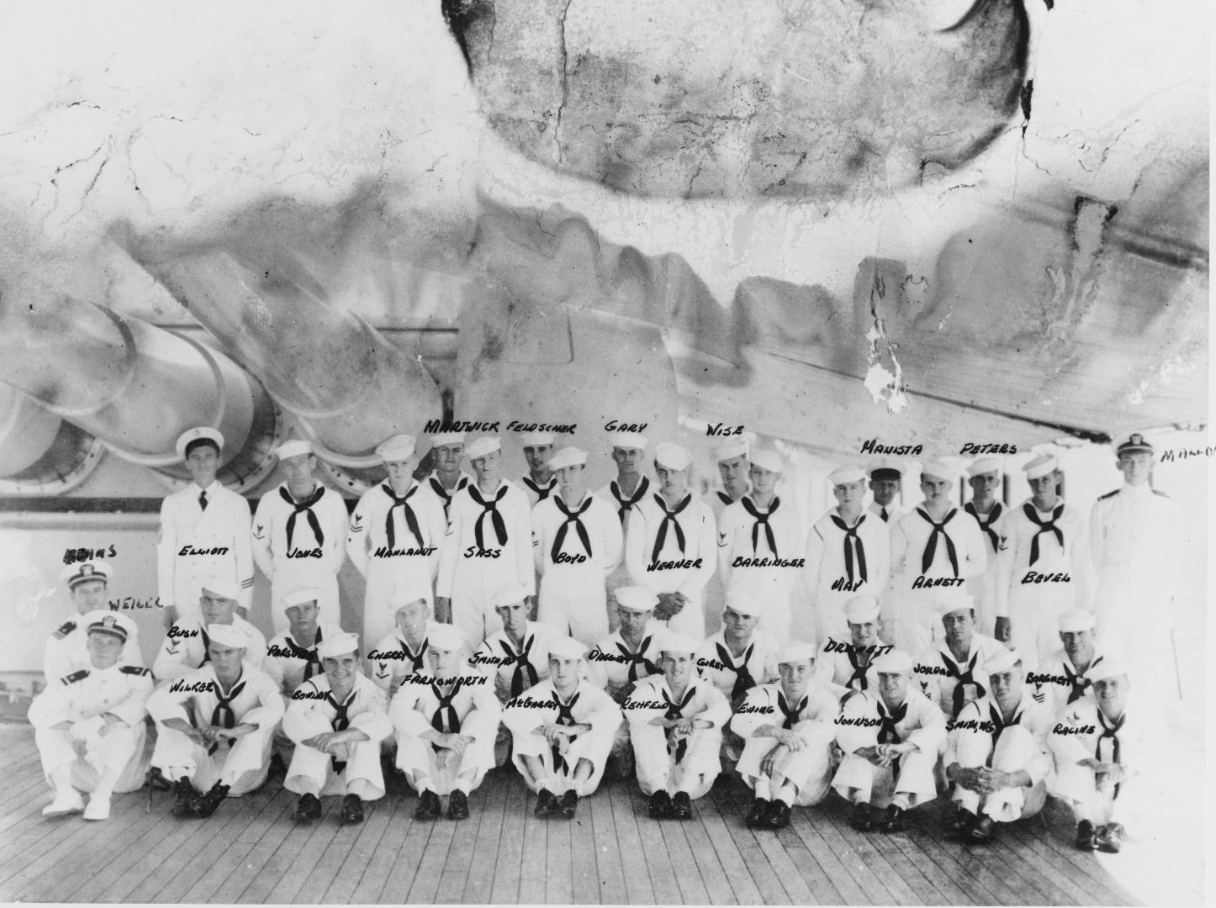 The officer in the second row, left, is Lieutenant Carlton R. Adams.

Carlton Rolla Adams, born in Norfolk, Virginia, 6 April 1908, soon became a resident of North Carolina, where he attended Oak Ridge Military Institute, at Oak Ridge, and Wilson High School in Wilson, before entering the US Naval Academy, Annapolis, Maryland, 22 June 1925. He was graduated and commissioned Ensign on 5 June 1930, subsequently advancing to the rank of Captain to date from 1 July 1949, having served in the temporary rank of Captain from 10 December 1945 until 1 December 1947.

After graduation in June 1930, he reported to USS Wyoming, and following five months' duty in that battleship, was transferred to USS Arizona, in which he served until March 1934. Duty in connection with fitting out USS Farragut preceded service in that vessel from her commissioning, June 1934 until June 1937. He then returned to Annapolis where he completed the course in General Line at the Postgraduate School in May 1938, and thereafter until March 1939 had duty at the Naval Observatory, Washington, DC. During the latter period he had additional duty as White House Aide.

Duty at sea again began in 1939, first on board USS Augusta, later in USS Houston, both operating in the Asiatic Area. Detached from the Houston a few months before that cruiser was sunk in the Java Sea on 1 March 1942, he was ordered to USS Lang as Executive Officer. That destroyer was one of the first group from the United States Fleet to join the British Navy in European waters, participating with the aircraft carrier Wasp in the reinforcement of Malta, then moving on to Guadalcanal and other areas of operation in the Pacific.

Detached from USS Lang in March 1943, he assumed command of USS Henley, operating in the South Pacific. The Henley was sunk by enemy submarine on 3 October of that year after participating in the Eastern New Guinea operations (Finschhafen occupation). At the same time he was wounded in the action for which he was awarded the Purple Heart Medal.

"For conspicuous gallantry and intrepidity in action as Commanding Officer of a United States Destroyer which was a unit of a Task Group returning from Finschhafen, New Guinea, on 22 September 1943... " he was awarded the Silver Star Medal, the citation further stating:

"When his force of destroyers and tank landing craft was suddenly attacked by ten enemy torpedo planes, Commander Adams immediately brought his ship into striking position for effective protection of the convoy and, by skillful maneuvering, succeeded in avoiding all hostile torpedoes. Despite repeated and withering enemy machine-gun fire, he successfully repelled the assault and brought his ship and convoy through with only minor damage..."

After the sinking of the Henley, he was ordered to the Navy Department, Washington, DC, and assigned duty in the Bureau of Naval Personnel, as Director of the Standards and Curriculum Division. He again had sea duty in 1945 as Commander Destroyer Division 6, and Destroyer Division 32, and returned to the Bureau of Naval Personnel after the cessation of hostilities, for duty as Administrative Assistant to the Assistant Chief of that Bureau. For services in that capacity until June 1946, he received a Letter of Commendation with authorization to wear the Commendation Ribbon, from the Secretary of the Navy.

He served as Commander Destroyer Division 52 from June 1946 until March 1947, when he was ordered to the Naval Academy for duty as Executive Officer, Executive Department. He had instruction at the Naval War College during the winter of 1950-1951, after which he served as Operations and Training Officer on the staff of Commander Cruisers, Atlantic Fleet. Under orders of 11 April 1952 he assumed command of USS Chuckawan (AO-100) and held that command until June 1953 at which time he was transferred to the Office of the Chief of Naval Operations and assigned as the Naval Advisor to the Planning Board of the National Security Council. In May 1955 he assumed command of USS Des Moines (CA -134).