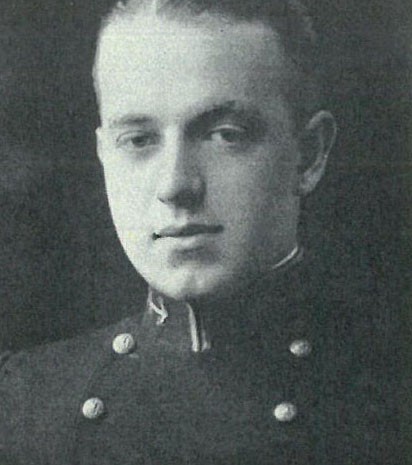 William Donald Anderson was born in Streator, Illinois, on 26 January 1901, son of Mrs. Emily L. Anderson and the late John Hunter Anderson. He attended Streator High, and entered the United States Naval Academy, Annapolis, Maryland, in 1919 by appointment from Illinois. Graduated and commissioned Ensign in July, 1923, he attained, by subsequent promotions, the rank of Captain to date from 1 May l943.

For two years after his graduation, he served in USS Colorado, USS Texas, Concord and Dobbin, consecutively. From June, 1925 he was a student aviator at Naval Air Station, Pensacola, Florida, being designated Naval Aviator as of 24 April 1926, and when detached the following July, he joined USS Mississippi for duty in the air units of that battleship. In July, 1929 he returned to Pensacola Naval Air Station for duty, and served until July, 1931, and for three years thereafter he was attached to Scouting Squadron 3 based on the USS Lexington, a unit of Carrier Division ONE at San Pedro, California.

From June, 1934-36, he served on the staff of Commander Aircraft Squadrons and attending craft, at the Fleet Air Base, Pearl Harbor, T. H. He then joined the USS Concord, flagship of Cruiser Division 3, Battle Force, on the West Coast, serving a two year tour in that assignment before assuming command in July, 1938 of Observation Squadron 1.  From June, 1939 to March, 1941 he served at the Naval Air Station, Pensacola, transferring to the Naval Air Station, Norfolk, Virginia, to fit out Scouting Squadron 201, the original carrier escort squadron, which operated from the new carrier escort Long Island.

In April, 1942 he was transferred to USS Ranger, to serve as Air Officer of that carrier during the North African invasion, also participating in the ferrying of Army fighter aircraft and troops to African bases. Returning to the United States, in 1943-44 he commanded the Naval Air Station, Melbourne, Florida. Late in 1944 he commanded USS Savo Island (CVE 78), reporting to the Commander SEVENTH Fleet, Pacific Fleet. In that command he participated in operations for the seizure of Leyte, and initial landings at Lingayen Gulf on Luzon, P I. Later reporting to the Fifth Fleet, preparations were made for the Okinawa campaign. "For exceptionally meritorious conduct...during operations against enemy Japanese forces at Okinawa from 21 March to 29 April 1945" he was awarded the Legion of Merit with combat distinguishing device, V, also receiving the ribbon for and facsimile of the Presidential Unit Citation awarded the Savo Island. The citations in part further state:

Legion of Merit:  "...During this period of intensive and hazardous operations against the enemy's last strongholds in the Pacific, Captain Anderson ably fought his ship and...aided greatly in providing vital support to our amphibious forces and our troops ashore, thereby contributing materially to the successful completion of this campaign..."

Presidential Unit Citation-- USS Savo Island: "For extraordinary heroism in the air, ashore and afloat. Boldly penetrating enemy controlled waters, the USS Savo Island and her attached air squadrons struck fiercely at her targets despite determined Japanese air and "- sea opposition, destroying or damaging hostile warships, aircraft, shore batteries and other installations vital to the enemy. As one of the southern carrier group which received the brunt of Japanese land-based plane attacks in the historic Battle for Leyte Gulf, (she) fought her guns fiercely against enemy dive bomber and suicide planes...During the Mindoro assault, the Savo Island aided in covering the operation successfully despite hostile airfields surrounding the Sulu Sea. Her air power protected our invasions and land offensives and covered our ships during their advance and retirement..."

After the close of the war, the Savo Island was organized into the North Pacific Force to effect the occupation of northern Honshu and Hokkaido. From the end of September, 1945 she was a unit of the transport service (Magic Carpet) for the return of the Armed Forces from the battle zones to the United States. When relieved of command of the Savo Island, Captain Anderson commanded the Naval Air Station, Livermore, California, briefly in 1946, transferring to the Naval Air Station, Grosse Ile, Michigan, which he commanded the year 1946-47.

In August, 1947 he was ordered as Commanding Officer of USS Antietam (CV 36), serving a two year tour. Returning to shore duty in the fall of 1948 he assumed command of the Naval School (preflight) at Naval Air Station, Pensacola. Reporting in the Navy Department, on orders of April, 1950, he served in the Office of the Deputy Chief of Naval Operations (Air), Aviation Personnel Division. Ordered detached in September, 1951, to duty as Chief of Staff and Aide to the Chief, Naval Air Training, at the Naval Air Station, Pensacola, he is now serving in that assignment.