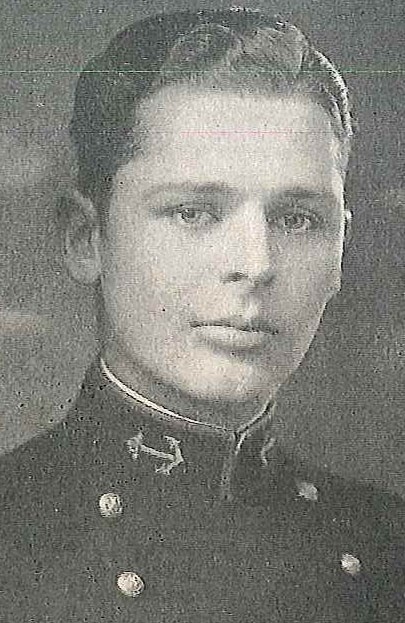 Robert Gordon Armstrong was born on April 21, 1904 in Wakefield, Nebraska, son of Reverend H.F. Armstrong, LLD, and the late Mrs. Alice Richards Armstrong. He attended public schools in Illinois, graduating from Rockford High School, Rockford, Illinois, before entering the US. Naval Academy, Annapolis, Maryland, as Midshipman in June 1922. He was commissioned Ensign upon graduation with the class of 1926, and subsequently advanced through the grades to that of Captain, to rank from August 1, 1943.

After graduation, he remained at the Naval Academy for the course in aviation, and reported in October 1926 to USS Maryland. He served until June 1927 as a Battery and Junior Division Officer when he was detached for temporary duty with the Navy Rifle Team at Camp Ferry, Ohio, and at Wakefield, Massachusetts. Back in the Maryland in December of the same year, he continued duty until April 1929, when he was ordered to Naval Air Station, Pensacola, Florida, for Aviation Training. Before his detachment in January 1930, he was designated Naval Aviator.

Assigned duty with Aircraft Squadrons, Battle Fleet, he reported to Observation Squadron THREE, attached to USS New Mexico, and served as a pilot until October 1931. Duty followed at Coco Solo, Canal Zone, until May 1934, with Patrol Squadron Two-S (later redesignated Patrol Squadron TWO-F), and the following two years, he served with Scouting Squadron THREE-B, based on USS Lexington.

He returned to Naval Air Station, Pensacola, Florida, to serve as Instructor in the Ground School Department from June 1936 until June 1938, after which he reported to duty with Cruiser Scouting Squadron TWO, attached to USS Trenton, until April 1939. He then served until January 1940 as Senior Aviator aboard USS Idaho, and with Observation Squadron THREE.

He was next ordered to duty as Flight Officer, Bombing Squadron FIVE. In May of the following year he became Commanding Officer of that Squadron while on temporary duty attached to USS Ranger, carrying out pre-Pearl Harbor patrols in the Atlantic. As Commanding Officer of Squadron FIVE, later based on USS Yorktown, he participated in the early stages of World War II hostilities against Japan in the Pacific, being active in the Campaigns in the Marshall and Gilbert Islands and in the New Guinea area. For outstanding services in that assignment, he was awarded the Air Medal, Navy Cross and received a Letter of Commendation with Combat “V,” from the Commander in Chief, Pacific Fleet. The citations to the medal follow:

Air Medal: “For meritorious achievement in aerial flight as Pilot and Squadron Commander of Bombing Squadron FIVE, attached to USS Yorktown, in action against enemy Japanese forces, in the vicinity of Jaluit Atoll, Marshall Islands, on February 1, 1942. Participating in the first raid by Naval forces on Japanese territory with little advance information, Captain (then Lieutenant Commander) Armstrong flew to the objective through extremely hazardous weather and in darkness to press home a daring dive bombing attack on hostile sore installations and shipping…(and) contributed materially to the infliction of severe damage on the enemy…”

Navy Cross:: “For extraordinary heroism as Bombing Squadron Commander during an attack against enemy Japanese forces Salamaua and Lae, New Guinea, on March 10, 1942. With calm judgment and consummate skill, Lieutenant Commander Armstrong fearlessly led his squadron over the high mountains and dense jungles of new Guinea in dive-bombing and strafing attack against enemy light cruisers and destroyers. In the face of heavy antiaircraft fire, he and his squadron inflicted severe damage on the enemy, resulting in the probable destruction of three of the hostile ships…”

Serving next as Assistant Air Officer of USS Yorktown, he participated in the Battle of Coral Sea and the Battle of Midway. After the sinking of the Yorktown on June 7, 1942, he commanded the Advanced Carroer Training Group, Pacific Fleet, at the Naval Air Station, San Diego, California, until January 1943. Later in 1943, he was in command of the Naval Air Station, Grosse Ile, Michigan, then giving primary flight training to British students of the Royal Air Force and Royal Navy. From November 1943 through May 1944 he served as Air Officer on the staff of Commander, Carribean Sea Frontier, at San Juan, Puerto Rico.

After fitting out USS St. George during June 1944, he commanded that seaplane tender from July 1944 until September 1945, participating in the last year of Combat Operations in the Western Pacific and Asiatic areas. For exceptionally meritorious conduct in that command and as commander of a Naval Search and Reconnaissance Task Unit during operations against enemy Japanese forces in the Central and Western Pacific Ocean Areas, from November 28, 1944 to April 15, 1945, he was awarded the Legion of Merit with Combat “V” The citation states:

“By his administration, training methods and understanding of patrol plane operations, Captain Armstrong contributed materially to the successful performance of his ship and task unit. During the Okinawa operation, he maintained his ship in a constant state of readiness and rendered especially effective assistance in the fulfillment of a difficult assignment. His leadership, skill and devotion to duty were in keeping with the highest traditions of the United States Naval Service.”

Detached from St. George in September 1945, he was ordered to duty as Air Officer for the Eastern Sea Frontier at Headquarters, New York City, N.Y. In August 1948 he assumed command of Naval Operating Base, Roosevelt Roads, Puerto Rico. Detached from that duty under orders of July 15, 1949, he reported in August to the Chief Aviation Branch under the Deputy Chief of Naval Operations for Air. On April 18, 1952 he was ordered detached and to duty on the staff of Commander, Military Air Transportation Service, Andrews Air Force Base, Camp Springs, Maryland.