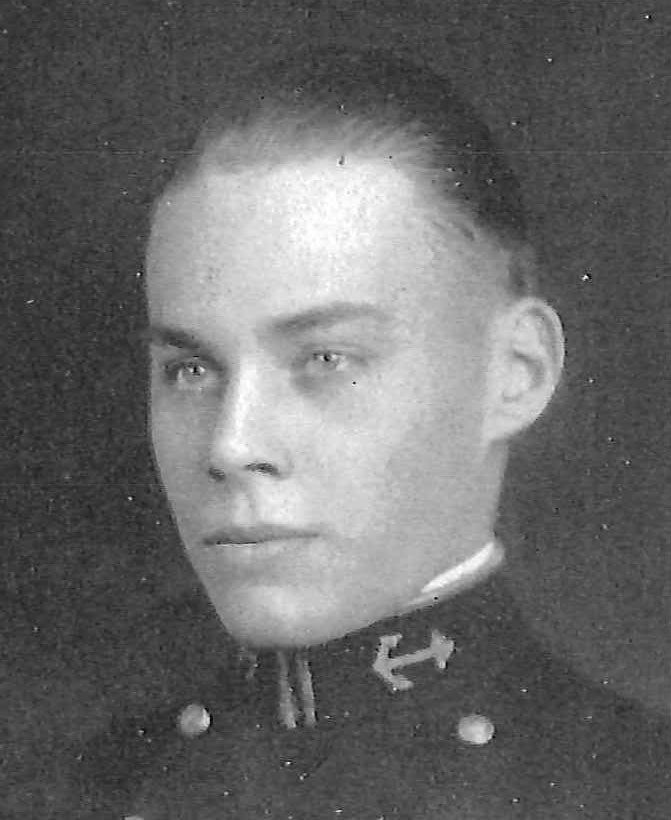 Wilbur Haines Cheney, Jr., was born on April 7, 1912, in Sedan, Kansas, son of Dr. W.H. Cheney and Mrs. (Myra Allen) Cheney. He attended public schools in Sedan before his appointment to the US Naval Academy, Annapolis, Maryland, from his native state in 1930. He was graduated and commissioned Ensign in the US Navy on May 31, 1934, and through subsequent promotions attained the rank of Captain, to date from July 1, 1953.

After graduation from the Naval Academy in May 1934, he joined USS New Mexico, and served as a junior officer in that battleship until December 1936, when he was transferred to USS Milwaukee. Detached from that cruiser in May 1938, he continued duty afloat as Gunnery Officer of USS Pruitt, and from May 1942 until December 1943 served as Executive Officer of the minelayer. In January he reported to the Inspector of Ordnance, Ford Instrument Company, and was assigned duty as Resident Naval Inspector of Ordnance at the Arma Corporation, Brooklyn, New York, in which capacity he served until October 1944.

Duty for four months as Officer in Charge of Naval civil Affairs (Staging Area), Fort Ord, California, preceded his first command, that of USS Robert H. Smith. He is entitled to the Ribbon for, and a facsimile of, the Navy Unit Commendation awarded the USS Robert H. Smith, and was personally awarded the Bronze Star Medal with Combat “V,” and the Silver Star Medal. The citations follow in part:

Navy Unit Commendation: “For outstanding heroism in action while attached to an Amphibious Force during the seizure of enemy Japanese-held Okinawa, Ryukyu Islands, from March 24 to June 24, 1945,…. The USS Robert H. Smith provided effective cover for our minesweeper groups against hostile attack by air, surface, submarine and shore fire. Constantly vigilant and ready for battle, she made an outstanding record as fighter director ship and, by her expert control of combat air patrols, was directly instrumental in preventing damage to ships on picket station with her… A seaworthy, fighting ship, complemented by skilled and courageous officers and men, the Robert H. Smith achieved a gallant combat record attesting the teamwork of her entire company, and enhancing the finest traditions of the United Sates Naval Service.”

Bronze Star Medal: “For meritorious service… during operations against enemy Japanese forces in the Okinawa Area and in the East China Sea, from May 11 to August 18, 1945. Skillfully directing his ship through numerous hazardous operations while on patrol, support, radar picket and screen duty, Commander Cheney contributed materially to the success of his ship in destroying three hostile aircraft and assisting in the destruction of several others…”

Silver Star Medal: “For conspicuous gallantry and intrepidity as Commanding Officer of the USS Robert H. Smith… during the Okinawa Campaign on the night of May 27-28, 1945. With his ship patrolling a radar picket station when it was attacked by approximately thirty enemy aircraft using bombs, torpedoes and suicide tactics, (he) skillfully directed his ships and its guns in the destruction of three of the hostile planes and in the probable destruction of three more. By his leadership, fighting spirit and courageous devotion to duty, he averted the attacks without loss of personnel or material damage to ship or any of the ships n his station…”

Detached from the Robert H. Smith in February 1947, he reported a month later to the Naval Gun Factory, Washington, DC, where he served as Senior Assistant to the Design Officer until September 1949. Later that year he assumed command of USS Gyatt, continuing in command until August 1951. He was a student at the Armed Forces Staff College, Norfolk, Virginia, in 1951-1952, and in March 1952 was given command of Destroyer Division 152. Since May 1953 he was has been Ordnance Officer at the Norfolk Naval Shipyard, Portsmouth, Virginia.