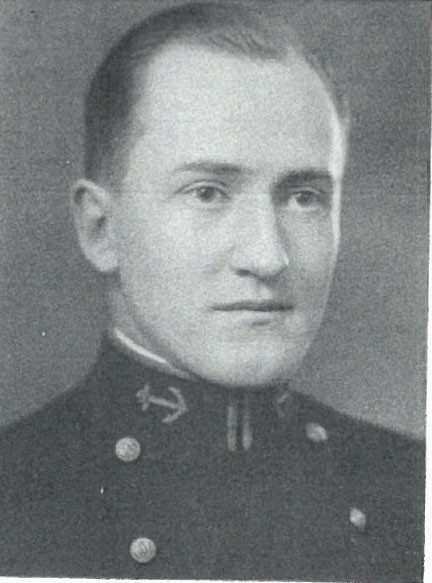 Robert Snowden Camera was born on April 19, 1909, in Woodbury, New Jersey, son of Nicholas A. and Bertha M. (Kendrick) Camera.  He was graduated from Eastern High School in Washington, DC, and attended the University of Maryland for a year prior to his enlistment in the US Navy on June 7, 1928. He was honorably discharged to accept an appointment as Midshipman, and on July 5, 1929, entered the US Naval Academy, Annapolis, Maryland. There he played lacrosse and was a Midshipman Lieutenant his First Class year. He was graduated with a Bachelor of Science degree on June 1, 1933, but was not then commissioned in the US Navy since personnel allocations would not permit expansion due to the depression.  Commissioned Ensign in the US, Naval Reserve in July 1933; he was transferred to the US Navy on June 25, 1934, and subsequently advanced in rank to that of Captain, to date from July 1, 1952.

During the year prior to receiving his commission in the US Navy, while he was an officer in the Naval Reserve, in inactive status, he was employed by Ford Instrument Company, Long Island City, New York , as a Test Engineer.  He returned to the Navy by Special Act of Congress in July 1934, and for two years thereafter was attached to USS Ranger on the East and West Coasts, serving as Watch, Deck and Division Officer, with Deck and Engineering qualifications.  From February to August 1936 he was attached to USS Saratoga, as Communications Watch Officer on the staff of Commander Aircraft, Battle Force, based at San Diego, California.

For ten months he served as Watch, Deck, Division and Communications Officer of USS Brazos a unit of the Train Base Force, and from June 1937 until June 1938 was a student at the Naval Air Station, Pensacola, Florida.  Designated Naval Aviator, he reported next to USS Oklahoma to serve as a pilot of her aviation unit µntil June 1940. From August of that year until November 1941 he served as a pilot of Patrol Squadron 51 (later 71), with collateral duty as Material Officer when it was based at Argentia, Newfoundland, participating in operational survey flights to Labordor and Greenland.  Immediately before the Japanese attack on Pearl Harbor, December 7, 1941, he was transferred to Patrol Squadron 73, and served as Flight Executive Officer, later when it was based at the Fleet Air Base, Iceland, in addition to his duties as a pilot of the USN Patrol Plane Detachment there.

He was awarded the Air Medal and cited "For meritorious achievement in aerial flight as Pilot of a Bomber Plane engaged in antisubmarine patrols and convoy coverage flights in the North Atlantic Area during the winter of 1941-1942. Operating from newly established bases despite icing, low visibility, blizzards and high winds (he) participated in numerous missions to counteract enemy submarine activity end contributed materially to the safe passage and protection of our valuable convoys..."

In October 1942 he joined the staff' of Commander Fleet Air Wing TWELVE as Gunnery and Tactics Officer when it was formed at Key West, Florida.  He remained in Key West a s  Commander Training Detachment attached to the staff of Commander Fleet Air Wing FIVE, Norfolk, Virginia, from December 1943 to December 1944. He was awarded the Bronze Star Medal "For meritorious service as Training Officer on the staff of Commander Fleet Air Wing FIVE from October 1943 to December 1944..."  The citation points out that he "skillfully supervised the development of more effective antisubmarine tactics and training of numerous pilots, crews and squadrons in the use and operation of special aircraft anti-submarine weapons despite complex problems of supply, organization and conflicting schedules..(and) succeeded in establishing close liaison with Allied air activities in connection with training activities and in initiating several projects of importance to United States Naval Aviation..."

He served for seven months as an Air Group Commander in Fleet Air Wing SEVEN, operating under the 19 Group Royal Air Force Coastal Command, Plymouth, from Dunkeswell, Devonshire, England.  As such he saw the end of the war in Europe.  He was awarded the Legion of Merit with the following citation:

"For exceptionally meritorious conduct in the performance of outstanding services to the Government of the United States as Commander of a Patrol Air Group conducting anti-submarine operations in the English Channel and the Western Approaches to the British Isles from January 23 to May 30, 1945. Demonstrating professional ability and leadership, Commander Camera maintained the operational efficiency of his group at a high level during a period of intense enemy submarine activity immediately prior to the cessation of hostilities in Europe. When additional operating units reported for duty during this period, he worked tirelessly to complete their training and enable them to become operational in a minimum of time..."

In February 1952 he joined the staff of Commander Hunter-Killer Force, Atlantic Fleet as Assistant Chief of Staff for Plans and Operations and remained in that assignment until March 1953. He served as Chief of the Naval Section, Military Assistance Advisory Group, France, with Headquarters in Paris. Under orders of March 1, 1955, to the staff of the Naval War College, Newport, Rhode Island, he reported in August to that activity.

In addition to the Legion of Merit, Bronze Star Medal and Air Medal, Captain Camera  has the American Defense Service Medal; the American Campaign Medal; the European African-Middle Eastern Campaign Medal; the World War II Victory Medal; and the National Defense Service Medal.  He also has been awarded the Order of the British  Empire by the Government of  Great Britain and  most recently the Legion of Honor by the French Government for World War II service.