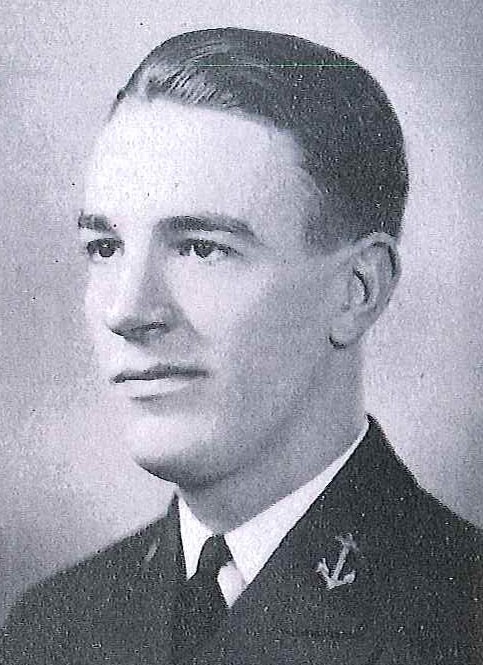 Edward Grover DeLong was born in Springfield, South Dakota, on August 20, 1915, son of Arthur Eugene and Sarah (Truesdell) DeLong. He attended Springfield High School and Southern State Teachers College at Springfield, prior to entering the US Naval Academy, Annapolis, Maryland, on appointment from his native state in 1933. Graduated and commissioned Ensign on June 3, 1937, he subsequently attained the rank of Lieutenant, to date from January 2, 1942.

Following graduation from the Naval Academy in 1937, he had brief duty in USS West Virginia and in July of that year transferred to USS Colorado. Detached from that battleship in December 1938, he continued service afloat until February 1941 attached to USS Chandler. Ordered to the Electric Boat Company, Bayonne, New Jersey, he had fitting out duty with Submarine Chaser Division TWO and joined that division when it was commissioned, February 20, 1941. A month later he became Commanding Officer of Motor Boat Submarine Chaser Division THREE.

Navy Cross: “For heroism in combat with the enemy during the period February 25 to April 10, 1942, as Commanding Officer of the Trabejdor.* While exposed to frequent horizontal and dive bombing attacks by enemy Japanese air forces, Lieutenant DeLong directed the anti-aircraft battery of his ship and conducted operations of strategic importance in the Manila Bay area involving hazardous missions such as to bring great credit to his command and the United States Naval Service.”

Silver Star Medal; “For gallantry and intrepidity in action as Commanding Officer of the USS PT31, while participating in the raid of Port Binanga, June 14, 1942. Having grounded in Subic Bay as a result of engine failure due to gasoline sabotage, Lieutenant DeLong directed the transportation of his crew, by night, through reef-studded waters to the enemy shore, then, to prevent his vessel form falling into enemy hands, destroyed the boat and torpedoes aboard and swam ashore. He and his party, armed only with three .45 calibre pistols, proceeded to the village of Moron, avoiding the enemy offensive against that village, and with Japanese soldiers within 200 yard of the beach, embarked in two banacas and made good their escape. When the bancas capsized in heavy seas and wind, with the men exhausted, Lieutenant DeLong, by his capable leadership, righted the bancas and so encouraged and led his men that without the aid of paddles or sails and by the use of boards alone, they continued to a point behind the USAFFE lines where they disembarked safely.”

He was listed as “missing in action” as of May 6, 1942, having been attached to Motor Squadron THREE at the time of the capitulation of the Naval command at Corregidor, Philippine Islands, and was presumed dead on December 17, 1945. Later evidence was produced proving that he was beheaded on July 2, 1942 in the Garden of Lie Boen Yat, Manado, Philippine Islands, thus his status was changed from presumed dead to determined dead.

In addition to the Navy Cross and the Silver Star Medal, Lieutenant DeLong was entitled to the Purple Heart Medal; the American Defense Service Medal, Fleet Clasp; the Asiatic-Pacific Campaign Medal with two stars; the World War II Victory Medal; and the Philippine Defense Ribbon. He was also entitled to the Army Distinguished Unit Badge with Oak Leaf Cluster.